Within Cloud for Customer workflow rules can be used for many purposes, with a major one being to send notifications when a key event occurs.  Primarily these events were limited to the creation of objects (such as Tickets), and the saving of objects.  However, as part of the latest Cloud for Customer release (1511), the ability to schedule workflow rules was enhanced, and this blog will explain why this is significant.

To provide richer functionality for Cloud for Customer SMS/messaging, SAP has provided the ability to use relative time offsets for business objects.  These relative time offsets are based on the dates and times of the business object, which are now treated as events.  So, for example, the Completion Due date/time of a Ticket is an event.  The “relative time” aspect is the use of “before” and “after”, which behaves exactly as it sounds, and of course the time period can be specified in natural language as with the SLA maintenance.

Consider this example; an organisation has a customer service team that deals in customer Tickets as part of their Service solution.  When a Ticket is created (manually, or automatically by inbound email, portal post, SMS, social media etc), the SLA configuration will automatically allocate a Completion Due date/time of, say, 5 days in the future.

With the best will in the world, sometimes these Tickets can stagnate due to priorities and workload, the ticket could be missed, slip through the cracks, or be too complex to resolve within the SLA.

It was already possible for Tickets breaching their SLA to be escalated, or for some other workflow to be used so that when the due date was reached it would trigger a response, but this was always a reactive response.

Without adding custom date fields and setting up additional SLA rules, being proactive on SLAs was challenging.  In fact, using built in Cloud for Customer analytics functionality was the most effective way to monitor these potential breaches, and that required diligence from the customer service manager or a customer satisfaction team.

Now there is a much better solution!

This enables us to create a rule, for example, to warn a specific employee or the agent processing the ticket that the ticket will breach SLA shortly, using the Completion Due date as the event and using the “before” relative time offset: 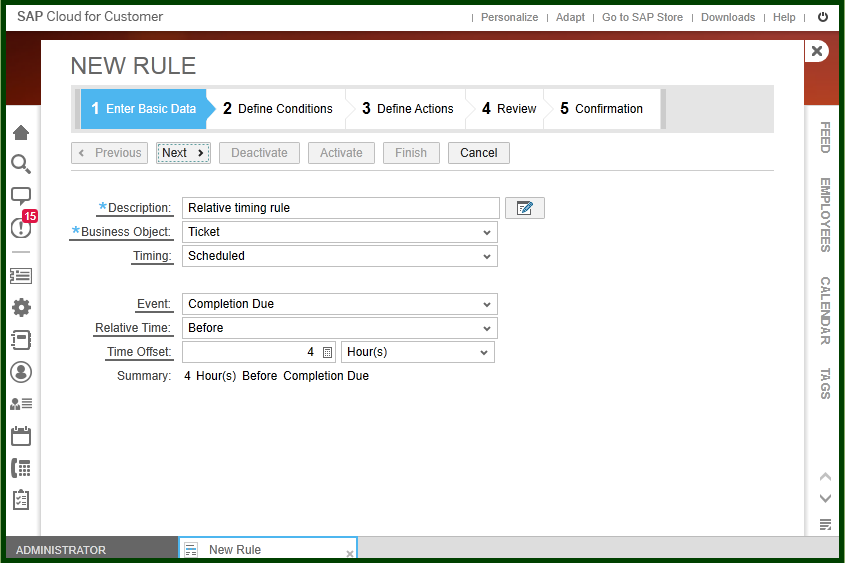 Using the “after” relative time offset works in exactly the same way, and can be used for use cases such as following up on customer satisfaction.

The relative time offset that has been included for SMS/messaging in release 1511 has massive potential to make a difference to the way an organisation uses C4C.  It enables managers and customer service leads to move away from reactive reporting, into a world of pro-active notifications, and that means another happy customer!

Nice description of the issue, thank you.