In SPS 11, we took a break from enhancing the current SQLScript tooling In the Web-Based Development Workbench and really just focused more on the SQLScript language itself.  As you will soon see, the overall theme of the new features for SQLScript is around simplifying the language and making it easier for developers to use.

Filter pushdown for Table User Defined Fucntions(UDF) refers to the concept of consuming a table UDF via a SELECT statement with a WHERE clause.  The filter in the WHERE clause is pushed down into the table UDF execution so that the result set is filtered before it is materialized. We’ve always supported the ability to do filter pushdown with Table User Defined Functions(UDF), but there was a limitation where if you used imperative type logic within the body of your table UDF, then the filter pushdown could not happen.  Now as of SPS11, even if you have imperative type logic within the body, the filter pushdown is now executed before materialization.

As of SPS11, we now support Spatial types and functions within the context of stored procedures. We support the ST_GEOMETRY data type and SQL spatial functions to access and manipulate spatial data.  SQLScript also now supports the objective style function calls, which is needed for some spatial functions.  In the example below,  since the IM_POINT_1 input parameter has a type of ST_GEOMETRY, we can directly call the ST_DIRECTION function of that object.

Another new feature in SPS11, is a proper emptiness check predicate.  We can use the IS_EMPTY() predicate to determine if a table of table variable has any rows.  If the table has rows, it returns true, if otherwise it returns false.  You can use IS_EMPTY in conditions like in IF statements or WHILE loops.  Prior to SPS11, you had to do a SELECT COUNT(*), put that value into a scalar variable, and finally execute your IF statement checking if the variables is greater than 0.  Now your code becomes much more simpler, by simply using the IS_EMPTY() with in an IF statement, as shown below.

One of my favorite new features in SPS11 is what we refer to as Index-based cell access.  This allows you to read and write to any cell of an intermediate table variable or parameter.  Prior to SPS11, you had to write cumbersome code using arrays to achieve the same thing.  Now it is much more simpler and cleaner.  You simply reference the name of the table variable and the column which you want to access separated by a dot(.), followed by the index of the row within brackets.  In the following example, we are simply adding rows directly to the output table parameter. 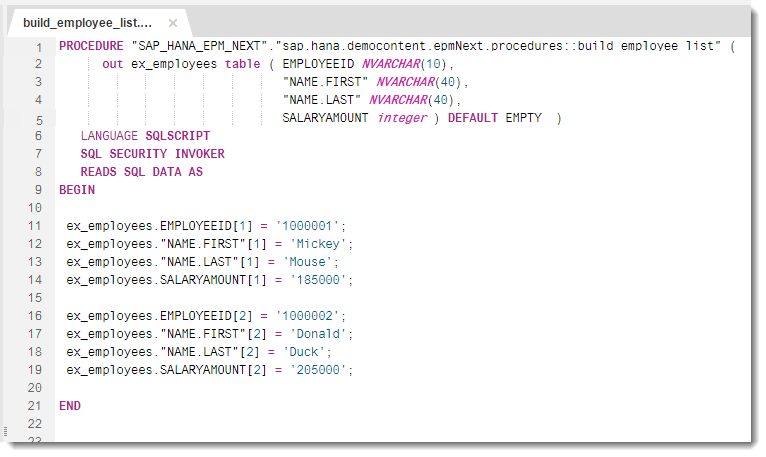 When using dynamic SQL, SQL Injection is a very real problem and it is the responsibility of the developer to make sure he does everything he can to prevent it.  We do not recommend to use dynamic SQL within SQLScript, but there is nothing stopping you from doing so.  So to help with this, we have released a few new built-in procedures which the developer can leverage in his code.

For more information on all of these features, refer to the SQLScript Reference Guide.

Thanks a lot Rich for sharing

Thanks a ton Rich..

Any idea on how the performance compares to SQL queries?

Thanks for the blog on the useful features.

I have a small doubt on the DEFAULT EMPTY. Some how for me it does not work when I tried along with AMDP method definition for exporting parameters . It complains it  is not possible to Default for Exporting parameters