Move over freestyle biking and big-air snowboarding. There’s a new game in town and it’s called the Extreme Sailing Series™.

What is it? Think high-speed Formula One racing – except on water. 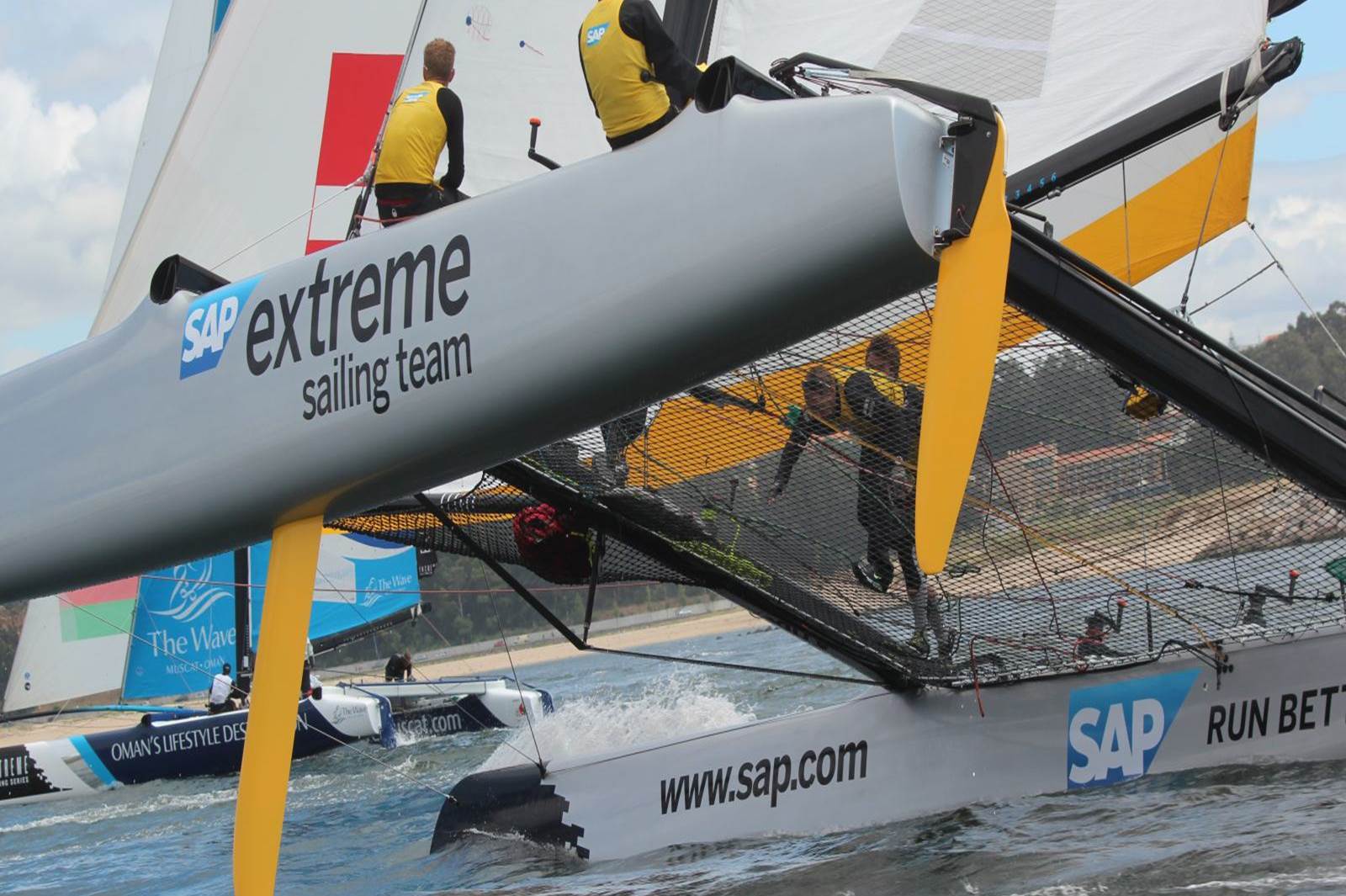 The Extreme Sailing Series™ is an international racing circuit featuring specialized 40-foot catamarans that can literally sail faster than the wind.

Now in only its ninth season, the Extreme Sailing Series™ enjoys a very enthusiastic following. This summer, for example, the circuit visited Hamburg, Germany. An estimated 44,500 spectators lined the city’s revitalized waterfront to watch the crews battle each other – and up to 30 knot winds – over an extremely tight racecourse.

The Extreme Sailing Series™ appears to be growing its new sport with two key principles in mind: Pick fantastic locations for the races and find great ways to engage with the fans.

Taking a New Tack to an Old Sport

Competitive sailing has been around for a long, long time. But turning sailing into a fast-paced spectator sport?

“When we started, it was a ground-breaking innovation in sailing,” says Phil Lawrence, race director of the Extreme Sailing Series™. “We decided to race in small harbors and bays inside iconic cities – we call it stadium sailing.”

Picking the right cities has been vital to the sport’s success. “We need a good piece of water in the center of a tier-one city,” Lawrence explains. “It needs to be deep enough so we get the boats very close to shore and to the spectators.”

These criteria have resulted in some exotic venues for the 2015 racing season – cities like Singapore and Istanbul, for example.

Educating a Fan Base

The big idea behind stadium sailing is to bring the action as close to the fans as possible. But as race organizers point out, sailing is a complex sport that is traditionally hard to understand, no matter how near the boats are to shore.

Andy Tourell, event director of the Extreme Sailing Series™, estimates that 95% of the spectators are not sailors themselves. “To increase the fan base, people need to be able to understand the sport,” Tourell says.

For the Extreme Sailing Series™, help is coming from what might seem an unlikely source – software.

Lawrence and Tourell see sailing analytics as an effective tool for engaging and educating their fans. 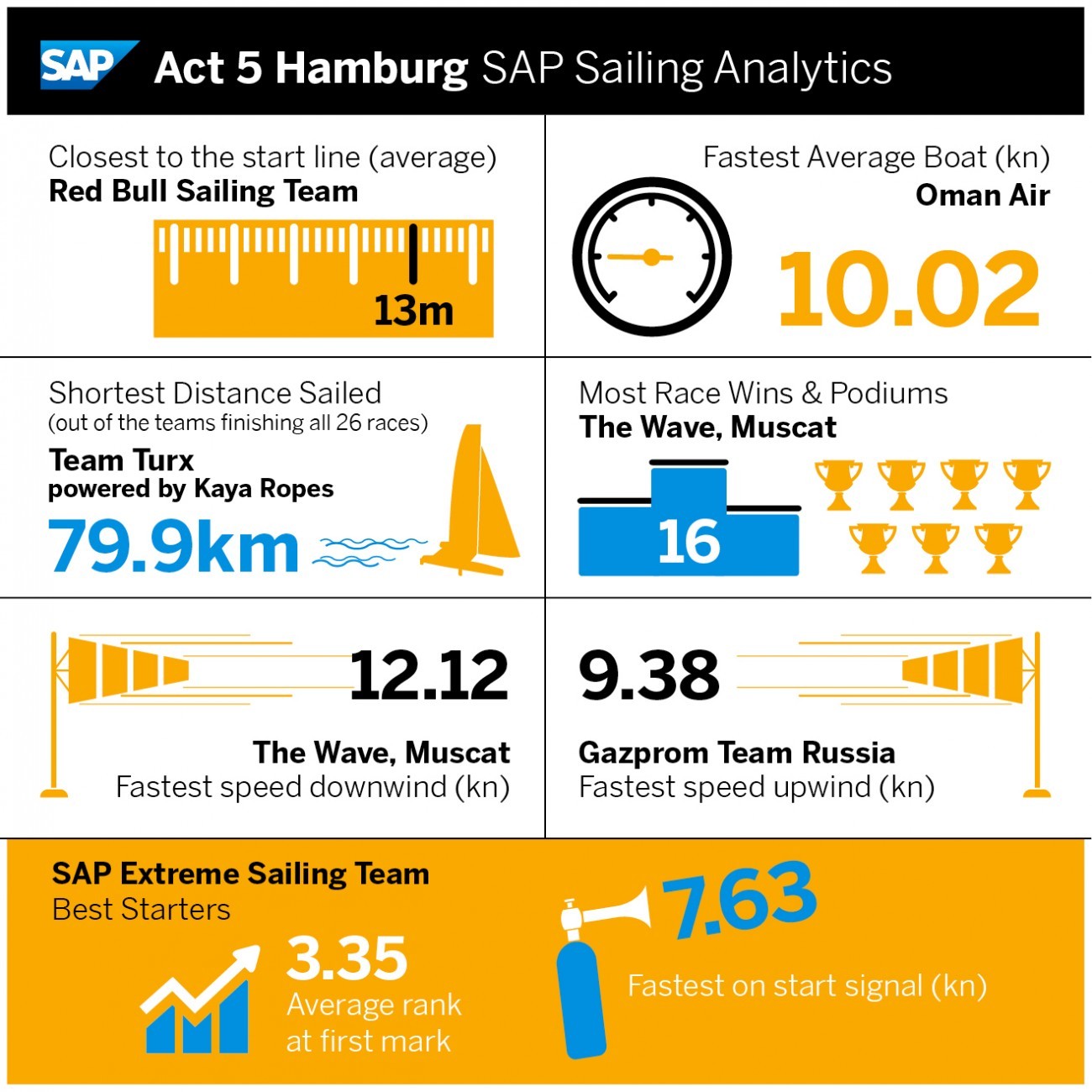 Each of the Extreme 40 catamarans, for example, is outfitted with a GPS tracking module that provides exact positioning. Sensors installed on buoys throughout the racecourse convey live wind information. Combining this data can reveal how fast each boat is going, how changing winds are affecting the race, and what team is currently in the lead.

This information is displayed at the venues and used by the broadcast media to help explain what the video coverage of the race is showing.

Later, sailing fans can go to the Extreme Sailing Series™’ Web site to see analysis of the completed event.

“Technology is making the sport simpler for everyone,” says Tourell. This includes the administrators and sailors.

Organizers use the SAP software platform to layout the courses, manage start times, and maintain safety during the races. “The racing data is displayed on my tablet in real-time,” says Lawrence, who is responsible for everything that occurs during the competition. “I can react immediately and make changes if necessary to ensure a fair and safe race.”

“We believe technology also helps us perform better,” adds Ramus Køstner, co-skipper of the SAP Extreme Sailing Team – one of the eight full-season teams that participate in the Extreme Sailing Series™. Coaches can provide the crew pre-race updates on wind speeds and directions. Then, after an event, the sailors rely on analytics powered by SAP HANA platform and SAP BusinessObjects business intelligence solutions to replay the action and study their performance.

The fan base of the Extreme Sailing Series™ continues to grow, and the sport’s popularity should be on full display this week at Australia’s Sydney Harbor. Thousands are expected at the final event of the 2015 season where spectators will watch teams race against the famous backdrop of the city’s Opera House and Sydney Harbour Bridge.

You can’t get more iconic than that.Please join me on Twitter at @JohnGWard3.

Watch this video to see more on how the Extreme Sailing Series™ is using sailing analytics.