NBA – one of the very few abbreviation which does not require expansion most of the times because of its humongous fame all over the world. It has more than 21 million fans on Facebook and 17 million followers on Twitter, having its Playoff Season as one of the most sought after sports seasons around the globe.

How would it be to visualize the entire data set of NBA from 2006 to 2011 using SAP Design Studio?

Scroll down the blog to view Data Analysis of how Dallas Mavericks won the NBA Championship in 2011, how Carmelo Anthony performed in NBA 2006 Season, how NBA All Stars 2008-09 was played and lot more.

This Package of Visualization contains 5 Applications with one HOME Application.

All 5 Applications have a “HOME” Icon in their Header, which when clicked will take you to the HOME Application in a new window. 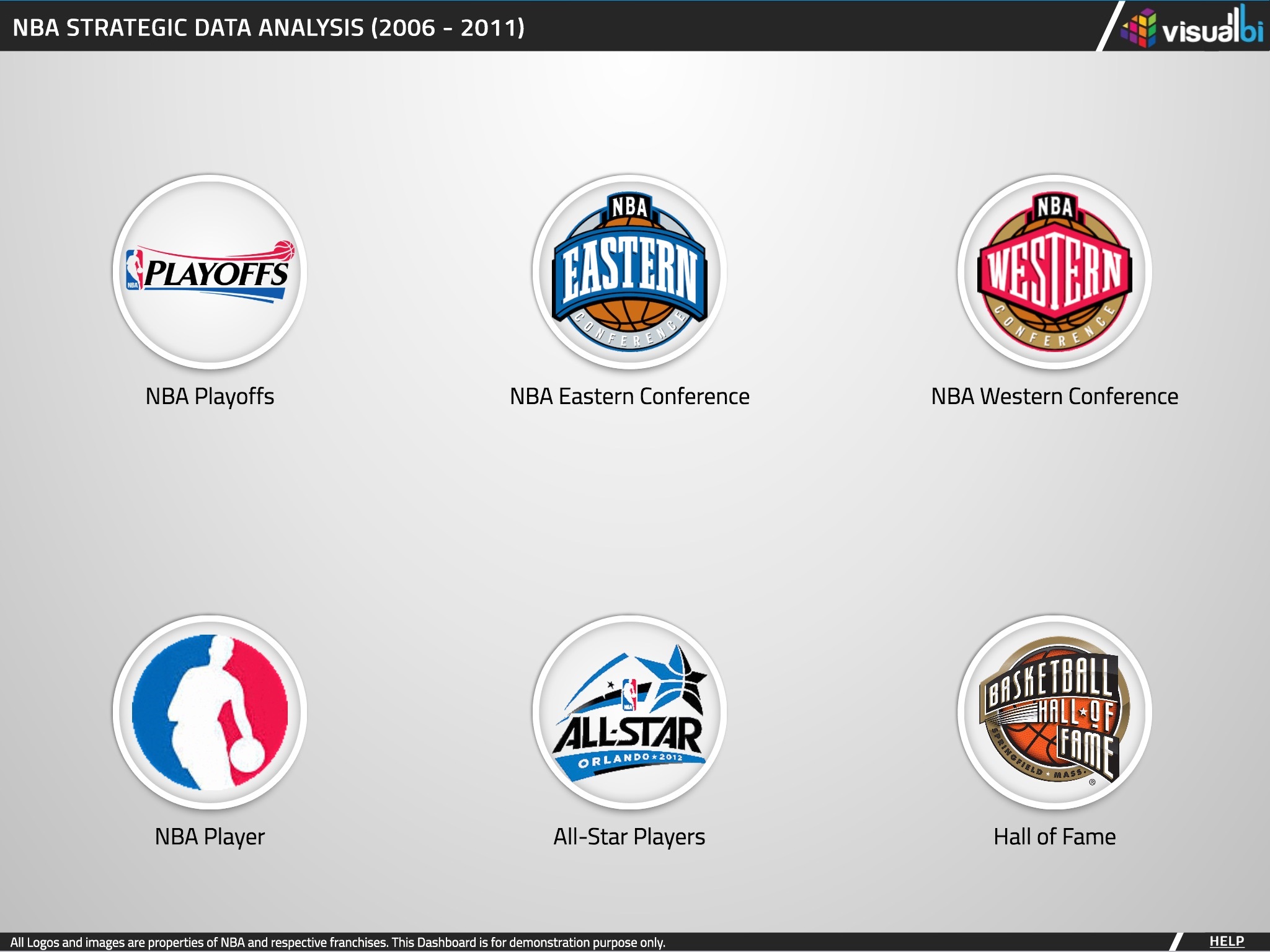 This application gives an overall analysis of how the Playoffs for the particular year was held. Statistical data like Wins, Losses, GB and PCT% of the Top 8 teams of each conference can be analysed using this application. 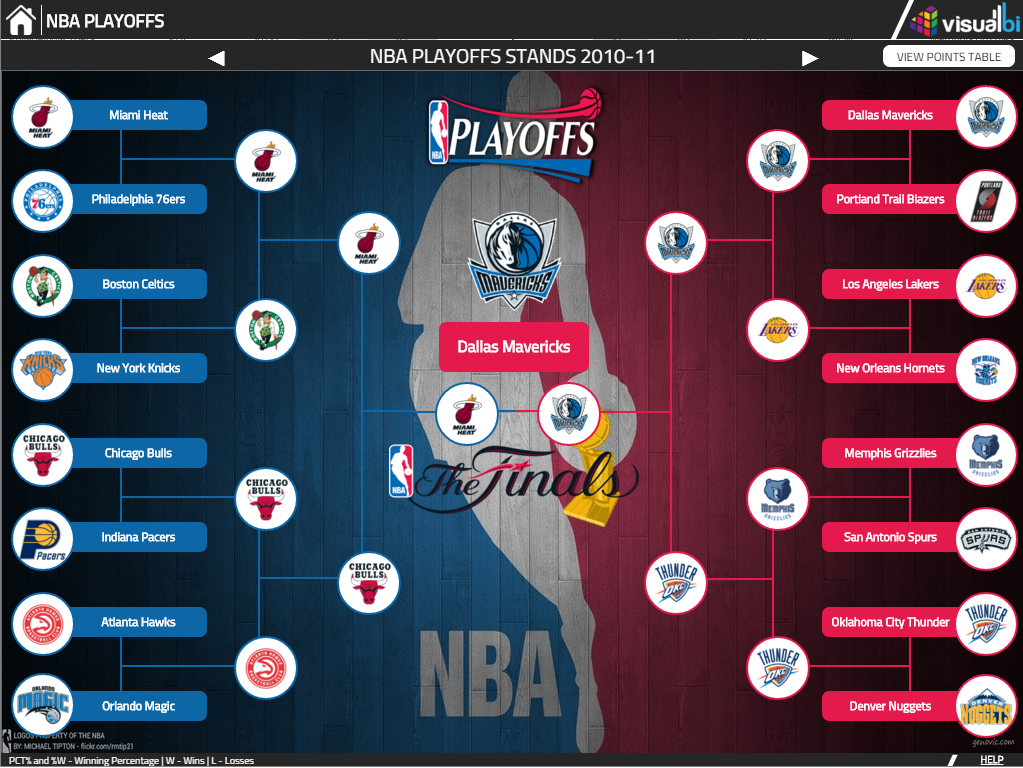 When the VIEW POINTS TABLE icon is clicked: 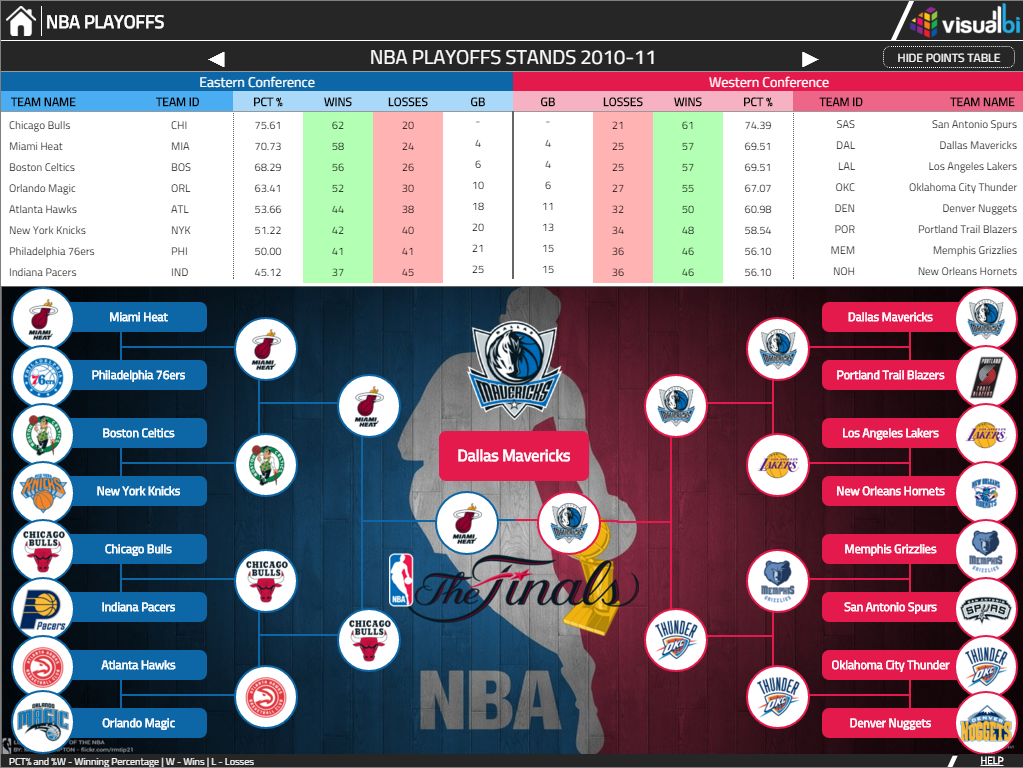 In this application, the statistics can be analysed based on each conference separately, either Eastern Conference or Western Conference. In each of the conference views, the teams are divided into 3 divisions and analysis of the teams is based on 8 Performance Indicators, which are grouped division wise.

An important factor used in this analysis and All Stars Game Analysis is FOUR FACTORS OF SUCCESS which was developed by Dean Oliver. This is calculated by the formula: 40% of Shooting + 25% Turnovers + 20% Rebounds + 15% Free Throws. 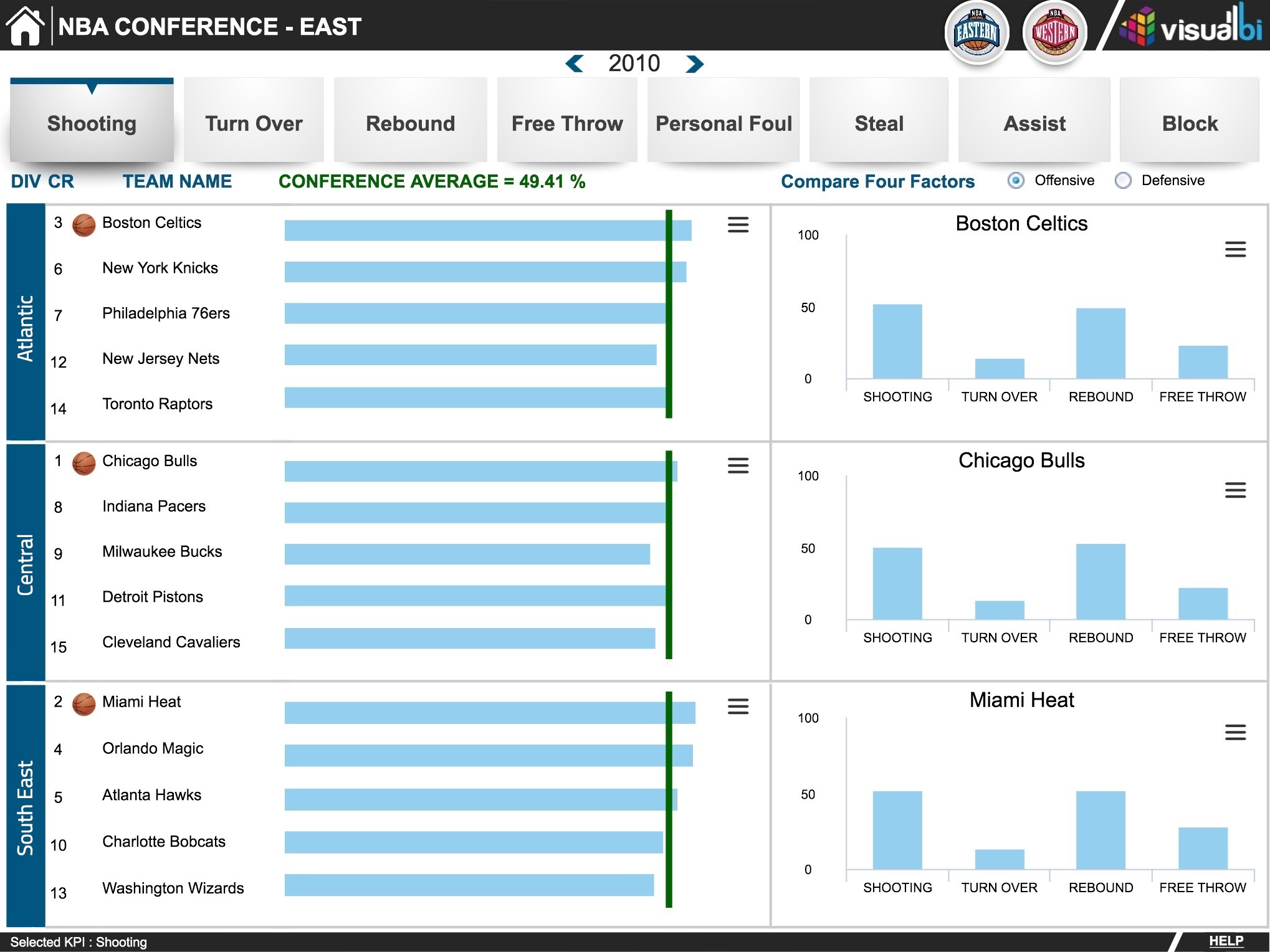 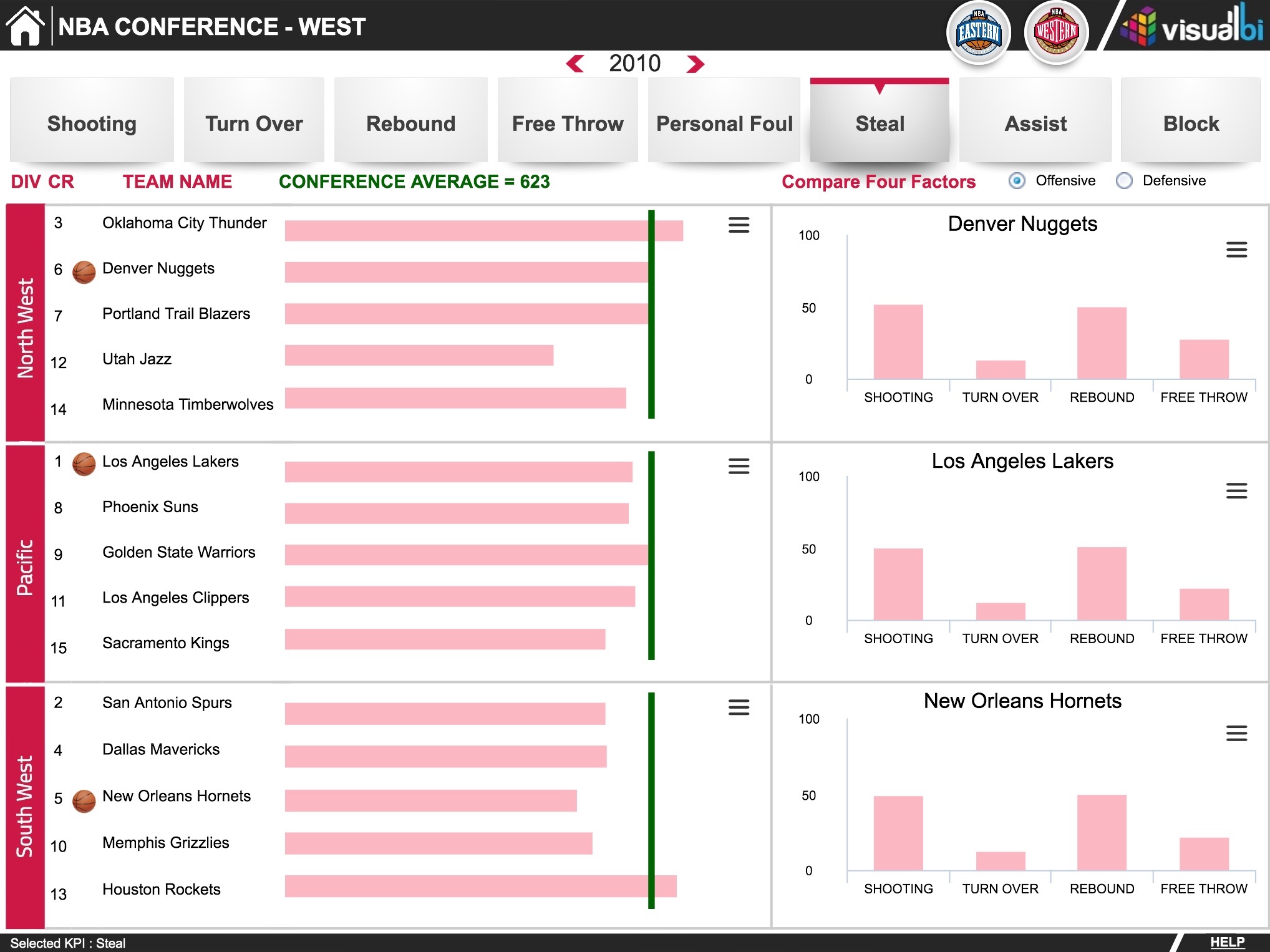 This application helps you to analyse a particular player’s performance and his contribution from 2006 – 2011 in more than one team. The Head to Head compare option is also available where one player is the selected player by default and you can choose the other player for comparison. 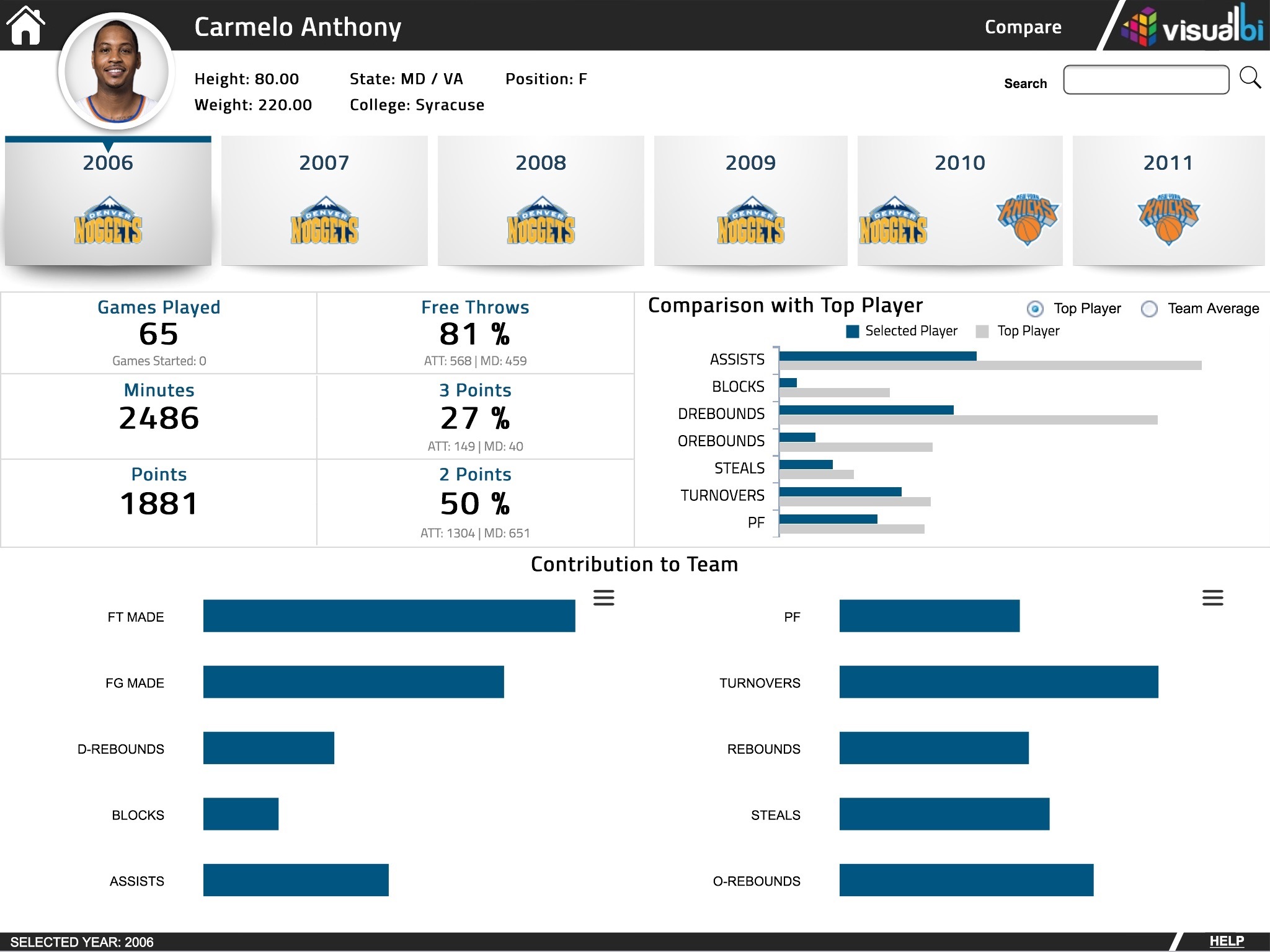 In this application, 12 players who played for Eastern conference and 12 Players who played for Western conference in the All Stars game has been listed according to their Four Factors percentage – from highest on the top to the lowest at the bottom. Three players, along with their Game Statistics are displayed in one Page of every conference. When swiped Up/Down, the statistics of other players can be analysed. 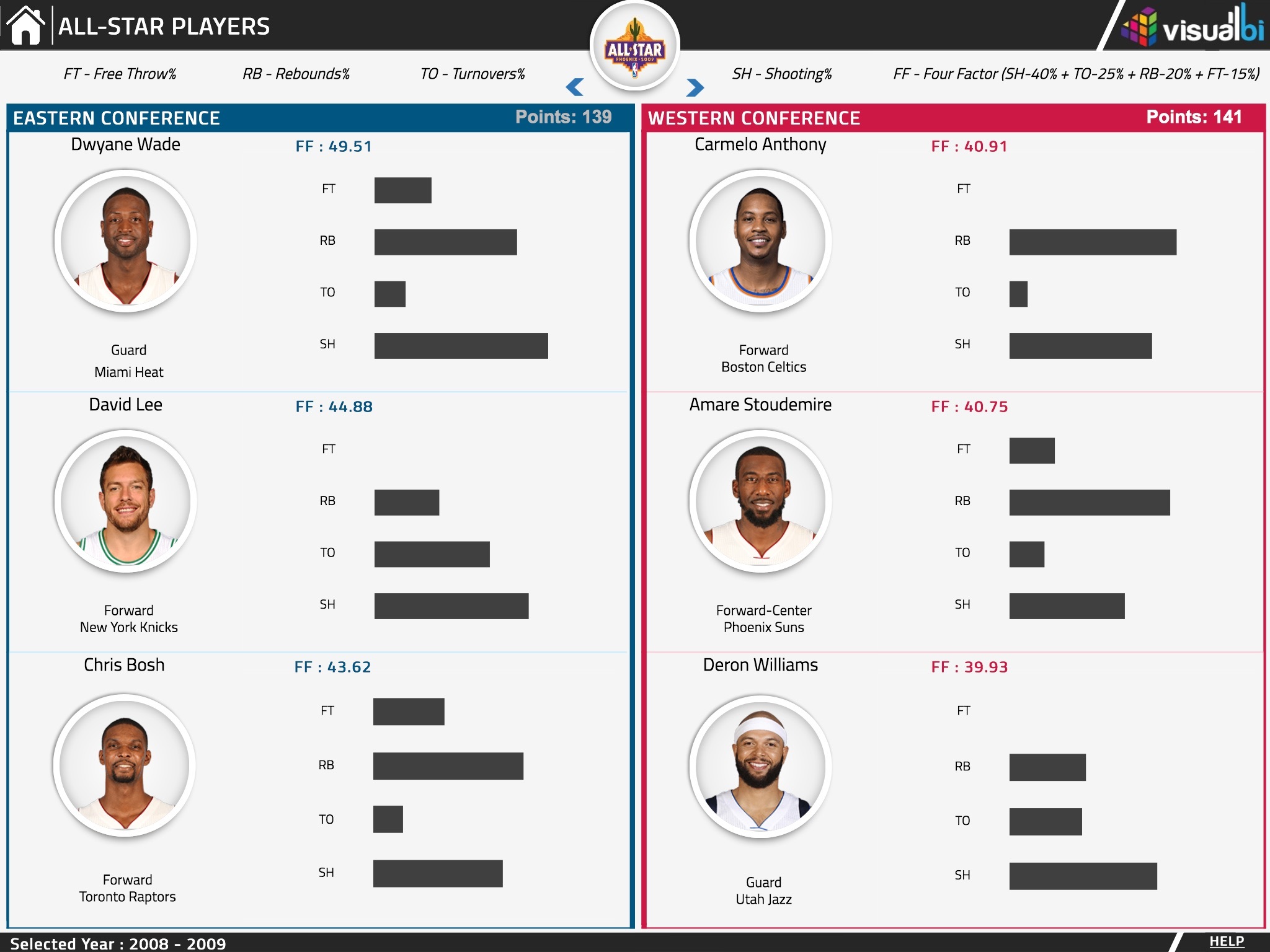 This application can be used to analyse the data of the Basket Ball Hall of Fame decade/year wise. You can also drill down to a particular Role such as players, coaches, contributors, referees and teams. 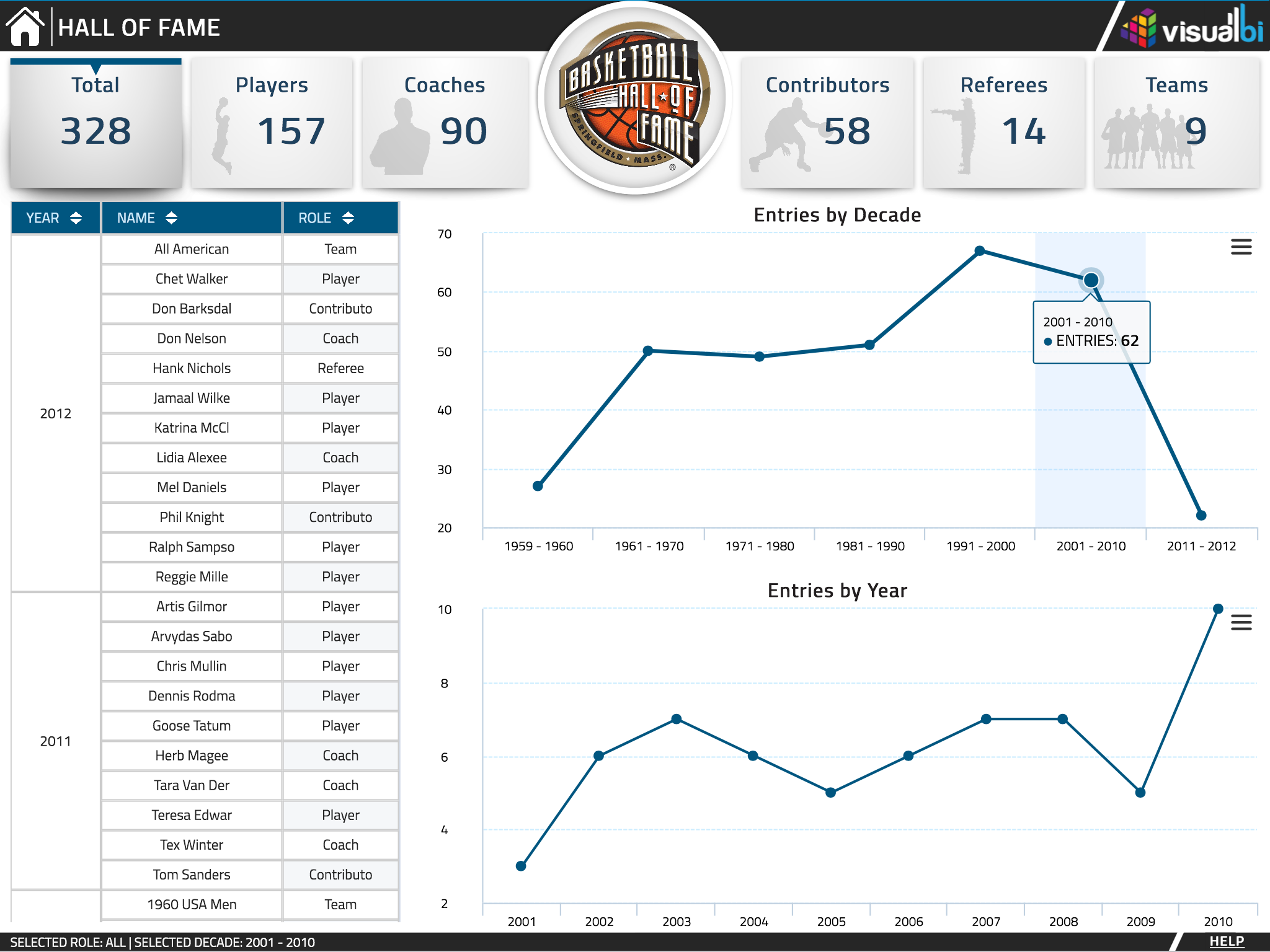 Similar visualizations and stories can be developed for any sport and can be used for promoting the sport among the followers and to the sponsors who are ready to invest their money for the sport. Even to those who are not very familiar with the sport can also understand the data and compare the teams or players when it is visualized effectively. We have done this package of Analysis Applications to demonstrate that Sport Analytics is effectively possible using Design Studio.

Disclaimer: The images and logos used are properties of NBA and respective franchises. These applications are designed only for demonstrative purposes.