Which font are you – ABAP developers using in code editor (either in SAP GUI SE38/SE80/SE24… or in Eclipse IDE)?

I have done little research in other programming languages and I found that one of the most preffered non-default one is called Consolas.

and here is Consolas:

Font settings can be found via button in right bottom corner of editor:

Consolas of course 🙂 It's easier to read the O0 difference

Looks nice too! I will try it later 🙂

I cannot find it in my list of available fonts. Do i need to install it somewhere?

The font can be found here:

How to install it on Windows:

Thanks for the link 🙂

Looks like something good came out of Vista after all! 😛

Thank you Tomas. Great one.

I always deal with the 'Code templates' only.

Will surely make a note to explore these other existing Options as well.

Additional tip: You can set the font size there as well. Useful for those of you enforced to write methods not longer than two times the screen size 😆

Tricking the system 😎 But how do you trick the static code analysers? 😕

Send in a screenshot 😎

Generally I like it. However what I don't like that '|' becomes little bit italic and looks strange for headers for example.

BTW anybody knows how ABAP editor allows font selection? In Word I have about 100 available fonts, in ABAP editor config only about 20. 🙁

It is because comments are by default italic 🙂 You can set it in settings.

And try uncheck "Show monospaced fonts only". It limits my selection of fonts too...

Didn't notice this italic flag before. I just changed the first one (Breakpoint), and there it was not editable. After changing for comments it works fine. Thanks.

Just noticed that you have the light yellow background for the Strings. Tried out and like it ... so I'll keep it 🙂

Some of my colleague used it for some other development area. Probable it's better for the eyes, but somehow I already got used to the light background. For me dark background looks like a telnet session 🙂

Peter Inotai wrote: For me dark background looks like a telnet session 🙂

It's cool for sure 🙂

Maybe I'll give a try .... but I'm quite sure if I have to discuss some code with my colleagues and I have this dark background, they would be lost/freak out 🙂

the first Blue Crystal version was indeed a bit shock, but they repaired the icons and now it looks much better 😉

do you use Windows?

I tried to use the dark theme in Eclipse on Windows, but some elements stay light.

Did you have this problem too?

Yes, some parts look crapy on windows, but in my case I also use dark theme on windows, some adjustments of windows screen elements and it looks good. The problem with eclipse is that sometimes they use colors from theme, and sometimes from OS preferences ( for ex. Login window) and then it looks terrible. You have to adjust OS settings then to get rid of such prinlems.

I was experimenting with dark theme too, but did not like it personally. As a day light programmer 🙂 defaultish theme is more readable, with better contrast for me.

But dark theme indeed looks cool! and is used and works for many programmers.

Hm, this might just persuade me to make a switch from the plain text editor. 🙂

Normally i use this one.

Thanks for sharing, I'll test it 🙂

I have changed my SAP editor settings, this is what it looks right now 😎 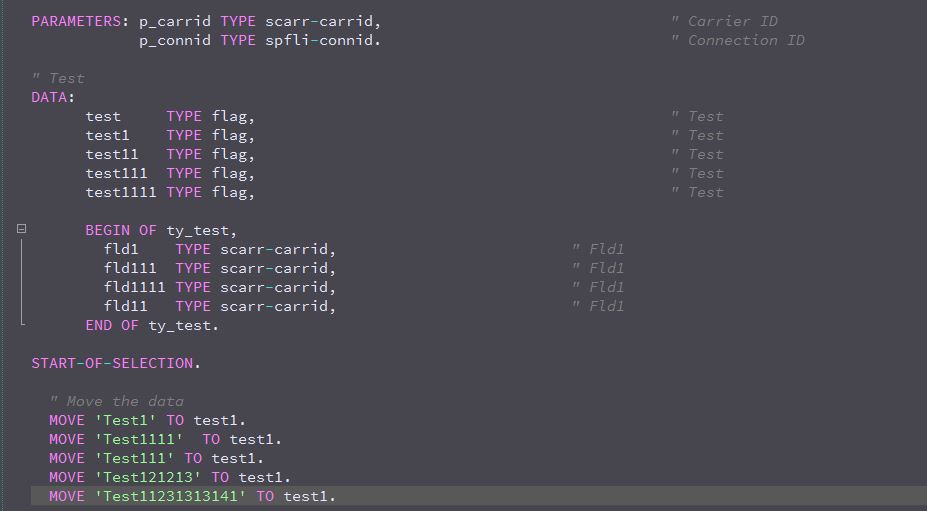 Now the last piece of the jigsaw, where are these settings stored? I am sure i read it somewhere but cannot seem to find it now.

Hi Suhas Saha, settings are stored in files abap_spec.xml and abap_user.xml in path:

nice blog! I also use Consolas and dark background. For those who still use SAP GUI, here`s the guide from my pal Bruno Lucattelli :

I agree, Bruno just did a very good job on that!

After years of using Courier New...it's time to try Consolas.

I'm one of the developers who still prefer the SAP GUI instead of the Eclipse IDE. Another thing I have to try deeper...

Consolas is better  🙂 . Very good and useful blog, I will surely try it for my editor. Thanks 🙂 🙂 .