This is a step-by-step example to build an alternative visualization to the “trellis” available in SAP Lumira or other SAP products that use D3 for visualization.  It’s also an introduction to the D3-specific idiom for grouped visualizations.  Rather than using a conventional loop around the outside of a visualization, D3 prefers to structure its loops passed in as data, as in “data-driven”.

This blog covers a portion of my SAP TechEd 2015 presentation.

You can see the Lumira trellis here, using a donut chart. Note that we can only fit four charts on the screen before they start going off-screen. That makes it difficult to compare Q1 last year to Q1 this year – you can’t see them at the same time, and the slider bar at the bottom is an awkward workaround. They want a more sensible arrangement of four quarters across, arranged so one row is one year.

As a programmer, what do you do when you need to take one object and make several of them?  Easy, you just put a loop around it.  Maybe add a level of abstraction and some parameters, call it as a function n times. Something like this:

The first time I ran into this problem, that’s exactly what I started to do.  I nested my data by quarter using D3’s awesome nest() function.  Then I got the unique values from the data set using D3 keys() function.  Doing this, I felt like I was thinking in D3.  Then I started to write two layers of loops …but wait.

That seems wrong.  Reading the code of the many visualizations in the D3 gallery, one of the striking things I’d noticed is the absence of “for” loops.  You hardly ever see one, and certainly not two in the same visualization.

So if we’re not going to use a “for” loop, how can we make multiples of the visualization?  We’ll use data.  For SQL and Business Intelligence people, the best analogy is that we “join” the data with another data set to make it multiply like a Cartesian.

In the table below, here is the code for a single pie chart (or donut). I start out passing in just one quarter of data.

What does this code do?  It creates a collection of arcs by passing in my data through D3’s built-in pie function.

Now let’s look at the Multi-Pie code. We will call the smaller pie charts mpie, for multi-pie.

Notice that we’re no longer adding the arcs to the vis, the main visualization object, but to the four mpie elements instead.  D3 has this multiplicity built in.

After I do this, there are four charts on the page, stacked on top of each other.  But it looks like just one pie chart!  How can I tell if it’s working? 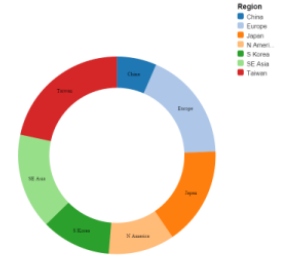 Right-click on the chart and choose Inspect Element. That brings up the Elements tab, where you will see your vis object containing four mpie-class objects.

Now that we have four charts, we want to un-stack them and see them side-by-side. We resize the charts by dividing height by 2, width by 2. (I don’t show you code for that)

Then we add two more lines of code to spread out those four charts. The first line creates an array locs, to define coordinates where we want the charts.

The other code addition, transform, tells D3 to “slide” the four charts to those coordinates.  It’s a “d” function – for each item d in the data set, which is 0-1-2-3, we pick up the right location for the chart.  Note the math term “translate” in the transform function – “push” or “slide” is a clearer word.

Now we have four identical charts. 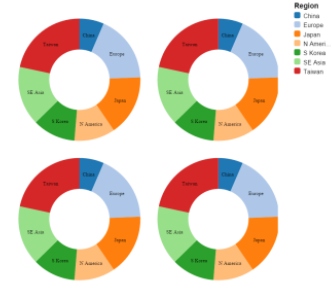 At this point, we want different data in each graph.  Remember we started out with just one quarter of data.

Now we add the quarter column to the data set, and adjust the pie function to step through all four quarters of the data.  To get the data split by quarter, we need a nest() statement. I want each data element from nest() use a consistent name, so I’ll be using nest with the entries() method (not map()).

Inside our mpie-drawing, we used to just pass the variable dataQ1.  Now we have to pass in a subset of the data; and to define it we’re using another d-function. The chart requires the values under the quarter’s key – dataNested[d].values.  That’s terrible to explain in words, but a table helps a lot:

At the moment, the d variable inside mpie.selectAll() is stepping through the data we joined to mpie in step 1 – [0,1,2,3].  That takes advantage of JavaScript’s flexible syntax, where you could reference by number [0] or by a text associative array [“FY15Q2“].  That array notation isn’t very common in SQL or other syntax familiar to Business Intelligence users, but at least one thing is: the dot notation indicating levels. Schema.table.column in SQL traverses the objects in a database in the same way dataNested.entries[0].Sales traverses a data structure to return a numeric values for sales.

In that last example, you might notice that the “d” function also has an “i” in it: function (d,i) {}. Why? No reason except to be instructive for new D3 users.  The convention is that d steps you through the data elements you’re joining to while i provides a numeric index.

Now that we added these two code elements, we have four charts with four different sets of data. 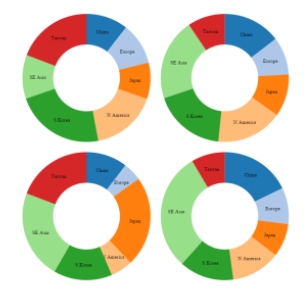 Now here’s our final step.  The users didn’t want four charts.  They wanted four from last year, and the current year which is two quarters so far. You’ll have to resize your charts again to fit four across (not shown).

Then we replace our static array with the quarters.  Those are just the unique values from the nested data; we can get them with the built-in D3 function keys().

So we replace the static array with our array of quarters, and flesh out our array of locations.  Now we have our yearly series like the users requested.

Summing up in terms familiar to Business Intelligence and SQL users:

The code for these examples is attached below.  Due to restrictions on file types available for upload, you will have to rename the .js files and .csv files for your operating system.

Excellent tutorial. Thanks. In my case, each chart data comes from a different JSON file. I am reading the data in this manner:

At the moment, I am simply duplicating code. Can you suggest how to incorporate your method? Thanks.