System Conversion to SAP S/4HANA: SUM is the tool

15 23 24,098
This blog discusses the technical aspects of Software Update Manager (SUM) for a
System Conversion: the transition of an existing SAP ECC system to SAP S/4HANA.

Readers should be familiar with the transition paths to SAP S/4HANA, like described in https://blogs.sap.com/2016/11/02/sap-s4hana-system-conversion-at-a-glance/

System Conversion: SUM 2.0 is the tool for the transition to SAP S/4HANA on premise

The data conversion is partly triggered by the SUM, partly an activity after the SUM run (for FIN and ML data: IMG activities).

Important:
It is relevant for all target systems based on SAP NetWeaver 7.5 (also for systems part of SAP Business Suite 7 Innovations 2016, like SAP ECC 6.0 EHP 8) that the source system has to be already on Unicode. 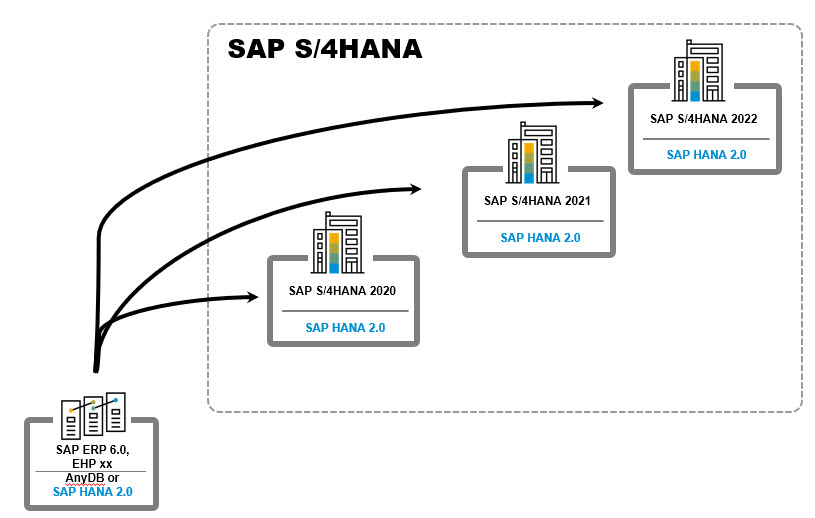 Hope you are doing fine,

great post... all this is now more clear that is also presented on the S/4HANA implementation openSAP course. thank you for sharing

For customer starting from 4.6c on anyDB, it is better to do the following steps, right?

Well explained, Thanks a lot Boris!

Where I get more details on post processing / Data conversion ?

I really like the way you explain things! This blog makes understanding of system conversion to s/4hana very simple. Everyone knows practically converting traditional ERP system to s/4hana system is not so simple. 😛

I really appreciate simplicity you have kept in explaining complex things from the beginning.

I'm suprised that if I want to convert my ERP to S4HANA with System Move I cannot have HANA as a source database. What's the reason? conversion + system move is an advantage if we want to move to a Hyperscaler but if you are already in HANA you cannot do it

DMO does only allow heterogenous migrations, same applies for "DMO with system move".

Is there any plan to enable DMO with System Move using HANA as a source? It's strange to loose a migration option for being already in HANA is a handicap for many customers like my company

I would not state that you loose a migration option, but I see your point. As far as I know, there is currently no plan to enable the homogenous migration case with SUM. I am not aware of a one-step procedure in this case. If I find a proposal other that the two-steps you listed, I will let you know.

I agree with Antonio , we have a similar business need where it would have been nice to perform homogeneous brownfield system conversion  with system move & inline SID conversion , for example going from BSoH-ECC SID:EC1 with hostname (distributed hostnames: sapec1* , onprem/hyperscaler)  to S4HANA-SID:S41 (distributed hostnames:saps41* , onprem/hyperscaler)

Wanted to do a mention to express there are more similar needs and bring to SAP's attention.