I had a good, productive conversation with SAP Mentor Steve Rumsby, who is both SAP Technical Manager at the University of Warwick, SAP Screen Personas expert, and first ever Chair of the newly-formed UX SIG (Special Interest Group) in the UK and Ireland SAP User Group.

Steve practises what he preaches: at the University of Warwick, Steve has transformed users’ experience by implementing SAP Screen Personas, to provide some radical improvements. One example that impressed me (admittedly as a Personas ignoramus) was this: PO Quick Lookup – YouTube

(There’s also a slide deck on this: http://www.slideshare.net/mobile/SteveRumsby/university-of-warwick-personas-coinnovation-project-35656852 ).

Crucially, this is not about sexy colours and background images, but about making life easier, more productive, and more intuitive for the normal SAP GUI user. During his lecture on SAP Screen Personas, which I also attended, Steve said that with normal SAP GUI, some users were refusing to open SAP GUI at all, asking colleagues to do the work for them, whereas with his Personas implementation, users were asking how they could start using the system.

The next steps are to make the experience more UI5 and Fiori-like, but staying within SAP GUI. (Like this: Using SAPUI5 charts in Personas Flavours ).

He explained that the SIG was formed because he found himself addressing (often overlapping) UX and UI topics at different existing SIGs. At present, they have 2 face-to-face meetings per year, along with with a number of Webinars. Their most recent face to face was  about design theory – principles of UX, end user requirements, etc – rather than about a specific UI technology.  Steve stressed that this is an important part of their ethos:

Too often, there is a temptation to latch on to an interesting UI technology, and think “What can we do with this?” In fact, a good user experience starts with the question : “What is the user trying to achieve?” “What is preventing him from doing this quickly and efficiently?” Very often the real root cause of the user’s problems is not a UI technology problem – it ‘s a business process problem. However, this only becomes apparent when you examine the process from the end user’s prespective.

I was glad to hear Steve say this, because it squares strongly with our official strategy, and also with my own experiences talking to customers.

Not surprisingly, we have both watched Sam Yen talking about this (to Simon Kemp) at Teched LV: Scaling User Experience Design in the Enterprise

Here, Sam explains the difference between finding the right problem to solve – ie Design Thinking – which is about observing how the user actually works; versus solving the problem correctly – ie Design DOing – which requires a knowledge of what UI technologies are available.

If you are a customer in the UK or Ireland, I would strongly recommend that you consider joining the user group. And if you are already a member, consider what a better understanding of user experience could mean for your users, their productivity, and their job satisfaction. For more information: https://www.sapusers.org/learn/sigs/user-experience . 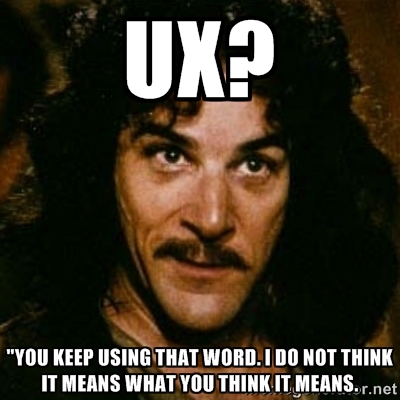 (Note: Steve was not responsible for this image. That was me).

Steve, congrats and best wishes! Let's talk, I am always open for coopeartion with SIGs in other countries.