Now in its second year the SAP Architects and Developers Conference run in Sydney on 23-24 November has been a great sucess and I can confidently say that after day one. 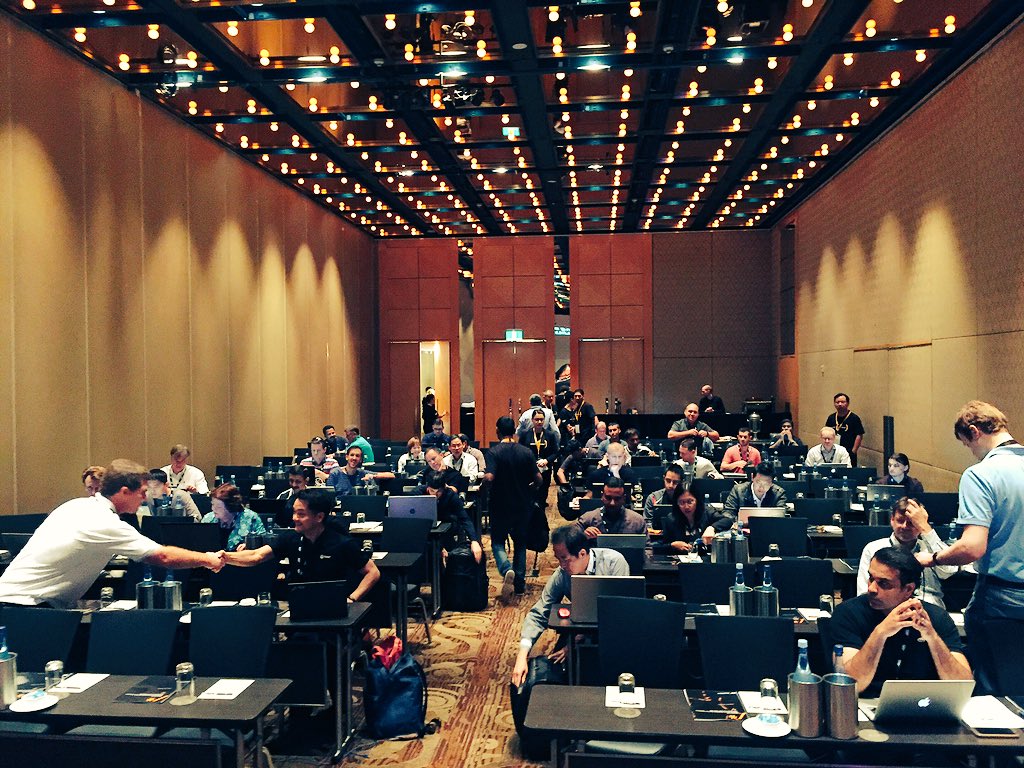 Kicking off with a keynote around the Hana Cloud Platform, Ian Kimbel gave us a great demo of SAP Cloud for Analytics showing how the boardroom of the future might right a meeting with instant insight into current deals and projections of future earnings.

Dirk Basenach gave an overview of the capabilities of the Hana Cloud Platform covering everything that Björn Goerke did in Barcelona TechEd keynote without the Mission to Mars.

Sometimes you need to near a message a couple of times for it to sink in but for me the highlight of the keynote was the capabilities of the Hana Cloud Connector and while that might seem like a strange piece to focus on the fact that it was able to connect all types of connection from oData to RFC suddenly made that a no brainer. It removes the excuse of not being able to surface data or innovation onto the cloud and leave the core stable.

All the acronymns: FLP on HCP

I had chosen a track of workshops for the day and after the keynote I was immersed in FLP for HCP. Our HCP trial accounts were upgraded with a 90 day trial of Fiori on HCP. The hands on session took us through changing personalising the FLP and adding a new custom static app to the launch pad and then extending an app to provide custom functionality. This app was also then added to the FLP.

It was a great session for developer like me who is very focused on “Custom Fiori Development” [1] who doesn’t play with either HCP or the Configuration of FLP on a day to day basis.

Lunch was next and while it felt early and long it was a great chance to network over a meal rather than a frantic packed schedule that other events can be. While it felt odd at first, there were many great conversations taking place.

In the next hands on for me was the nodejs for sap hana features that are coming in Hana SP11. Thomas Jung gave a great talk to the architecture of what having node in the hana app server meant and I found myself nodding along. Especially when he was talking about git and command line – a couple of subjects that I have been evangelising at my teched community sessions over the past two years. I am very excited about what new opportunites are ahead with SAP embracing node.

End to End: Hana to Fiori

My last hands on for the day was the end to end from Hana to Fiori. This saw us developing views on hana, exposing them with OData, connecting them with the Hana Cloud connector and then building a simple master-detail Fiori app to consume the OData service.

While it was a very much a cut a paste exercise it was instructive to see how all the pieces come together.

To keep us from beer we had Simon Dale host a few examples of the technology we had been hearing about all day. Firstly from Keytree and their Las Vegas Demo Jam. Secondly from La Trobe university and their Simple Finance implementation story and lastly from a partner who gave us a hint of new exciting service without telling or showing much. I was able to quiz him later and found that it was still very much under wraps and was to be announced ‘soon’.

To top all that Brian Pagano gave a very interesting talk about the architecture of Barcelona and compared that to the journey that we are on as Software Architects and Developers.

Of course much of the value of events like these is catching up with colleagues and the conversations over a beer at the end of the day. It was in these conversations that experiences and ideas are shared.

If you haven’t yet made it to these conferences, you are missing a vital element that is enabling you to stay current in the new technologies.

Book it in for next year.

Thanks for the nice recap, Nigel! Sounds like a great event! I agree that one of the best part of attending these live events is the chance to meet new people, and catch up with old friends and acquaintances.