Towards 2016 ; Browser Support for SAP technology

Back to the Past

15 years ago in (2000) SAP announced the awesomely colorful mySAP.com  workplace, which promised the following:

“With mySAP.com Workplace, people work better and faster. With just a click of the mouse, productivity increases. Using an ordinary Web browser, you can complete day-to-day tasks – direct from your desktop, from anywhere in the world.” 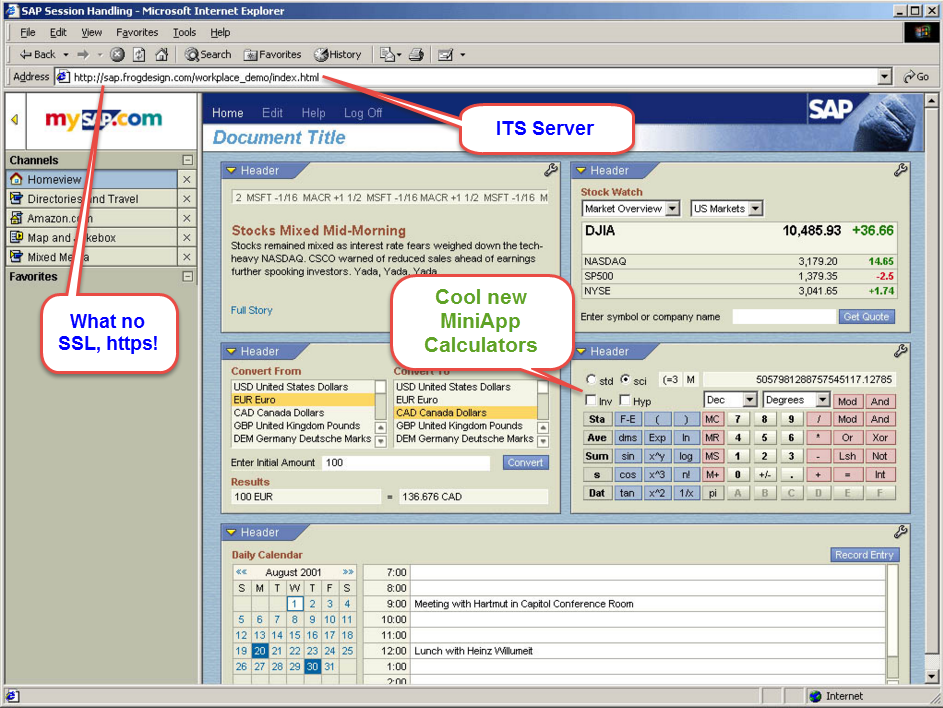 ( This was SAP’s first “portal” before SAP purchased Top Tier Portal re-branded it SAP Enterprise 5.0 portal only then to rewrite it with in release 6, creating the  product SAP Netweaver Portal , now renamed again to SAP Enterprise Portal)

“productivity increases“; what more could you ask for?  A Calculator, Currency Conversion, Stock market ticker, and News updates – even a Calendar; as Emmet would say “completely awesome”.

SAP’s technology was at the time, ahead of its time, but in SAP’s own special, oddly colorful Lego block way.

2015: Stating the obvious, dedicated mobile phone apps featuring new and integrated apps such delivered via Fiori are now pervasive;  – changing long entrenched work practices  as knowledge workers are being decoupled from the necessity of being tethered to a desk with a phone near a printers and the trusty old desktop. The working life of Dilbert may be a thing of the past

As a consultant I’ve been exposed to a significant number of SAP sites, from the biggest to the smallest, from billions of dialog steps week down to 478 dialog steps week. The largest corporate to small SMEs, have very little in common except one thing, the problem that unites them all:

– the endemic scourge of rendering problems.

These problems are regularly compounded by the chunks of time required to isolate and explain the issue. I wonder how many Apollo programs worth of effort has been consumed by IT organizations around the globe responding browser rendering glitches.

Related is the important components of security cryptography, keys, ciphers and single sign-on requirements ;  what is accepted with older browsers is blocked with newer release.  Companies need to find solutions for 2 diametrically apposed requirements:

These two influences are not a choice,  companies need both simultaneously. Companies need a stable operational platform that protects and responds to the challenges of a increasingly aggressive increasingly sophisticated criminals; hackers are no longer teenagers in bedrooms with too much spare time; today are part of criminal organizations and rouge nation states.

Yet in the 15 years the term “using an ordinary web browser” has taken on a rather perverse form, the quest for global domination by desktop dominance ie the browser wars have been abandoned;  today its all about mobile devices (Android vs IOS; Samsung vs Apple).   We end of 2015 confronted with the fact that there is no such thing as ordinary device or ordinary browser, the market is more fragmented that it was in 2000.  IE, Chrome, Safari, Firefox, Opera etc in all their various versions in all their various supported platforms ( android, IOS, Mac, Windows) on all the 100s of possible devices in the marketplace;  a combinatoric matrix in the millions.

Abandon the dream of having SAP apps running securely and consistently on any device anywhere anytime; –  this was a marketing fantasy. Today’s reality;  is that ALL SAP shops large or small will need control, a manageable whitelist of supported browsers/versions on a equally clearly defined  set of devices. The effort in a supporting BYO devices glitch determinations frequently exceeds the cost of  simply buying a new known working whitelisted apple iPhone or Samsung device for that individual. Saying no to a VIP is I know is tough,  but IT support is expensive and must be focused on delivery greatest good to the most staff to deliver the biggest outcome to the business.

a) Chrome on Android

b) Android on Android

SAP has referenced devices, ie devices they will support, other devices wont be supported if you request these in a incident to support.

Mobile Browser Summary: At the time of writing ( 16/11/2015) every mobile device is good;   unless want support from SAP,  in which case you have a choice of 1 Samsung Galaxy S4 running Chrome, bad luck if you have those pesky iPhones.  Since I am very polite person;  I will let the words of John McEnroe respond to SAP 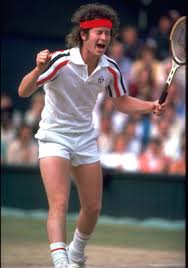 “You cannot be Serious!”

It is recommended you have an Intel i5 2.8Ghz CPU with 100MB free RAM per session, 10 sessions = 1GB .  Recommended is to have exclusion on virus checkers for commonly accessed javascripts.  Avoid Microsoft developer tool bar and Skype browser plugins. My recommendation is you take a close look at all browser plug-ins, unless you are using them disable them.

SAP supports Firefox but I havent yet seen it in pervasive use at any customer.

One of the key FireFox notes relating to Limitations for Unified Rendering is 1089062.

Like Firefox I have seen people using it within corporations but yet to see pervasive use.

Further “The release always applies to the current version of the Chrome release cycle (see googlechromereleases.blogspot.com). Therefore, as soon as Google publishes a new release of Google Chrome, SAP stops supporting the previous releases at the same time as Google.“…

Basically states the “current” release of Chrome shall be supported.

States ” Note: recently Chrome has been having difficulty with SSO even with the below solution (issues were reported starting in June 2015). If you already have implemented the below solution and SSO fails intermittently (maybe even consistently), refreshing or trying again will often solve the issue.

The intermittent issue is under investigation with development on SAP note 2208612 no configuration options in BI or Microsoft have been able to resolve to this point, see the note for work around.

So SAP is saying basically no support for chrome unless you have the current release.

Which states at the time of writing  “From January 12, 2016 only the most recent version of Internet Explorer available for the supported operating system will receive technical support and security updates (see IE blog http://blogs.msdn.com/b/ie/archive/2014/08/07/stay-up-to-date-with-internet-explorer.aspx). For Windows 7, 8.1 operating systems and server 2012 R2 this will be IE11. “

Then says ” SAP will also end supporting browser versions lower than IE11 for these operating systems on January 12, 2016.”

Read that again slowly: SAP end support of all IE lower than IE11 from Jan 2016! Is your company ready ? Fully deployed IE11, no residual 7,8, 9 and 10? Reading between the lines it means new SAP products and updates wont even be tested on anything other than the most recent IE11.  Older products will be supported best effort.

With IE you will still need to use 32 bit rendering:

” Please Note: This does not mean that IE with 32-bit rendering is not supported on Windows Operating System 64 bit (on the contrary, it is recommended).

“Edge Support is not planned for:
BSP

So with Microsoft Edge, SAP Business Server pages will fail (bad news if you are still running mySAP.com workplace 🙂 ) as will SAPGUI integrated with browser and SAPGUI HTML.  With Edge expect failures for SAP UI technologies with Active Component Framework with active plug in include Adobe forms and reader, Gantt charts, Microsoft office integrationl . See Notes 766191 and 1098009

A basic summary is SAP recommends you deploy mobile adapted apps on mobile devices otherwise you may experience rendering issues.  SAP goes on to say “ Customers should adapt their applications to match the correct form factor, application complexity, and UI technology in order to run correctly on a mobile device. This adaptation usually involves manually recreating the user interaction layer to suit the touch-mobile device characteristics.

When using AI (Application Integration) iViews, to enable session management and proper functionality, place these iViews in the Launcher, and configure them to open in a new window (Launch in New Window = Display in Separate Headerless Portal Window). Do not place such iViews in the Home pages. “

This note talks about portal support for mobile devices and desktop,  For  launching Fiori  recommended is Fiori Framework Page check out note 2065235

You would like to use Microsoft Edge in SAP Enterprise Portal.

The current status is that Microsoft Edge is supported in EP only in the Fiori Framework Page (FFP) runtime scenario.

SAP states ” Some personalization functionality, such as dragging and dropping tiles and groups, is not currently supported in SAP Fiori launchpad for devices running iOS8. A fix for this issue will be provided in one of the upcoming patches. ” So there is no support at the moment (19/11/2015) for iOS8 devices.

Understandably SAP cannot support all combination of devices on SAP existing and future technologies, and neither can your organization. Thus SAP has in 2015 focused support on a more selective and pragmatic group of browsers and mobile devices. IE version 11 will be the only IE supported from Jan 16 2016; this will mean new products will almost certainly not be backward tested on older releases. . Chrome and other browsers will also only be supported in its latest release. SAP as obviously rationalized support mobile device support to a few selected devices such as Samsung Galaxy S4, obviously this list is overdue for an update to include some of the newest and most popular devices such as iPhone 6s on iOS8.

In the 15 years since SAP first released its first (and clunkiest) portal, much has changed;  SAP can not be all things to all browsers for all devices; – neither can your organization.

Maybe in 15 years standards will be clear, your mobile computer will be a contact lens or integrated into your eye-ware, robust standardized and globally supported, we all hope so, but I wont bet my retirement on it 🙂 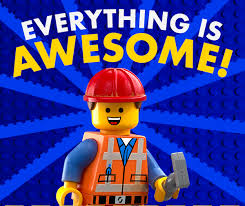 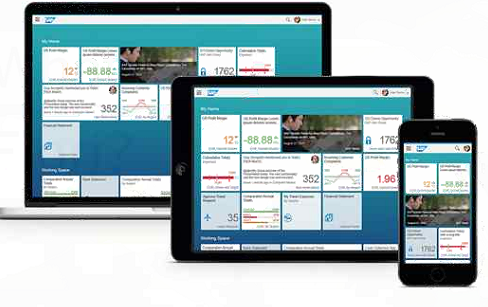 Stumbled upon this blog by accident and it seems fresh as a daisy in 2018! 🙂 Well written and I enjoyed a trip down the memory lane.