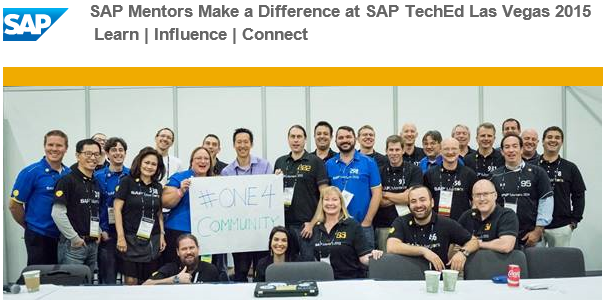 Described as “the best of the best” by Dennis Howlett of diginomica, the SAP Mentors and Mentor Alumni left a large footprint at SAP TechEd in Las Vegas by sharing their knowledge, providing feedback to keep SAP relevant, and engaging with conference attendees at every opportunity. Here are some highlights:

Let’s continue to make a difference at SAP TechEd Barcelona. See you there!

I'm publishing this note I sent out to SAP Mentors after SAP TechEd 2015 Las Vegas. (Thanks to Mentors who encouraged me to share this more publicly. 🙂 )

I hope you'll agree that SAP Mentors are making a big difference to our community on a daily basis, not just at events like SAP TechEd. This was a successful event in Las Vegas, and I hope to share some highlights of Mentors at SAP TechEd Barcelona shortly.