The world of soccer has long since opened up to the power of technological advances. TSG 1899 Hoffenheim, a German Bundesliga club,  has developed a reputation as a leading innovator. Buoyed by the popularity that the “Footbonaut” ‒ a training machine for sharpening ball-control and response skills ‒ enjoyed among its coaches and players, the SAP-sponsored club is now embracing a new digital revolution: the “Helix”. This cognitive training unit, developed by SAP, aims to reproduce the player perspective as realistically as possible. So far, it is only available as a prototype, but it is already blazing a trail for the future of the game and attracting a great deal of attention to the club.

Initial ideas about how cognitive training might look in the future took shape during a Design Thinking workshop held at the SAP AppHaus Heidelberg in collaboration with coaches from TSG 1899 Hoffenheim, the SAP Sport Sponsoring Team, and an implementation partner ‒ under the leadership of Michael Kögel from the SAP Design & Co-Innovation Center (DCC). “Design Thinking was a completely new approach for us. But we adopted it straight away and applied it at further brainstorming sessions,” says Jan Mayer, a sport psychology advisor at TSG Hoffenheim. Close links between the DCC and other departments at SAP led to a cooperation project with the SAP Co-Innovation Lab, whose Helix platform for virtual meetings ‒ with its immersive 270-degree screen ‒ seemed the ideal basis for building an initial prototype. “We had a whole truckload of ideas from the very beginning. But it was vital to focus on getting the foundations right first. We’ll add improvements and enhancements bit by bit,” explains Manfred J. Pauli, a director at SAP’s Co-Innovation Lab.

Using the Helix, developers transferred an existing iPad app for training players’ visual perception skills into a realistic environment that also enables them to hone their peripheral vision.

In what looks like an oversized PC soccer game, animated players from two teams appear in front of a human player on a 180-degree projection screen depicting a stadium. After a short stationary phase, the animated figures begin moving around the virtual pitch in random directions. When they next stop, the human player in the Helix must identify the figures (up to four, depending on the degree of difficulty) that flashed briefly before they started moving. To increase the stress factor and create near-realistic conditions, typical stadium sounds can be added in and played at different volume levels. The Helix, which is located at TSG 1899 Hoffenheim’s training center in Zuzenhausen, southwestern Germany, was initially tested by sports students and players from the club’s junior squad. In the meantime, expert representatives from the worlds of sports and science agree: this invention will redefine cognitive training for soccer players and bring major advances in their powers of both concentration and peripheral vision. “We’ve discovered that the Helix collectively trains a player’s peripheral vision and multiple-object tracking skills,” says sport psychologist Jan Mayer.

What’s more, the players at TSG 1899 Hoffenheim are intrigued by this style of training. “I’m always curious to find out what the technology is capable of. The 180-degree screen, in particular, reproduces the real game situation much more closely than the app,” confirms Jesse Weippert, who is a member of Hoffenheim’s under-23 team. Before the Helix was installed, the players honed their cognitive skills using an iPad app, but the small screen was a constant source of irritation.

Jan Mayer is thrilled about the positive response that the Helix has received so far. “We’re delighted that the Helix is proving to be such a success,” he says. Even an expert in multiple-object tracking from the University of Tübingen in southern Germany has expressed enthusiasm for the training unit, describing it as a “technological first”. Following a scientifically substantiated training concept is essential for TSG 1899 Hoffenheim. “It’s very important for us to have sound scientific evidence to confirm the Helix’s effectiveness as a training device,” says Mayer. “It gives us a foundation to work on and encourages acceptance.” 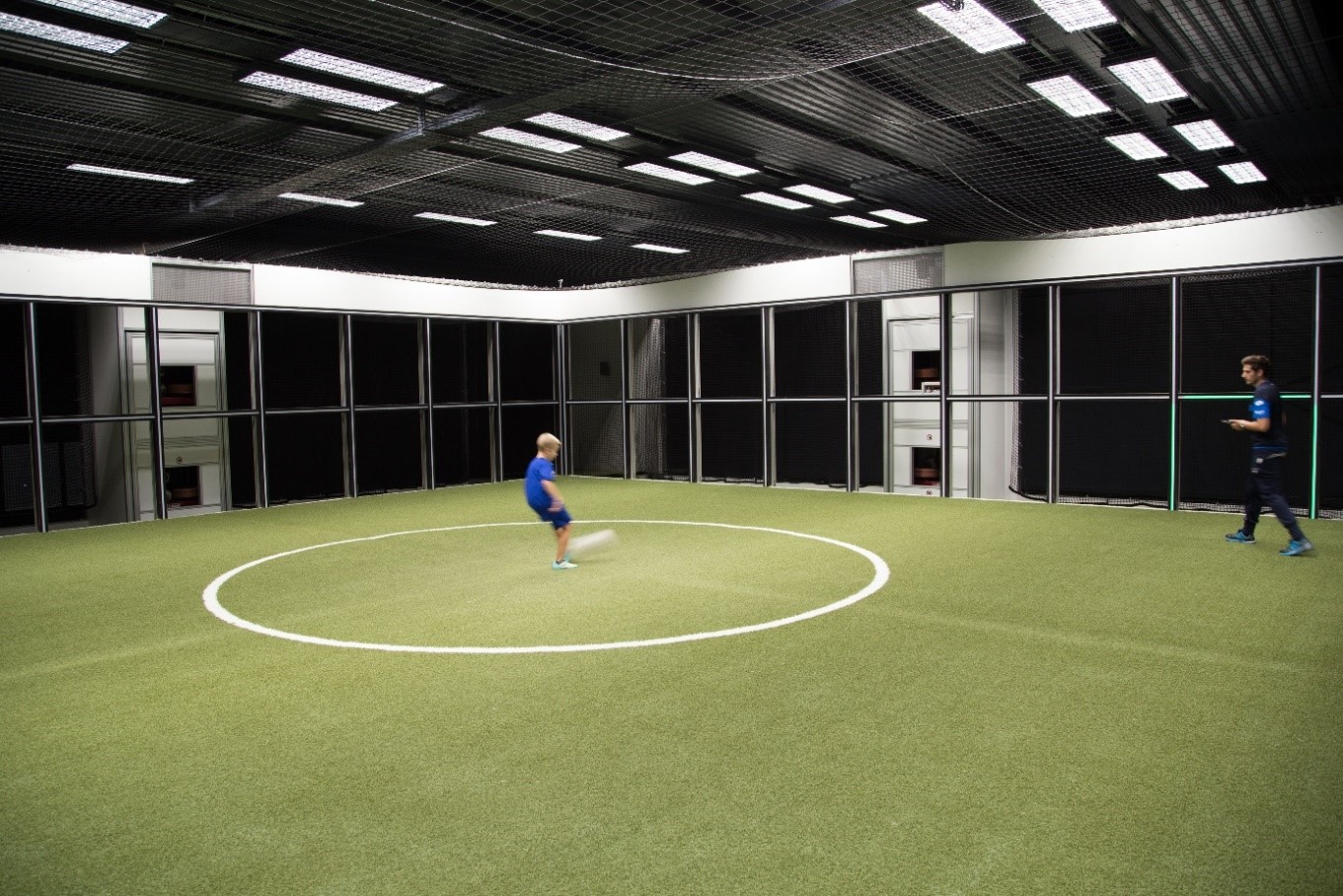 Plans are already afoot to make the Helix even more realistic in the future. These include enabling speech recognition and gesture control. “Of course, a 360-degree version would be highly desirable. But, for now, we’re gaining experience with the current set-up and keeping an open mind about possible future developments,” explains Manfred J. Pauli, who has already been granted several patents for the technology. Nevertheless, the Helix is already making a huge contribution to improving players’ field vision and thus accelerating their responses to complex match situations. This technology could potentially be of interest in other professions, too. For instance, in the more distant future, the Helix could perhaps add value in security and health management, where response speeds and vision play key roles.

At any rate, the DCC is proud to have been the nurturing ground for this trailblazing, innovative development and is looking forward to seeing how TSG 1899 Hoffenheim and the soccer community as a whole will benefit from it.