How Fear of Failure Paralyzes Innovation

Thanks to disruptive technologies – and the notion that 40% of today’s Fortune 500 won’t be around in a decade – companies are scrambling to make innovation happen. So how do you get started? Is there a proven recipe for creating a successful culture of innovation? How can organizations move beyond the fear of failure that paralyzes innovation? 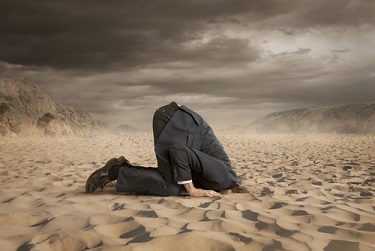 Bonnie D. Graham, host of Coffee Break with Game Changers Radio, discussed these innovation pain points with a panel of experts and students during a recent broadcast, “How Do We Live with Innovation?”

“Number one, you need a passionate team committed to working together to reach common goals,” said Graham. “You also need an environment where your team feels safe about trying new ideas; that means you take away the fear of failure.”

Strong leadership can also spark a culture of innovation but Graham reminded the audience that there’s no replacement for hard work, citing a famous quote from Thomas Edison, “Genius is 1% inspiration and 99% perspiration,” said Graham. “It may take a lot of work but it’s worth the effort because your company needs to have a culture of innovation.”

Fear of failure and thinking outside the box

As head of Service Innovation for Global Services at SAP, Michel Sérié knows a thing or two about managing organizations and believes innovation involves much more than simply thinking outside the box.

“I need people that are innovators or have sensitivity for other people that are bringing up good ideas,” said Sérié. “You should be able to cope with change, with uncertainty and failure. If you’re not ready to fail then unless you’re very lucky you’re never going to succeed.”

“Never work on tasks, projects and ideas with the fear of failure. This can affect our behavior and decisions. I think fearing failure stifles creativity and progress. If you’re not failing you’re not going to win the race.”

“Obviously you need people because people are at the center of everything you want to do. It’s not like the process is the backbone. People are the backbone of innovation.”

And while Sérié believes any culture can be innovative, it’s not something you can force; it must come naturally with some governance to help steer the process.

“If you want innovation to be successful you also need to put governance in place, otherwise it is never going to find fertile ground.”

Martin Daum a student in the Global Service Innovation Team at SAP believes tapping into that fertile innovation ground involves bringing out the best of different personalities and cultures.

“When cultures come together to one table you will match the cultures together and a new culture may come out where all the benefits of each culture come out,” said Daum.

Özge Ölmez is also a student working in SAP’s Service Innovation Design Thinking Centre of Excellence and believes the secret to innovation success lies in finding a creative starting point to build from.

“During that process you can of course make mistakes, you can fail, you can do something wrong,” said Ölmez. “The reason people don’t like to admit their mistakes is they build a kind of spiritual bond to the creation, which is the process of innovating. Because of this spiritual bond people don’t like to admit their mistakes. They think they have achieved the best idea in the world but it’s not reality.”

To learn more about the reality of innovation, listen to this entire SAP Radio broadcast here.

Why Do So Many Start-ups Fail?