What does comedy in South Africa have to do with the fall of the Berlin wall?

This week marks the 26th anniversary of the fall of the Berlin Wall which reminded me of another struggle for freedom and human rights at the other side of the world: the fight against Apartheid in South Africa. The city of Berlin donated a piece of the Berlin wall to the city of Cape Town which now reminds tourists and locals of the peaceful fight for freedom, and human rights in both countries. 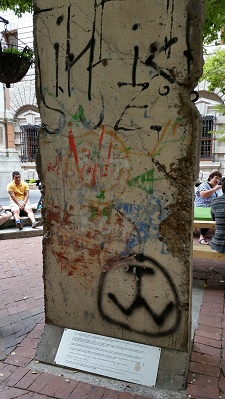 During my volunteer work for a South African NGO magazine, I had the chance to speak with Cape Town comedians who shared their view on the current situation in South Africa, how they use humor against racism, and talked about their experience during Apartheid.

The comedy scene in South Africa is a great example of how humor played a decisive role in speaking out against the Apartheid system. “Mandela showed the country forgiveness. And when the man with the sword gives it away and forgives, that has much more power”, says Kurt Schoonrad, South African comedian and owner of the Cape Town Comedy Club. “Comedy celebrates diversity, but at the same time points out the similarities that we all share.” Kurt explains that part of the Apartheid system was to isolate the cultures, thus raising fear of each other.

Comedians like the author, actor, and activist Pieter-Dirk Uys consistently challenged the system, and have made South Africans laugh, think, and learn for more than four decades. With his alter ego and ‘most famous white woman in South Africa,’ Evita Bezuidenhout (see picture below with Nelson Mandela), Uys found a way to satirize the system, and get around government censorship. “I learned during the apartheid years, that the truth is funnier. Humor is a great weapon of mass distraction.”

One of the few successful female comedians in South Africa is Mel Jones, a regular guest at the Comedy Club. Having grown up in a difficult environment like Mitchells Plain, Mel agrees that humor has helped her find strength and identity. That is why she agrees that it is important to help women in the Black community to find their strength. “The country has gone through enough change and now it is time to give something back. Empowering people to use their strengths through laughter is rewarding for me,” she says.

Is it ok to Joke About Race?

When asked about common themes in South African comedy, the comedians agree that the history of the country is a common theme. “You still have the race-related issues that we tackle in comedy, but in South Africa we discuss these issues openly. Because of our history we have been desensitized,” says Kurt.

Mel explains: “I did a show once with Americans in the audience. We had a very mixed lineup, and some did race-related jokes about what is was like growing up in the culture. The Americans were shocked that we could talk about aparteid in a seemingly insensitive way. But for us it is triumph in the face of adversity. It is us adapting to change. I think what we went through in South Africa gives us alomost like a ‘Get out of jail free’ card.”

Mel and Kurt both agree that is is acceptable to make race-related jokes, but only if it relates to one’s own experiences. “I can’t imagine what it felt like for a white or black person growing up during apartheid, or how they feel now, but I can draw upon my own experiences, like my relationship with a white guy, and pick on the cultural differences,” says Mel. 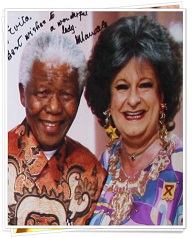 As part of my job as an editor for a South African NGO magazine, I also had the chance to do a writing class in a girls’ prison (a center that hosts female offenders aged between 13 and 18) providing essential writing skills to the girls in the hopes of producing an in-house newsletter.

In Africa, everybody seems to be a great storyteller. And so it was only logical to help those struggling kids by letting them tell their story. Our team mentored the girls to help them write down their feelings, find thir voice, use their creativity. More about the projects: www.facebook.com/capechameleon; @capechameleon

Tips How to Tell a Good Story 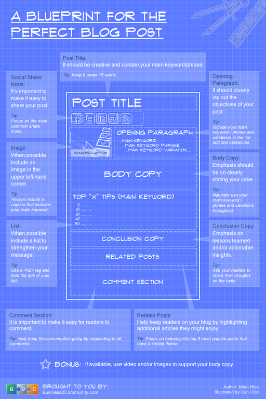 Here are some tips what to consider when starting to write from our blogging expert Tim Clark, whether for business or a private blog:

For tips how to structure a post see Tim’s post with a blueprint for the perfect blog:

An example of how humor and business acumen work well together can be found in Richard Howell’s blog post, “Santa’s Supply Chain: Best in the World?” Notice how Richard cleverly links a popular holiday to supply chain best practices: www.forbes.com/sites/SAP//2011/11/28/santas-supply-chain-best-in-the-world

If you want to get a feeling for South Africa's comedy scene, watch Trevor Noah. He is South Africa's current big comedy export, and new host on the US Comedy Central network News TV show "The Daily Show".

Trevor Noah on being mixed race in South Africa: www.youtube.com/watch?v=YqciCFLxfEE