5 Reasons why Chinese Aircraft Manufacturer will become a Global Contender 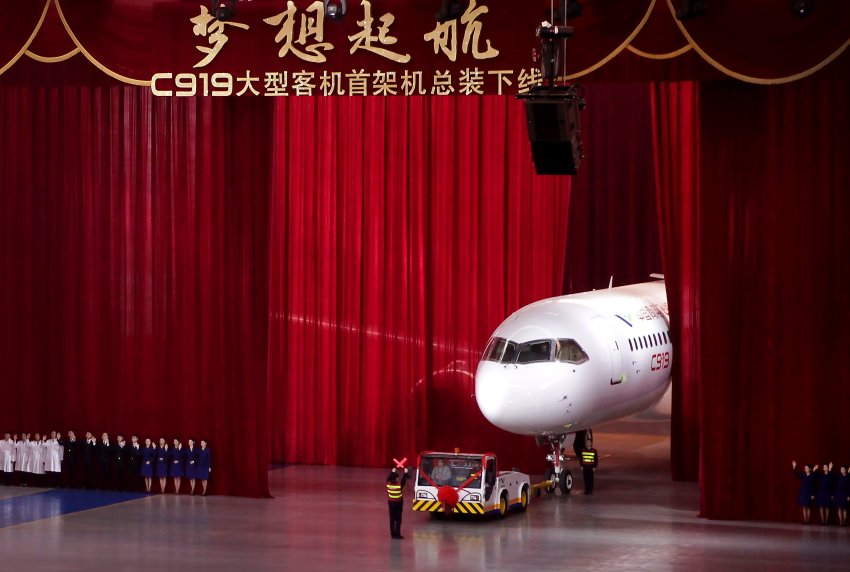 On the 2nd of November 2015 COMAC presented ceremonially their new shiny jet C919 in Shanghai after seven years of development. A plane entirely developed in the People’s Republic of China. Obviously, the C919 has all the characteristics of a modern passenger jet, from a turbofan with high bypass ratio, to winglets in order to reduce induced drag. Maiden flight for the single-aisle aircraft is scheduled for 2016. Nevertheless, there is still a long way to go until the prognosticated delivery in 2018. Aviation experts are not yet in agreement whether the C919 is a cheap copy made in China or if COMAC intend to be a serious competitor in medium haul aircraft. My aim is to give you an understanding of what lies behind the red velvet curtain by giving you five reasons, why COMAC will achieve the breakthrough, become a global contender and in doing so end duopoly of Airbus and Boeing.

The much-delayed passenger jet is the Chinese answer to Boeing’s 737 and Airbus’ A320, the current world market leaders in narrow body aircraft. According to Boeing’s forecast, the aircraft market will be dominated by the single-aisle sector, which requires 25,680 new aircraft, or impressive 70% of the total demand, promoted by large orders from low cost carriers. Not surprisingly, the Commercial Aviation Corporation of China (COMAC), founded in 2008, aims at positioning the C919 on this rapidly growing market segment.

China’s air travel market booms. Since China is already the world’s second largest air travel market, they will demand more than 6,300 new planes over the next two decades. Even in the case, that COMAC’s airplanes will not be certified globally, they will be able to serve a giant market in Asia as well.

Indeed COMAC seems to take the gloves off by stating unbelievable 517 orders for 21 customers. They are massively supported by the Chinese government, whereby Chinese airlines face political pressure to buy domestic products, regardless of the price-performance ratio. And additionally high investments will never be an issue for this government-owned airplane manufacturer, as China has strived for their own commercial passenger jet since the 70s.

Government supported = orders and money will never run out

Some aviation enthusiasts strongly contradict the state media of China, proclaiming that the C919 is Chinese intellectual property. According to published information many key components of the C919 are made overseas, illustrated in the following figure. With suppliers like CFM International, Honeywell and Rockwell Collins, the C919 relies heavily on renowned Western technology, strengthening the quality standards and mainly winning confidence of foreign airlines.

How Chinese is China’s new jet? Suppliers of some key components of the C919

In order to establish a commercial aircraft business, building a highly efficient airplane is just the basis. An airplane requires a significant support network that is capable to ensure next-day delivery. COMAC needs to create a competitive customer support function. On this account Bombardier and COMAC signed an agreement to cooperate in 2012. Bombardier helps to provide a ready-made global customer support, much-needed engineering and supply chain capability immediately. Receiving the FAA certification, as one of the key elements for COMAC to break the duopoly of Airbus and Boeing globally, the cooperation with Bombardier could play a decisive role. Moreover Ryanair, operating a Boeing 737 fleet, is extremely interested in the development of another competitive single-aisle aircraft, blasting the supremacy of Airbus and Boeing. Hence Ryanair and COMAC signed a design agreement to be development partners, gaining a foothold in the low cost-airline industry outside of China.

COMAC has created many prerequisites in the last few years, becoming a global player in the aerospace industry, now it is time to focus on a solid marketing, ensuring a service infrastructure, providing maintenance and prompt spare parts supply. Furthermore COMAC has to be careful, that the certification and the final start of series production do not take too much time, regarding the fact that Airbus’ and Boeing’s cutting-edge models, the A320neo and 737 Max, will come onto the market and relegate the C919 to a subordinate position in the shade. However, as can be read on COMAC’s homepage, they are anxious to “leverage on the whole nation’s strengths and wisdom, and bring into full play the political superiority of the socialist system”. Sure! With great certainty, they will mobilize all available means to be successful and complicate life for Airbus and Boeing.

Finally, you should find out the impressive vision and idea of COMAC in the following video.

Everything in manufacturing needs to be digital

Fasten your seatbelts! Next generation of finance transformation is on the way

Predictability in manufacturing leads to profitability

Nice article, thanks for sharing

It's nice to hear, that you like the blog. 🙂