What does User Feedback really mean and how do we make sure our users are heard?

You may have heard the term “User Centric IT Organization”. I am pleased to tell you about how we at Business Innovation and Information Technology (BI&IT) Enterprise Mobility team headed by Martin Lang actually not only embrace this but also bring it into effect in our efforts to make the work lives of over 75,000 colleagues at SAP simpler.

User Feedback ( good and bad ) is of paramount importance if an organization wants to be really user centric or wants to come even close. What if you could instantly hear what the users have to say when you are thousands of miles away from them? What if you could receive all the information that your team needs to analyze the feedback including screenshots and logs? Sounds like a bit of a challenge, isn’t it?

At BI & IT Enterprise Mobility, we have made this possible by implementing what we call as the feedback shake. How it works is as follows:

Consider a scenario where you are using a mobile app, and you quickly have an idea about a new feature that might help you use the app in a better way. In a typical scenario, you would have to take a screenshot, open your email, search for the email address or DL that the feedback should go to ( in some cases this info is not readily available ). Ultimately, in most cases, you do not send feedback because it is just so much effort. Here comes feedback shake to your rescue. With the feedback shake, you can quickly shake your phone and tap on a button to send feedback. The email client will open on your phone with pre-attached screenshots ( the screen you were on when you shook your phone ), logs and some metadata (  app version, OS version ). All you have to do is type your feedback and tap send.

This is a much easier and quicker approach for the sender to provide feedback instantly with fewer steps, and also for the receiver to get feedback with all the required information needed to analyze the feedback. The cherry on the cake is that the framework is so easy to integrate with any app making the life of developers a lot easier and they can focus more on the functionality. Here are some screenshots that show how the framework functions. 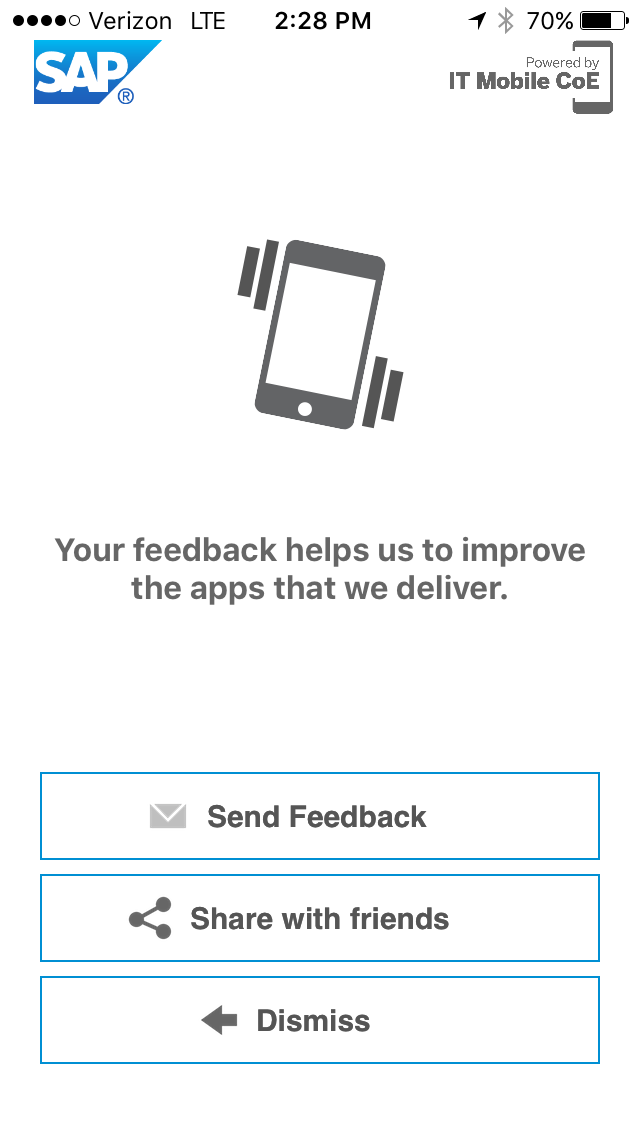 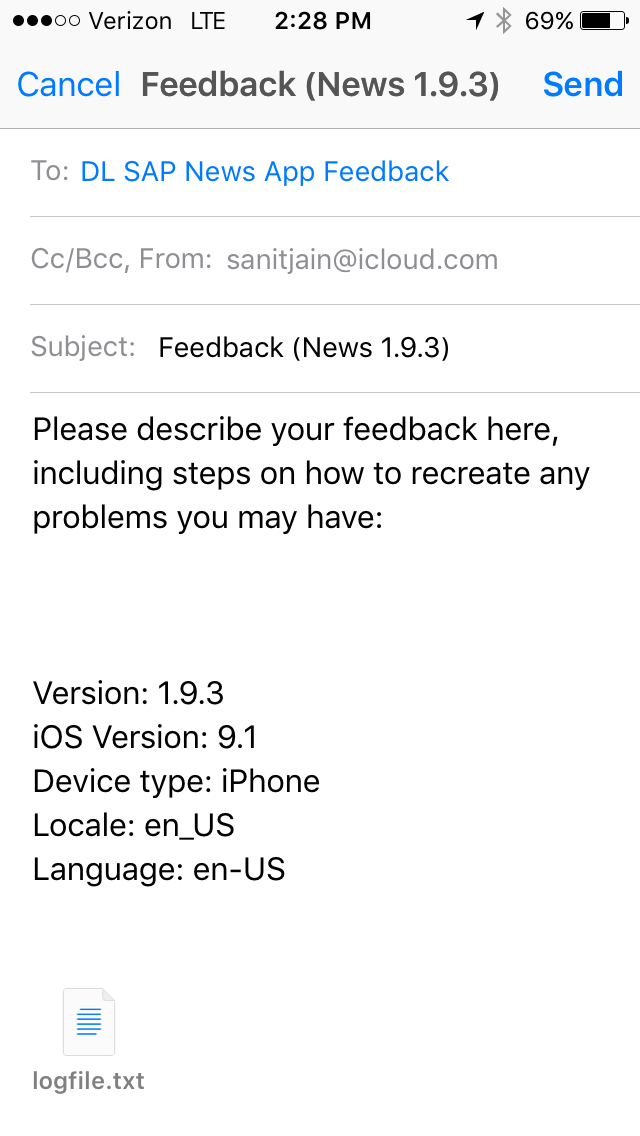 Every organization who wishes to be User Centric needs to know how it’s users are interacting with their software.

Especially for us at Enterprise Mobility, we wanted to know the following:

To answer all these questions plus many more, the Mobile Usage Framework was developed completely in-house. The framework shows a real time world map of internal apps being used by SAP colleagues worldwide. The top half indicates the country where the app was used and the bottom half shows the name of the app that was used. There is also color coding to distinguish between the platforms these apps were used on. All in real time! 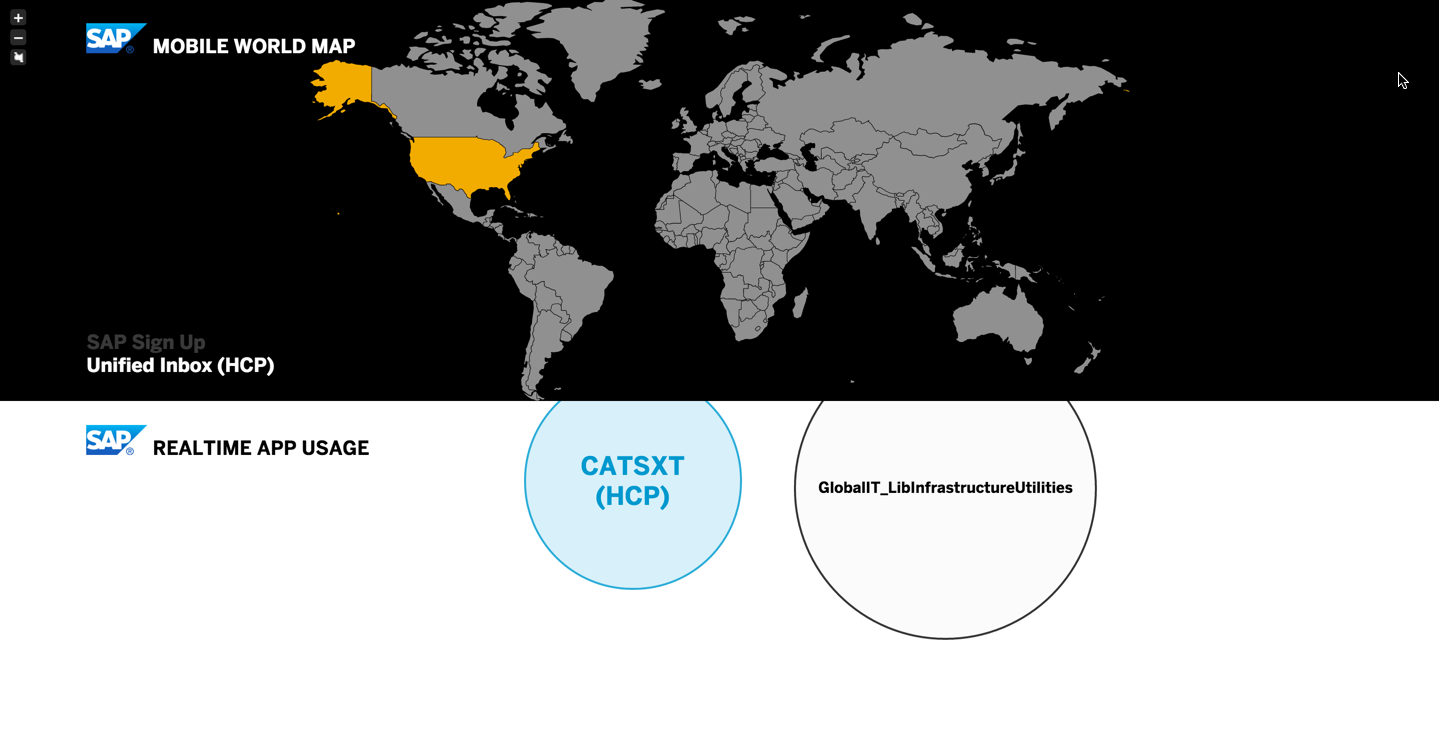 Not only this, the framework provides reports such as unique devices, total hits, usage by app versions, regional usage plus many more metrics. My favorite metric is actually user events which tells me the features that the users are using the most ( or the least ). This gives me insight into the usage patterns and what the users like the most, and which are the areas that we need to focus on to improve the user experience.

The worst thing that can happen to an app is that it crashes when the user is interacting with it. Of course, we try to minimize crashes as much as possible by following coding best practices but sometimes it just happens. So how do we make sure that we know that the crash has occurred, when it has occurred and during which interaction it has occurred? All these questions led us to create yet another useful framework called the App Crash Log Framework built on the SAP HANA Cloud Platform.

The App Crash Log framework is easily integrated with any app so it is super easy for developers to incorporate. Once an app crashes, the next time the user launches the same app again, a popup appears asking the user to send a crash report. Once the report is sent from the app, it gets stored on the Crash Log server. The information that the server receives from the client ( app ) also includes log files for developers to symbolicate and detect the memory leaks that caused the crash.

These frameworks enable us to be close to our users, and make the right choices when it comes to providing a great User Experience. I was happy ( and fortunate ) to showcase these frameworks at SAP TechEd Las Vegas which is SAP’s premiere technology education event in North America. It was very exciting and satisfying to talk to our Customers and Partners about some really cool and innovative stuff that our team members at BI&IT Enterprise Mobility have worked so hard to bring to reality.

If you will be attending SAP TechEd Barcelona, please join Sanit’s colleague Simon Hofmann on Wednesday, November 11th for Networking Session EXP27453 Develop SAP Fiori Apps and Back-End Mobile Applications with SAP HANA Cloud Platform, from 11:30 to 12:00 in Lounge 2, Showfloor. There you can get more insight into what we think about User Centricity, what it took to develop frameworks like the above and the latest and greatest in SAPUI5 and SAP HANA Cloud Platform.