As part of that effort SAP sent several colleagues to Cloud Foundry Dojos in the US to intensively train them. Those Dojos run for 6 weeks and at the end, if the Cloud Foundry team feels you have now the right skill set, provides the participant of such a Dojo with the committer status for Cloud Foundry projects.

Some of those SAP colleagues will now lead the BOSH OpenStack Cloud Provider Interface (CPI) project which was announced at the Cloud Foundry Summit in Berlin on November 2nd, 2015. (see also tweet by Matthias Steiner) 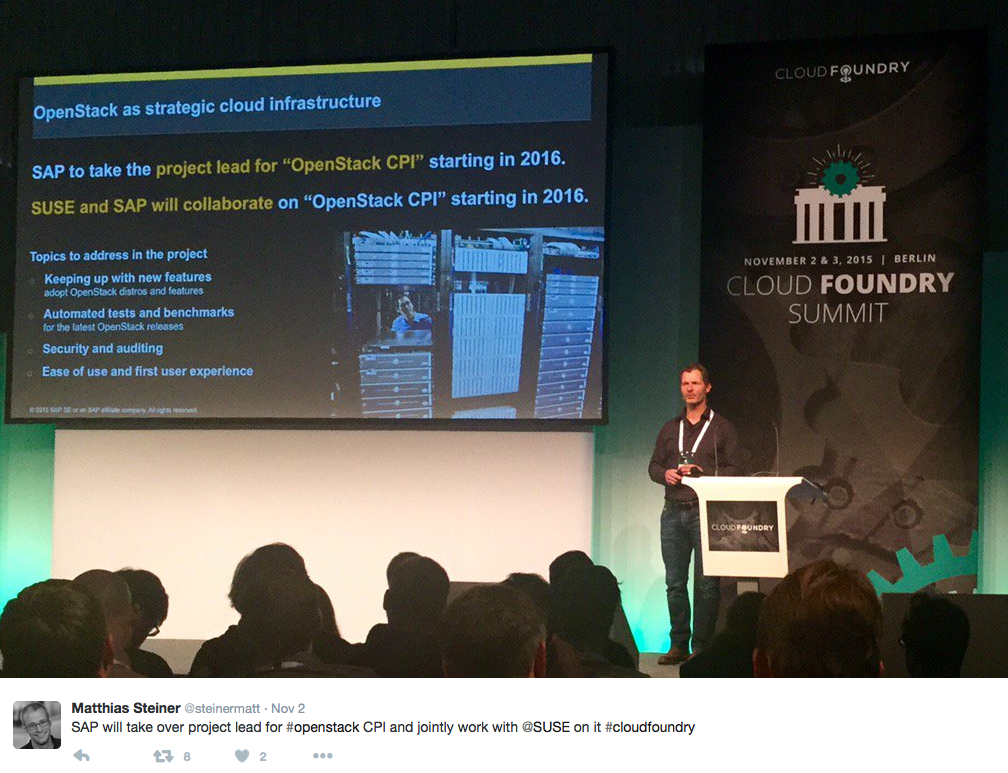 According to the BOSH online docs page, “BOSH is a project that unifies release engineering, deployment, and lifecycle management of small and large-scale cloud software. BOSH can provision and deploy software over hundreds of VMs. It also performs monitoring, failure recovery, and software updates with zero-to-minimal downtime.

While BOSH was developed to deploy Cloud Foundry PaaS, it can also be used to deploy almost any other software (Hadoop, for instance). BOSH is particularly well-suited for large distributed systems. In addition BOSH supports multiple Infrastructure as a Service (IaaS) providers like VMware vSphere, vCloud Director, Amazon Web Services EC2, and OpenStack. There is a Cloud Provider Interface (CPI) that enables users to extend BOSH to support additional IaaS providers such as Google Compute Engine and Apache CloudStack.”

So why is SAP leading this project now?

Setting up a PaaS and making it work with the underlying IaaS layer is a very demanding and complex task. Doing it manually is difficult and error-prone. This is even more true if you think of providing your customers with additional deployment models for your PaaS solution as I’ve described also in my related blog post focusing on the SAP HANA Cloud Platform. BOSH is exactly the right tool for that purpose!

The BOSH OpenStack CPI provides an IaaS abstraction layer for OpenStack. Meaning that it encapsulates all the OpenStack-specific functionality in a standardized way. With that it doesn’t make a difference for BOSH whether you have an IaaS layer VM vSphere, OpenStack or Amazon Web Services. The corresponding CPIs take care of all the necessary specifics, e.g. how to provide VMs, attach disks and configure the network.

Within this project SAP will also propose a set of automated tests for the specific OpenStack installation and configuration comparable to the OpenStack DefCore effort so that the underlying IaaS layer can be better audited regardin the expected functionality to deploy Cloud Foundry with BOSH.

If you are interested in the BOSH OpenStack CPI project you can visit its landing page.

All of this is another step from SAP to better address demands of customers and partners around an open, modern and flexible PaaS offering that the SAP HANA Cloud Plaform provides. Stay tuned for more new around our efforts around Cloud Foundry and OpenStack for the SAP HANA Cloud Platform.

awesome, Rui. Thanks for the update

You forgot one very important aspect of the BOSH OpenStack CPI project which was recently announced: the participation of SUSE in this effort. The associated press release also included a quote from Björn.

Thanks for your feedback Richard. I wanted to focus on SAP's part in this project.

As you know HCP currently runs on SUSE and we are happy to continue our collaboration as HCP evolves!

Is this likely to lead to a lifecycle management tool for HCP apps? Or is this more at the underlying provision of HCP services?

Still waiting for Jenkins on HCP as a Service 😉