SAP UI Roadmap – What happened in the past 6 months?

With TechEd Barcelona coming up next week I was preparing my questions and things I want to find out while I’m there. Following my previous blogpost on the subject (New SAP UI Roadmap – What’s changed since 9 months ago?) and the positive comments I got on it I thought I’d write another one with my findings. I compared the UI Roadmap of April 2015 with the most recent one (http://www.sdn.sap.com/irj/scn/go/portal/prtroot/docs/library/uuid/c0e5d250-3e9a-3010-97a0-a0c7f48b5bd8?QuickLink=index&…). 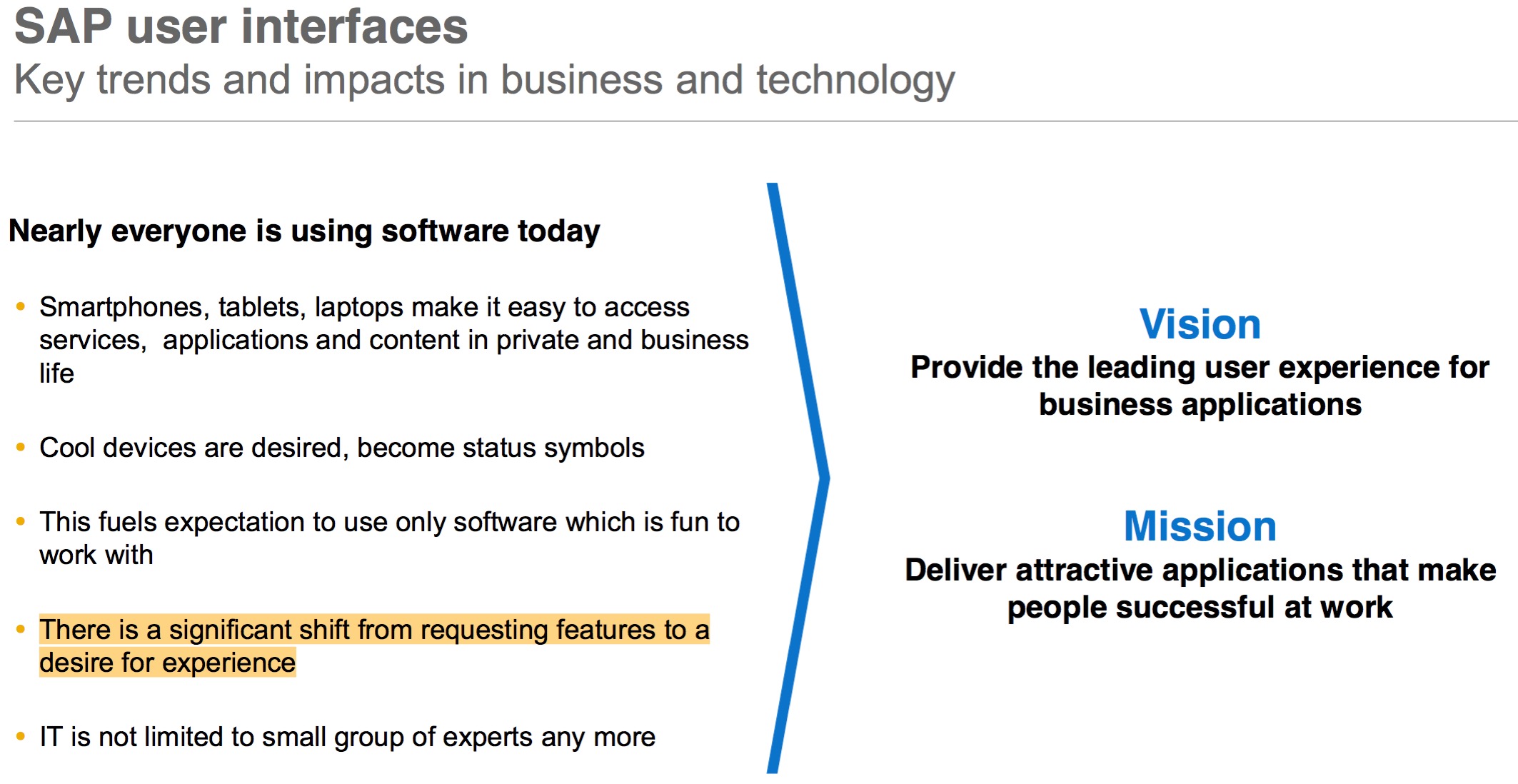 There’s been a little shuffle of the trends on the left side and one addition (highlighted). I do think it’s an important addition and I recognise it to some degree. People see the power of simplicity in Fiori apps and want that for their processes too. After implementation of the basic (and indeed simple) Fiori app I too often am requested to build a list of features into an app that make the app more and more complex. Before you know it you’ll be building a complete transaction again and that’s something you should not want. If you’re building a Fiori app, always keep in mind the Fiori principles (simple, coherent, responsive, role-based and…I always forget one…ah yes: delightful). Especially the simple and (thus) delightful often get overlooked. If you need to build a transactional app, consider one of the other key UI technologies, such as WDA/FPM.

By far SAP’s hottest UI technology these days. You can tell from the many shifts of items in the columns and the continuous adding of new items. What I think is really great is that the transactional enablement of UI5 is shifted from Future Direction to Today. A lot of steps have been made in that area and I expect to get more details at TechEd. Something to watch is the use of Smart Templates. This will help to make the creation of new Fiori apps a lot easier. Much needed of course considering that S/4HANA will be completely Fiori. You can imagine the need to convert all the current screens into simple Fiori apps. it’s good to see the Demo Kit and documentation are getting improvements as well. Layered configuration / personalization is also very welcome. It will give developers the abilities to provide (key) users with options to optimize their app to their liking like we know from WDA/FPM (I imagine).

Future Direction seems stable but the 3 remaining items in there are very generic. On the next slide you see some elaborations on the subjects. For instance for new controls: “Tree, Tree Table, Analytical Chart and many other control improvements”. I know that Tree Table was a customer requested feature and I’m curious to see how they will make it happen and if it will work for mobile.

On the Description slide in the latest roadmap a couple of lines were removed. E.g. from the Key capabilities list: “Embraces “open source” framework(s)”. It makes you wonder whether SAP decided that they’re not embracing them anymore. My educated guess is that they haven’t but just thought it’s not really a key capability of the Web IDE. From the Benefits list we see that the line “Enables business experts and designers* via highly efficient tools” is removed. With the beta of Build (www.build.me) released you would think that the (planned) prototyping capabilities of Web IDE will be shifted to Build (in that case I’d remove “prototyping” from the tagline). Why SAP decided to release another tool instead of integrating it with with the Web IDE puzzles me and I’d like some clarification on that decision.

In the previous roadmap a slide was dedicated to the building of new apps and one to extending existing apps. These slides are gone in the newest roadmap (presumably because they were not adding much value on top of the Description slide) and new slide about Web IDE Plugins was added.

The fact that the Web IDE is a modular platform (much more than merely a tool) is one of its biggest benefits IMHO. You can even add your own plugins allowing you to add your own features to the Web IDE. The graphical viewer of the OData Model Editor was a much requested feature and I’m happy that they’ve added it. Next step hopefully is to the ability to edit the model in the graphical view.

Many think that SAP UI5 will replace Web Dynpro ABAP eventually. I’m still not sure whether this will happen or not but based on the UI Roadmap I see no pointers in that direction. For instance the “Tighter integration of SAPUI5” was and is still in the Future Direction.

The Future Direction for FPM/WDA has not changed but some of the planned innovations have been realised today such as the integration with SAP Fiori and the implementation of a (first version) of Screen Personas for WDA/FPM. Keep in mind that there are still WDA/FPM applications being used in e.g. Simple Finance (and I’m sure at S/4HANA as well). At first glance (which is a Fiori launchpad tile) you might think it is all Fiori/UI5 but in fact a lot of applications are still based on WDA/FPM. Having a tighter integration (such as intent based navigation) is in that case of much value, allowing contextual navigation from one object to another without limitations, regardless of the UI technology. I said it before and I’ll say it again: Web Dynpro ABAP is going strong and it is here to stay.

Dear to my heart, although I haven’t touched it in quite some time now. I see only 2 planned innovations realised (Open links in new tab/window & Quick navigation between search criteria). Furthermore I guess they wanted to throw me off by shuffling and grouping some texts but you don’t fool me SAP! 😉 Honestly I don’t see many things realised and that makes me wonder about the amount of effort to be invested in on-premise SAP CRM. Especially with the addition of hybris to the cloud suite of SAP it makes you wonder whether there will ever be a CRM 7.04 or 7.1. Looking forward to discussing this with my peers at TechEd (especially in Expert Networking Session EXP27289 (SAPCRM meetup by Gregor Wolf)).

For the UI Theme Designer one benefit was added: Apply corporate identity. Self-explanatory I’d say. No doubt a much requested feature.

As for the roadmap:

The Integration with Web IDE has been realised and is available as a shortcut from the WebIDE Home Page. There are a couple of new features in the Today column. On the other hand I see no features moved from Planned Innovations to Today. In fact one of the features (Integration with Git persistency for HANA Cloud Portal) is pushed back to the Future Direction. Perhaps a shift in priorities due to customer feedback.

The purpose of this tool is clear: improve productivity through personalization of ERP screens. A lot of work went into realizing the integration with other SAP UX Solutions (much like you see happening with other UI technologies (e.g. WDA)) and I think that is a good sign. As long as companies are still using the ‘old’ ERP screens, SAP Screen Personas is a valuable addition to your toolset. Something to watch is the future planned Mobile rendering. That means ‘old’ ERP screens will be somehow be mobilized. That could mean for instance reducing (a lot of) fields on VA01 and then be able to create a sales order on your iPhone. Looking forward to seeing how this would work out. Another very valueable planned innovation IMHO is the Usage analytics. This is of direct benefit to UX researchers/designers saving them a lot of time interviewing key users as they can (hopefully) directly see the most used features on a screen, allowing them to better design new screens.

One new browser will supported as from SAPUI5 version 1.32 onwards: Microsoft Edge.

One of the last products to have NetWeaver in its name (I feel another name-change coming up!). Actually a lot of work was done in the past 9 months. Support for various platforms was realised as well as integration with Screen Personas 3.0. Seems all of the currently planned efforts are put into enabling NWBC for SAP Fiori UX which sounds logical. Not sure I’m reading this right, but “SAP Fiori with SAP GUI native experience” doesn’t sound like something to look forward to 😕

New compared to the previous roadmaps is the addition of the roadmap slides for the Enterprise Portal (EP) and SAP HANA Cloud Portal. As such I cannot determine a delta but the trend you see in other areas is happening here too: integration with the Fiori launchpad and the Web IDE.

There’s no delta here apart from the fixing of the description. But I think it is still an important topic because of the many entry points you can now choose from. What the user will see is the Fiori launchpad. How this is implemented (in a browser, NWBC, EP, etc.) is up to the desire of the customer. In my opinion there are (still) a lot of flavors to choose from and you’d have to be an expert to give an advice about which one you should choose. I had hoped for a more concrete path towards the ‘portal of the future’ by now. Right now it seems everything will remain as it is (apart from that it will all look like Fiori) and I think that’s not very good. Ideally I’d like to see one product (e.g. SAP Portal) with different deployment options (e.g. Cloud, on-Prem full & on-Prem light) much like was done with the Sybase Unwired Platform, Sybase 365 and Syclo Agentry into SMP. Take the best features of each product, bring them to the other products and simplify the way you offer it to customers.

In any case this is at least the face of the ‘portal of the future’. Lots of work is done in this area and I hope to see a lot of it next week. From experience I can say that the simplified setup, config and admin processes will be welcomed with open arms by a lot of customers. Also the Push notifications will come in quite handy. Looking forward to learn how this will be implemented and what is required (perhaps SMP, ABAP Push Channels?). I can imagine that the Enhanced launchpad user experience with SAP Fiori UX 2.0 concepts will be sped up because from what I’ve heard people are extatic about Fiori 2.0.

I’m not going into the Specialized UI Technologies (Visual Business/Enterprise, Adobe IF & WDJ) as very little has changed in these areas (yes, WDJ is still dead 😉 ). The other topics at the end (SAP Fiori, SMP & Gateway) have their own roadmaps. Perhaps food for another blog!

Thank you for reading this blog post so far. I you have read it, please approach me at TechEd next week and tell me what you thought of it. If you haven’t read it, approach me anyway 🙂 Don’t forget to take a picture and enter the Catch a Mentor and Know a Mentor Missions