SAP CodeJam Stuttgart on IoT with HANA/HCP: getting hands-on on a buzzword

The fifth SAP CodeJam hosted by bridgingIT took place on October 30th in Stuttgart. This time our topic was Internet of Things. So all participants had the chance to get their hands on the current buzzword in the IT industry. As with all the other IT hypes, at the moment everything gets the label IoT and there are a lot of different definitions around. I do not want to add another definition. From my technical developer point of view it is all about getting sensor data into an application using a network connection. For the ease of use it makes sense to use the http protocol and other common technologies to enable that. Based on that sensor data, an application can e.g. trigger events. That was actually what we did at this Code Jam.

Craig Cmehil was our expert. This time he didn’t just bring some tutorials and access to systems for playing around. He also brought a box with IoT boards and sensors with him. There are already different ones available: Arduino, Raspberry PI, BeagleBone, just to name a few. But Craig brought Tessel boards with him. If you are not an electrical engineer and you are interested in playing around with IoT devices, it might be worth to have a look on their website: https://tessel.io/ With that board it is almost not possible to connect the sensors in the wrong way to the board. Furthermore node.js runs on the board. So you can develop your code for the device in JavaScript and you do not need to write some C code you do not understand (that’s what happened to me when I played around with Arduino :-))

The tessel board already blinking 😉

Craig started with a short introduction. He explained the difference between doing IoT with HCP and doing IoT with HANA: with HCP you can use the HCP IoT services to connect and identify the sensors and with “plain” HANA you do all the stuff IoT services offers to you on your own. So actually we could choose betweent two CodeJam topics. I chose to do it with HCP, as a host it was better to do it the faster way as I also had to take care about more important things, e.g. the food. Maybe some of the participants can share their experience they made?!

After three hours coding it was time to get some food. As usual at our CodeJams the BBQ was on fire and everybody got some food. During the “dinner break” we had some good discussions and after the break most of the participants just continued to code. So after seven hours there were still some people coding. Even after finishing coding, we still had some talks and a “Feierabendbier.” 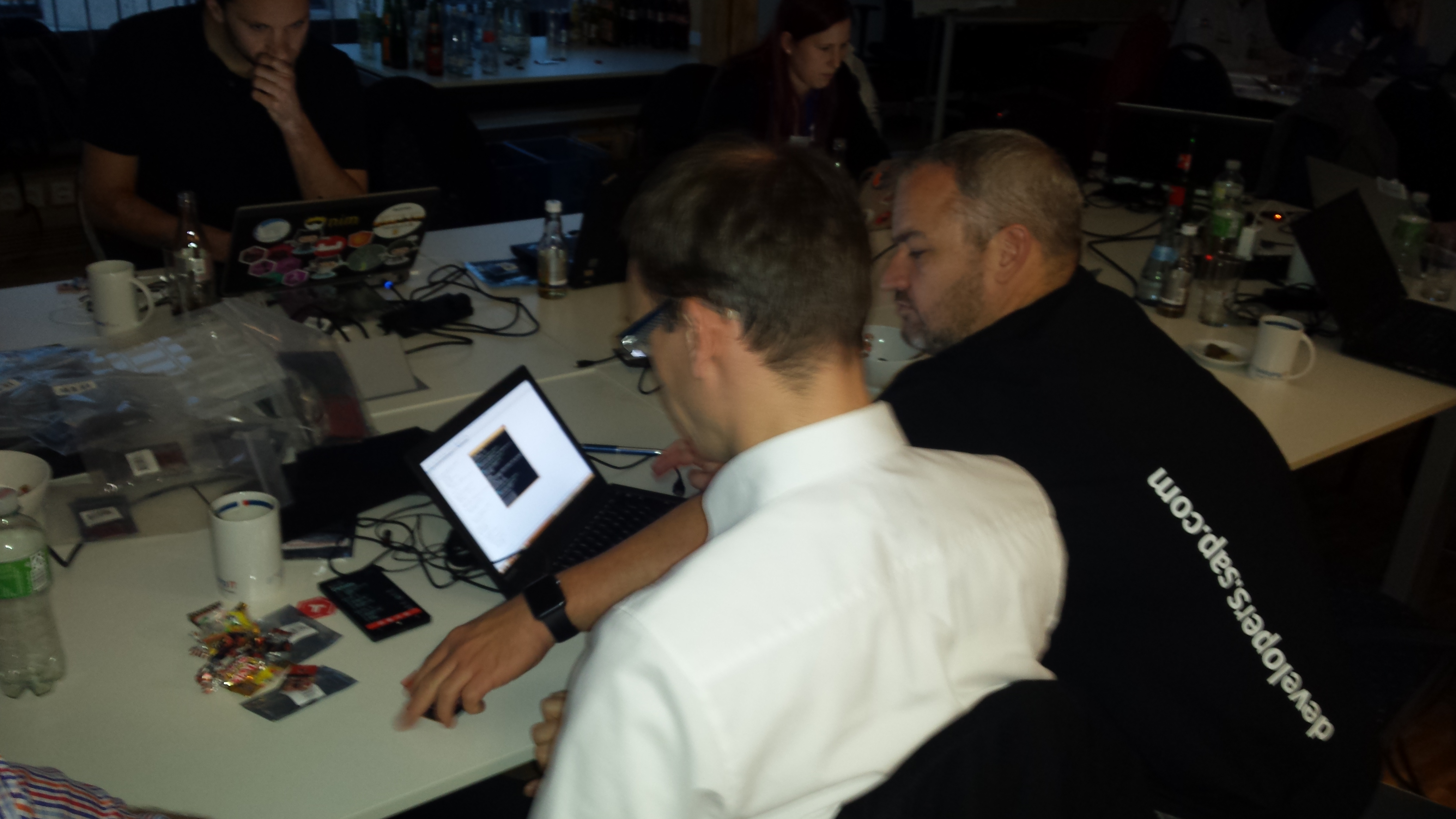 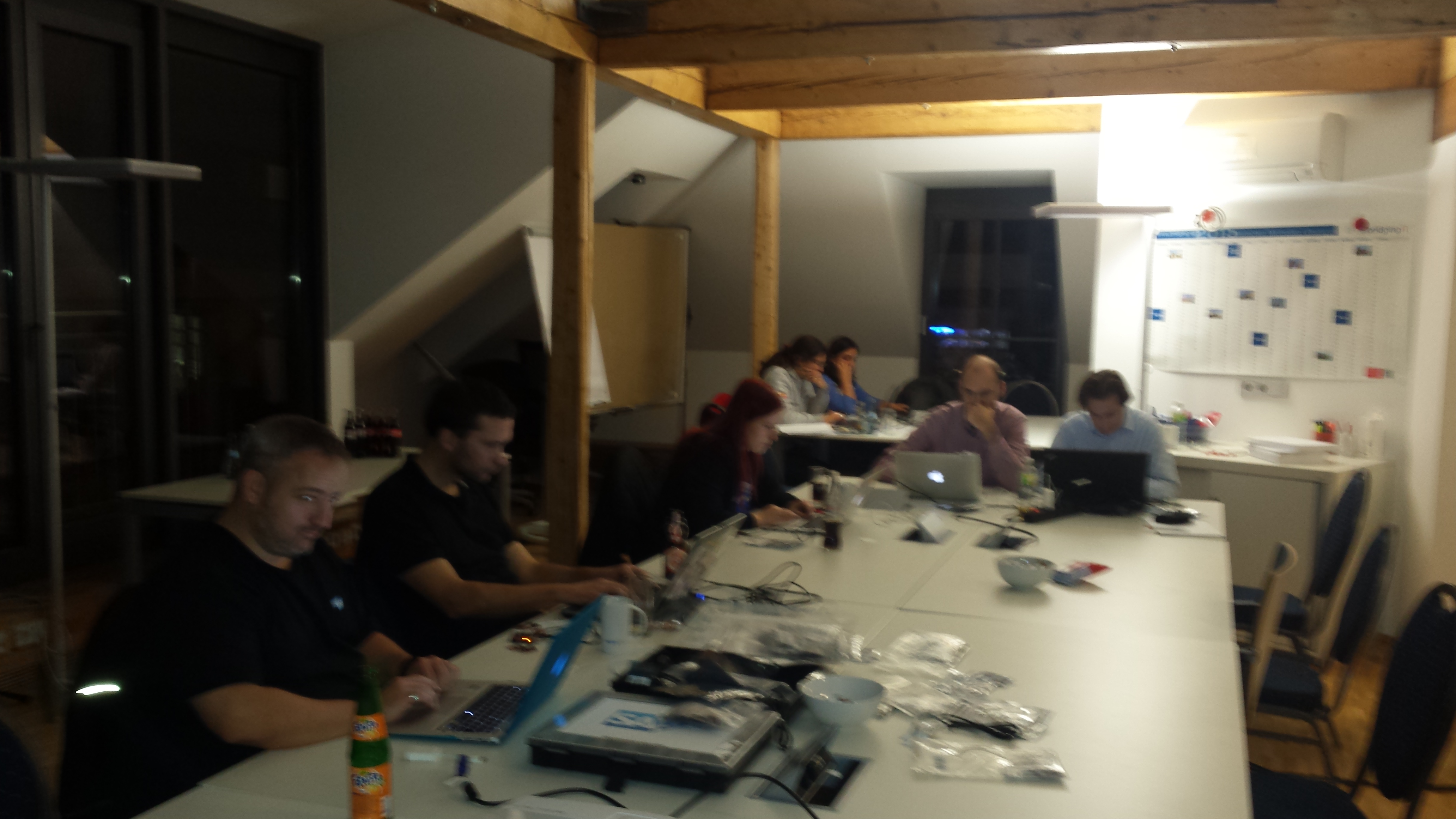 It was again a great CodeJam. Thanks to all participants and of course to Craig, who was an excellent expert again. I really appreciate that he did this CodeJam in between the two TechEds.

This was for sure not our last CodeJam but probably the last one in this bridgingIT office. The office is getting too small, therefore we will move next year. But there will also be a BBQ in the new office!

Please excuse the quality of the pics. I took my good camera with me, but the battery was empty. One could say, beginner’s mistake 🙂