The Voice of Walldorf

Musician and coach on The Voice of Germany Rea Garvey recently lifted the roof off the Walldorf canteen during the most exciting after-work party ever held at SAP. 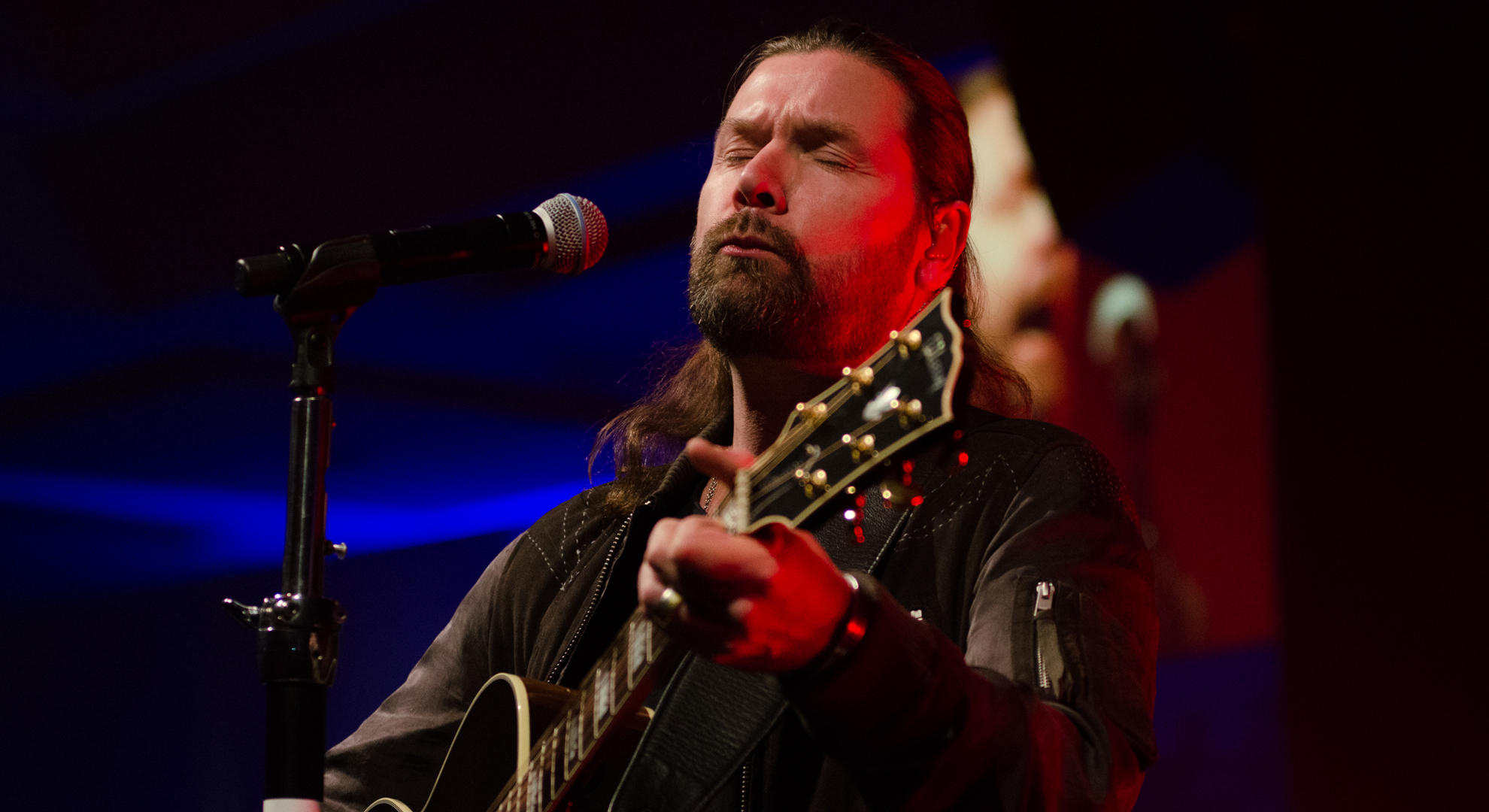 Twenty-five hundred lucky SAP colleagues recently won a ticket to a Rea Garvey concert live in the Walldorf canteen, and while there have been other musical highlights at SAP during the annual company Christmas party, this rock concert was one of a kind.

Rea had already heard the term for Christmas party, “Weihnachtsfeier,” plenty of times that day. He took the stage in front of the expectant audience dressed all in black and armed with a guitar and declared his concert to be an early “Weihnachtsfeier.” The atmosphere, however, was not very Christmas-like. Rea kicked off the concert with his rocky single Oh My Love, getting off to a strong start.

Then he thanked the Dietmar Hopp Foundation for donating €100,000 to his Clearwater foundation during the Solheim Cup. He was glad to be able to give something back to the people at SAP with this concert. A large crowd had been streaming toward the canteen since 5 P.M. Rea was impressed by how many different nationalities and cultures worked together in Walldorf, and praised these diverse employees’ teamwork. Obviously it must be highly efficient, since they had “even won me.”

This teamwork is what made the concert possible. Just a short three weeks ago, SAP employee Karin Fent came up with the idea of participating in the SWR3 music quiz. “I registered on the website during the weekend and asked permission from the Executive Board to participate. By Monday, I already received the news that we were on the short list for the quiz on Tuesday morning.”

Everything had to move very fast. To have as many participants as possible, Karin and ten other colleagues spontaneously set up a huge network inside the company. SAP would not be SAP if the software engineers hadn’t stepped in as well. During the course of Monday morning, some clever engineers under Franz Färber had already created a Web app. Through this app, participants, including many BA students, could list the artists and song titles they had recognized during the live quiz. A database then sorted out the most frequent answers. The result: SAP gathered 18 out of 40 possible points and won a concert by Rea Garvey in Walldorf, all through teamwork.

Rea lifted everyone’s spirit with upbeat songs like his famous hit Can’t Say No and an acoustic version of Super Girl. Soon everyone was clapping, singing, and dancing along. Rea also shared the story behind his song It’s a Good Life. He wrote this song for a friend who was having a hard time. In between songs, Rea told more such personal stories. Some were humorous, others more sobering. Rea also shared that he feels a strong connection to Germany, not only because of his success, but because this is where he met his wife of 15 years. He added that Germany proves that diversity can actually work, drawing upon the example of how many people are currently stepping up to help refugees. 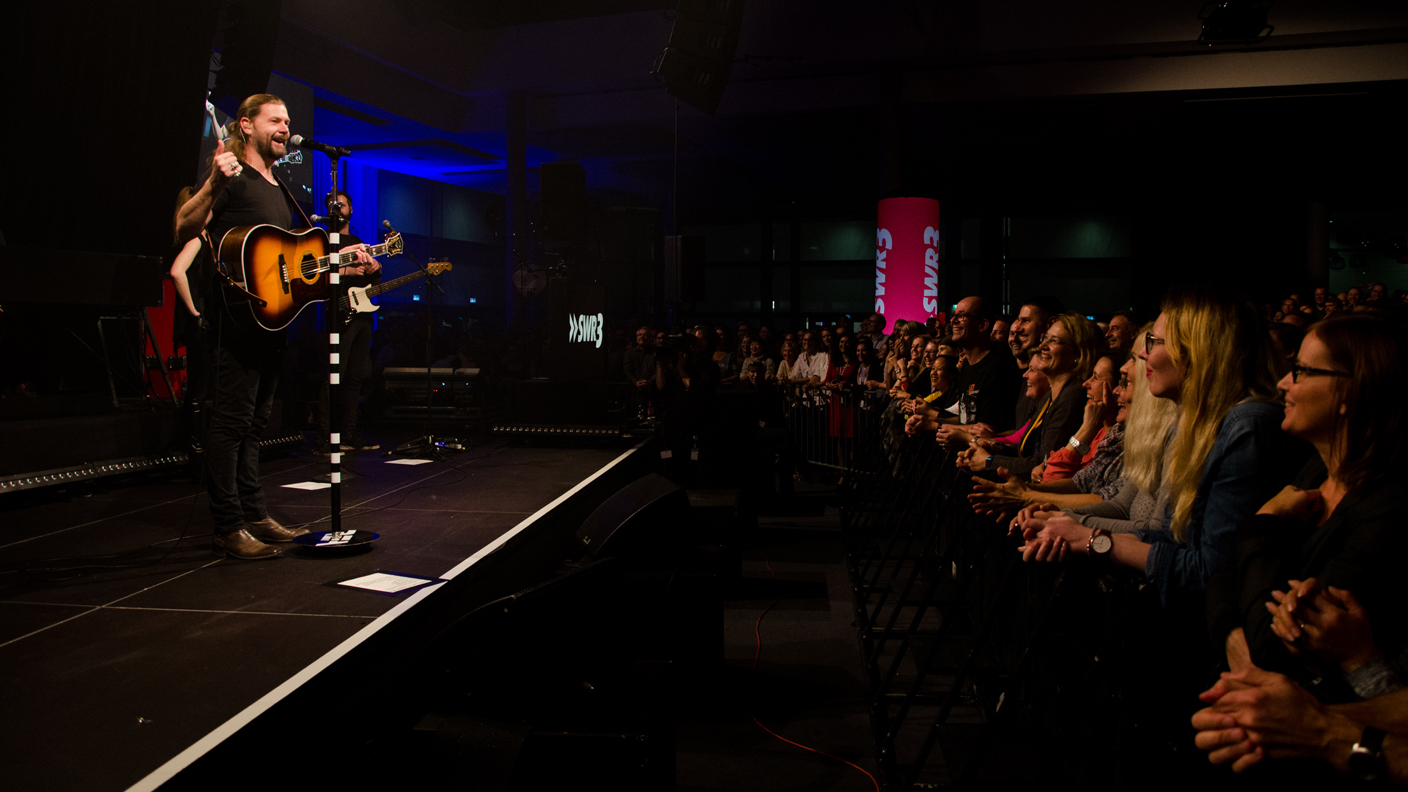 Thanks to event manager Dieter Seiberth and his team, everything progressed without a problem. They had two weeks to prepare the event and were under a lot of pressure. Dieter confirms that things can progress quickly and with little bureaucracy at SAP. “It was all very unexpected,” he says with a smile. “Such events are usually planned several months ahead of time.” Everyone involved both inside and outside the company reacted spontaneously and with great flexibility, including SWR3 and Rea Garvey himself, as the proportions at SAP were surprising even to the radio station. Dieter: “SWR3 had to adapt their technical setup and Rea couldn’t play unplugged as originally planned, but had to quickly round up his band.”

After singing some of his popular songs like Colour Me In and Can’t Stand the Silence, Rea even played some of the songs off his new album Prisma, including Fire and Armour. Around 7 P.M., he was going to end the concert with an encore, but one SAP colleague called, “The holiday party ends at three!” and Rea couldn’t resist playing one extra encore. After the concert, SWR3 moderator Daniela Hilpp asked the audience who SAP should invite to the real Christmas Party. They answered unanimously and with great applause: “REA! … GARVEY!”