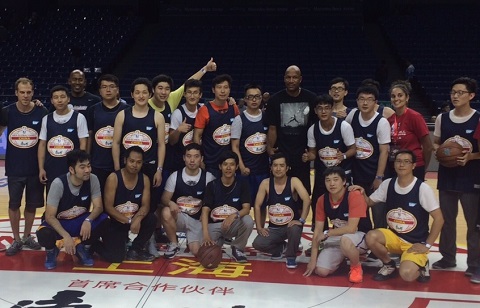 20 colleagues had a wonderful training time with Ron. Everyone was excited to play basketball with Ron under the huge SAP logo on the center screen in the Mercedes-Benz Arena. Our basketball club showcased SAP’s team spirit in front of NBA players and everyone was very proud of being a member of the SAP family.

During the clinic, Ron Harper and his professional coaching crew gave SAP colleagues a number of basketball training drills focusing on dribbling, passing, and shooting. Ron taught colleagues three things that he believed to be the most important in basketball: basis skills, communication and teamwork. At the end of the training session, all the players had a Q&A session with Ron, as well as the opportunity to take group and individual photos with the NBA Legend. 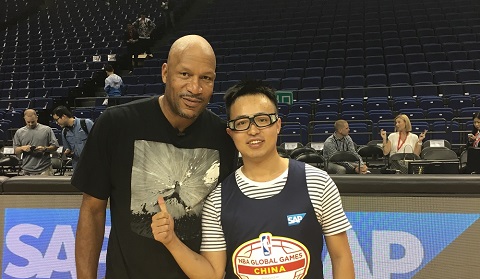 “Everywhere in the Mercedes-Bens Arena have our SAP logo. It give us confidence both on court and at work. It’s a great and unforgettable experience to play with NBA legend star.” —-from Yuan Hao, LoB FIN

“It was very exciting to have a chance playing with the NBA star Ron Harper, who has won 5 NBA final championships. He was a great basketball player and it was lucky for me to be trained by him. Through the training, he made me know that basketball was endless, which gave me more passion to basketball. It was a wonderful experience!” —-from Jony Qian, HR VT China

Ron Harper is most known for his time as a member of the Chicago Bulls where he won five NBA Championships from 1996 to 2001. Ron was an outstanding perimeter defender and was regarded as one of the best ball handlers in the NBA.