Chess has become popular due to the intellectual challenge it poses. It demands high levels of strategic and tactical thinking that many people find exhilarating. The game rouse to popular demand during the Soviet era and has remained popular ever since. About 160 countries have been members of FIDE. Among 160, top 10 rated countries have been shown in the chart below. Column chart depicts Grand Masters and International Masters and line chart indicates the total tilted in that country. 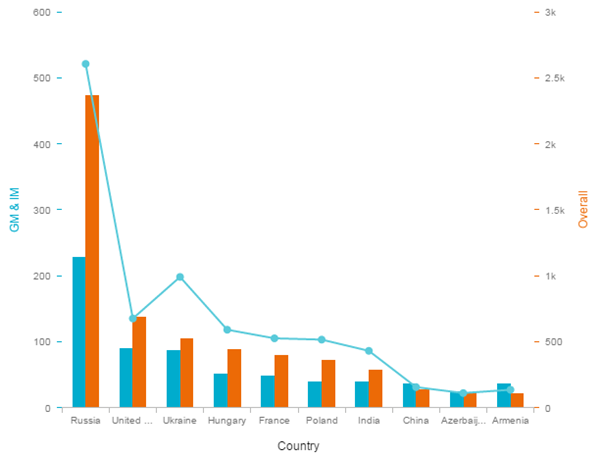 I am a novice when creating custom extensions for SAP Lumira. Chess game contains lots of tutorials and helping material in form of books and videos. But I went ahead and developed a CVOM extension in SAP Lumira to provide hands on interactive tutorial for chess game.

To start with our tutorial we have a chess board showing initial position of all chess piece in chessboard. Now user is allowed to select a chess piece from the list of all available piece (i.e. King, Queen, Rook, Bishop, Knight, and Pawn). Based on selected chess piece board will appear. User can navigate between next and previous state to see movement of selected chess piece. Also some special movement like promotion, En-Passant and castling has been explained in training phase. This will be demonstrated in the video.

Apart from the tutorial, I developed an interactive visualization in such a way that we can replicate the exact movement as played in chess game. This requires dataset of any chess game which now supports FEN string notation (Forsyth–Edwards Notation. So user can navigate next and previous state to view entire game. A video demo of “Anand vs Carlsen 2014 world championship Game 3” is included.

In the near future I would like to support all chess notations. Also, run time points calculation will also be supported to help the users for analysing.

Even if I have to admit this is not what I expect when looking for a Lumira Extension, the idea behind is kinda cool. I'm clearly not the best chess player (I'm pretty bad exactly 😀 ), but being able to replay a chess match from a dataset can be interesting for sure.

I don't know if you are yourself a skilled chess player, but one thing that I imagine for this extension is to provide anaylsis out of the box from what players did, how they moved their pieces. Maybe it's more related to SAP Predictive Analysis, but why not.

Last question, will it be open-sourced?

Thanks for your comment. Ya prediction of opponent movement is also possible. Need to analyse the perfect algorithm for analyzing the appropriate movement by a player. Also I've idea for drawing a graph based on particular movement which enables run time point calculation for end user.

I've published this idea for data genius contest. Will make it is stabilized.

for data genius contest and thanks for for your valiable vote in advance.