ChinaInfo 100 is a high end platform, providing academic support to China’s IT policy makers. In virtue of Henning’s great influence and our good government relation, a high level special summit was organized this time. The attendees include Chinainfo 100 top tier members, business leaders from large State Owned Enterprises and policy makers in IT sector. Just to list a few as below.

Later in the afternoon, Henning participated in a special session to meet with the president of Beijing Institute of Technology (BIT), and had a roundtable discussion with vice president and professors from BIT, Tsinghua, Renmin universities etc. 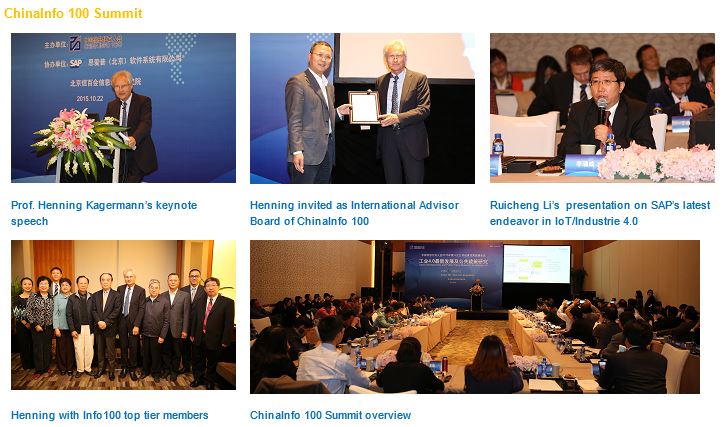 Henning made a keynote speech titled “From Industrie 4.0 to Smart Service World – Data-Driven Transformation of the Economy”. He introduced Germany’s digital journey, the vision for the 4th industrial revolution, including the platforms for smart services and new business models. According to Henning, the world is now heading towards data-driven innovation, building a platform of Industrie 4.0 is crucial as science and businesses are jointly fostering the development of Industrie 4.0. Ruicheng Li, MD of Labs China made a presentation on SAP’s latest innovation and achievements in IoT/Industrie 4.0 and digital economy afterwards. The key members of ChinaInfo 100 also delivered short speeches and had a warm discussion. 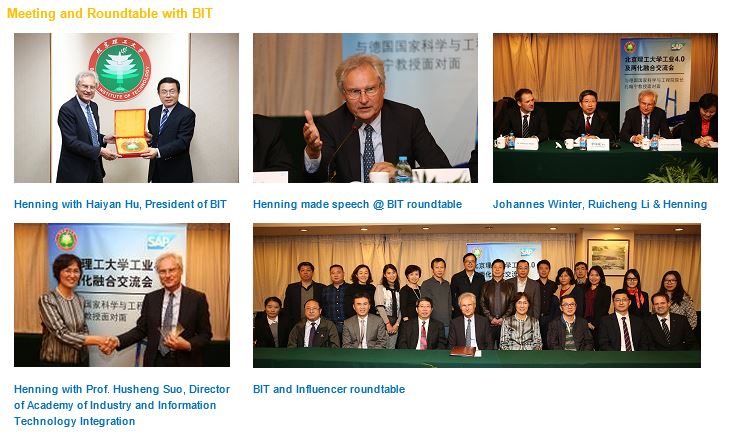 It’s very high profile and quality, customers take solid take-aways and it paved the way for our next step industry 4.0 market nurturing and customer engagement.

This summit successfully laid the foundation for the future Sino-Germany collaboration, and SAP is a bridge to this collaboration as an undisputed thought leader in the area of IoT/Industrie 4.0.

We appreciate this opportunity of listening to Henning’s thought-provoking presentation. His viewpoints on data driven innovation, as well as China, US and Germany’s development in IoT/Industrie 4.0 and digital transformation really impressed us.