So I am back home after SAP TechEd and finally managed to get things under control after one week of absence and found some time to write the blog covering SAP TechEd event in Las Vegas.

The purpose of this blog is to cover what was said during the two keynotes and to add some additional observations from the event. You might wonder why I bother to write down what was said if everyone can watch the recording (link is at the bottom of the blog). There are multiple reasons for this.

First reason is that keynote was literally packed with information and some important points might have been missed – I did this for the first time at the SAP Sapphire event this year (see my blog here: part1, part2 and part3) and realized that although I was sitting there in the audience I missed around 50% of “interesting details” which were said.

Second reason is that time to time I found it useful to refer back to what was said during the keynote and video replay is not very friendly in regards to searching for particular information.

Because the blog is long it is again divided into several parts – this first part is covering keynote from Steve Lucas – here is link to other part of the blog:

If you do not wish to read everything then just move down to the summary part at the end where I tried to summarize in my own words what the Keynote was about (but you will miss a lot).

He outlined that there is shift happening all in all economies – for example in financial services economy most of the trades on stock exchanges are not anymore made by people but rather by smart (cognitive) algorithms.

He explained that every economy in the world in going digital – disconnected and inconsequential is changing to connected and consequential – where one event like tweet or purchase can change how companies are behaving. Enterprise that wants to operate in these “DIGITAL ECONOMIES” need to become “DIGITAL ENTERPRISE”.

How does the Enterprise change to be Digital Enterprise? It needs to start with “DIGITAL CORE” where digital core is not a cloud app or bunch of business applications connected together. Steve defined digital core to be “Next-generation enterprise compute platform, coupled with cognitive business applications, delivering analytic insight to operate your completely connected business.” Then Steve mentioned concept of “DIGITAL DARWINISM” saying that since year 2000 around 52% of companies that were in Fortune 500 are gone (merged with other companies or out of business).

Then he explained “DIGITAL BENJAMIN BUTTON EFFECT” – in 1920 average age of a company was 67 years old – today it is 15 years only. In two years the expectation is to be only 12 years – he called these companies “baby companies” warning that “babies can be dangerous” and that established companies need to be on a lookout for these “dangerous babies”.

Next Steve pointed to Digital Talent Gap Report made by Capgemini that is analyzing large well established organizations coming to conclusion that more than 90% of these companies lack the skills to help their organization to become digital enterprise connected end-to-end.

Then Steve closed first part of the keynote by making declaration that “THE AGE OF THE DIGITAL ENTERPISE AND “CONNECTED EVERYTHING” IS UPON US”. He said that industries and economies will change tomorrow and it is about time to move and that SAP can help organizations to become completely connected and consequential digital enterprises – to be dangerous babies.

Steve Lucas introduced Jim McKelvey as person that helped to ensure that credit card payments will be in the age of digital.

[ Note: Next part was removed from the keynote recording. Might be nice to publish that separately on youtube. ]

Jim started in non-traditional way – explaining “how to put on the punty” (glassblowing technique). Conclusion of this story was that in glassblowing it is not only important to master the technique itself (what is done and how it is done) but also the timing (when it is done). If glass is attached too soon it will deform too much and if too late then it might not attach properly. Equally in business each idea needs to be introduced in the right moment – when the world is ready.

Then Jim said that every company today regardless of its industry focus is technology company and that it is having need for developers. Therefore he started non-profit project (launchcode.org) to provide free education (via MOOC) for people having limited or no programming skills and helping them to get full time paid job as programmer.

In the end he paraphrased that solving of today’s world problems can be compared to the experience of driving car in a snow storm when visibility drops to zero meters. If you stop then you risk that you will get hit by plow truck because the driver might not see you – so you must drive on blindly hoping that you still stay on the road and just getting occasional signals that will tell you if you are doing right or terribly wrong.

Part 3: Steve Lucas – SAP that you should know

Steve started by saying that SAP that you knew was about SAP Business Suite. 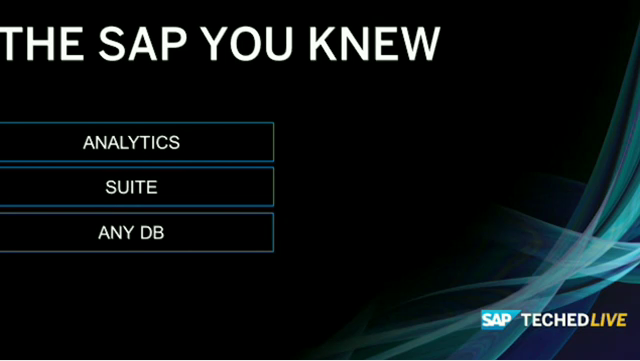 …SAP that you know today is about Analytics, new technology “S/4” (cognitive series of business applications connected to other cloud applications that SAP has acquired), all built on SAP HANA platform and on SAP HCP (SAP HANA Cloud Platform)… 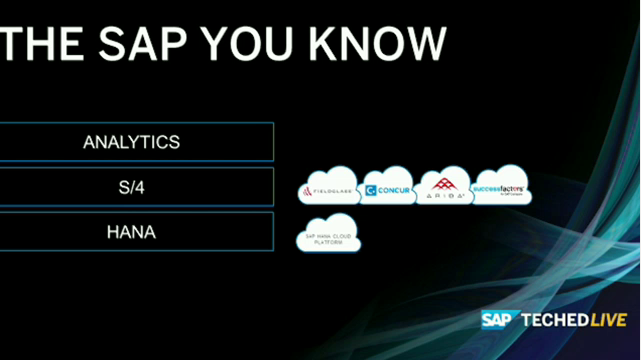 ..and SAP that you should know is “THE SAP THAT POWERS YOUR DIGITAL EXPERIENCE”. Analytics is being extended by new technology called “Cloud for Analytics”. “S/4” taking more cloudy shape as SAP will be delivering S/4 more through the public cloud and not only through private cloud. SAP HANA and SAP HCP (SAP HANA Cloud Platform) is extended by SAP Vora that integrates your enterprise to data stored in Hadoop. 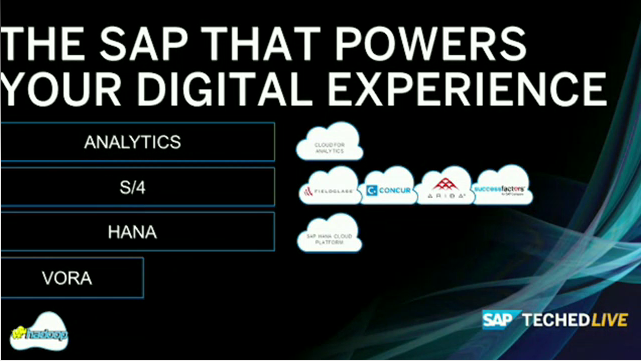 Steve explained that SAP Vora is technology built to bridge the worlds of big data (Hadoop) and transactional information. Steve used example of financial services company using transactional data (SAP ledger) to identify potential fraud. Instead of time consuming and inaccurate manual analysis of network logs with intention to detect intrusion attempts – now the company can connect (though defined business hierarchy) to the data lake full of network logs from past and present to perform analysis of suspicious anomalies using analytic tools like Lumira.

SAP Vora is designed to bring business interaction to big data – it lets the business user to explore the big data in hierarchical fashion and to connect seemingly inconsequential.

SAP Vora runs without SAP HANA – it is built to leverage existing Hadoop and Apache Spark Framework. It is offered on subscription basis around 1000$/year/node for SAP Vora. 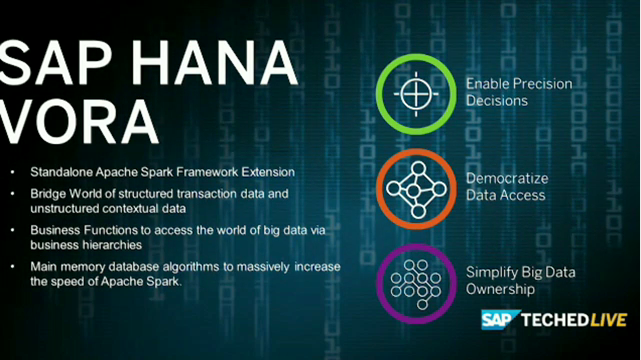 Next topic was SAP HCP (SAP HANA Cloud Platform). Steve said that HCP has taken off very fast and that SAP is having almost 2000 life customers on HCP (slide was showing 1853 customers).

Steve explained that HCP is full stacked development platform as-a-Service where you can develop applications very fast and get them easily integrated with any existing SAP application. It is built on open standards (CloudFoundry) leveraging Java language. 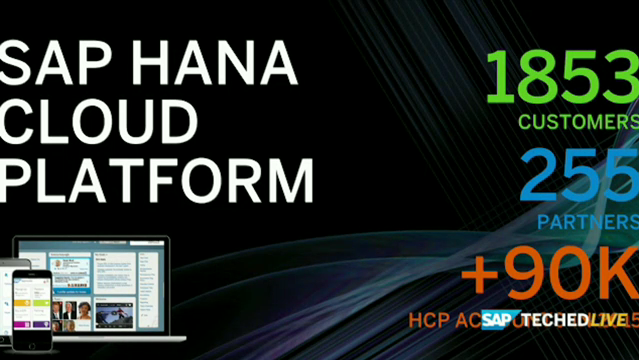 SAP is also having new technology called BUILD and is championing new development approach based on “citizen developer” (business user without coding skills that will design the application using drag & drop approach). Such application can then be exported into SAP Web IDE (SAP’s Browser Based Development Tool for SAP HCP).

HCP is also leveraged by SAP partners and start-ups – all offered applications can be found at http://www.sapappcenter.com (still BETA).

Steve mentioned that SAP HANA SP11 is coming (Q4-2015) and that major innovation will be HotStandby technology improving availability of SAP HANA.

[ Clarification – based on TEC105 session HotStandby is “Pure Log-based transfer” – so this solution will improve takeover times across two systems connected by SAP System Replication, will reduce transfer traffic and will allow active (read-write) / active (read only) operation. ]

Steve said that SAP will continue to develop and to innovate these technologies but at the same time SAP wanted to redefine analytics as we know it – therefore SAP is introducing SAP Cloud for Analytics (codename Orca). Be sure to watch the video at http://sapcloudanalytics.com.

It is end-to-end experience for analytics – versatile tool for all users starting with CEO and ending up with regular employees that can be used for all flavors of analytics – including reporting the past, analyzing the presence and predicting the future. Steve then introduced Stefan Sigg (SVP Analytics at SAP) that explained the reasons for developing SAP Cloud for Analytics.

Stefan said that SAP worked with customers in understanding how they work with analytics and it became clear that customers need unified tool that will be able to deliver seamless experience across various analytic flavours including BI, planning, forecasting, budgeting and predicting.

Then Steve compared SAP Cloud for Analytics to other cloud players (see table below). 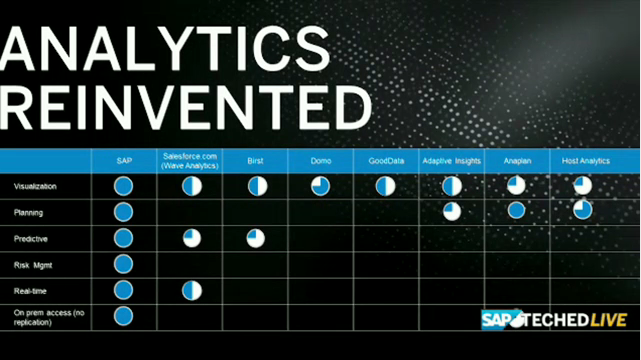 He said that SAP Cloud for Analytics is open for business and explained that licensing will be done per user with cost around 25$/user [ assuming per month ]. Then Steve stated that SAP is committed to elastic high-scale accessible technologies that can be used by one user or hundred-thousands of users.

In the end Steve wrapped this part of keynote by statement that all these technologies are being offered to customers to allow them to build unfair digital competitive advantage.

I will not go into much detail in this part – just bullet-point some interesting facts.

#1 Demo: THE NEXT UI IS NO UI by Martyn Mallick (Head of Alexa Ecosystem, Amazon)

Steve Lucas clearly explained how the world is changing and that every enterprise need to transform itself into “DIGITAL ENTERPRISE” that is able to seamlessly integrate all parts of its business together – transactional data in the core, big data in Hadoop data lakes, data from IoT devices and event public data from various online sources including Twitter – and to react on connecting these separate data sources together.

He said that for doing this enterprise will need technology and that SAP’s “DIGITAL CORE” is able to address this need – here SAP is positioning their SAP HANA Platform and SAP HANA Cloud Platform (HCP) extended by SAP Vora (for Hadoop integration) and surrounded by “S/4” applications (S/4HANA connected to other SAP cloud technologies) – all that enriched by analytic solutions (existing on-premise tooling and now newly announced SAP Cloud for Analytics).

At the end of keynote there were various demos and customer discussions around use cases combining multiple SAP technologies together. For me the most interesting demo was SAP HANA @ PETABYTE SCALE (see above).

I would like to express big thanks to SAP Mentor and SAP HANA Distinguished Engineer programs and also to SAP for giving me change to participate at the event as SAP Blogger. It was fantastic event and fantastic experience and the only thing I regret is that I am still unable to clone myself or at least spawn some “parallel threads” so that I could participate in more activities as some cool things were happening in parallel… sigh… maybe next time.

Thank you for reading the blog – let me know your feedback so that I can do better job next time. If you will spot some interesting blog or article going more into details for some of the topics mentioned above then please add link as comment.