Understanding DSM – That’s so meta! and the Assigned to Managed System feature

“So I just saw this film about these people making a movie, and the movie they were making was about the film industry…”

“Dude, that’s so meta. Stop before my brain explodes.”

One of my favourite features of Decision Service Management is the neat way it handles metadata references, so that I can create rules for any managed system (i.e. a system whose rules are governed by DSM) referencing data dictionary definitions, database tables, function modules and ABAP classes *without* having to transport those objects into the DSM system itself.  It really is a very cool answer to enabling all sorts of calling applications to integrate with decision services (aka BRFPlus rule functions) without overburdening either the DSM or the managed system.

But if you are new to DSM, it does take a minute or two to wrap your head around how metadata works, and how that impacts what you need to do in DSM.

Why we need metadata

E.g. the database table CRMD_ORDERADM_H exists in a CRM system but not in ECC or SRM.

DSM needs to know whether that dictionary object can be used in a rule or not, i.e. will the rule run in CRM or in SRM or in ECC or HANA?

E.g. The structure  ZMyTableType might have 5 fields in QAS and PRD, but in DEV it has 7 fields as it is being extended as part of a project.

DSM needs to know whether the structure matches what the rule is expecting – i.e. have the new fields been transported from DEV to QAS yet – before it can deploy the updated rule to the QAS system.

Now of course DSM could maintain a remote connection to all of the managed systems all of the time, just to make sure everything was in synch.  But that’s rather tedious and inconvenient, especially when different systems may need to be down for maintenance at different times.  It’s even more annoying for sandpit systems, where the system may be here one day but gone the next. You don’t really want to have to go clean up all those rules, especially after a successful proof of concept when you want to retain your rules as much as possible so you can redeploy them to your DEV system to start the productive project.

So DSM is smarter than that.  It uses metadata so that:

b) It only holds metadata references not the actual metadata itself.

Think of the metadata reference as a kind of copy of the essential details that DSM needs, so that the actual metadata – dictionary objects, function modules, ABAP Classes, etc. – never need to be transported into DSM itself.   The metadata reference means DSM knows enough about them so that the rules build can continue without the managed system having to be available all the time.

Usually we want the DEV system to be the baseline, so that we follow the transport sequence between the managed systems themselves.

The way we baseline the metadata in DSM is we assign the rule application which holds the rule function to the managed system.  In other words all data objects, rule objects including expressions and rule functions, and even certain exit classes are covered as using the same metadata baseline.

Tip: Note just because a rule application is assigned to a managed system, it doesn’t mean that every data object needs to use a metadata reference.  Decision services can still use BRFPlus native data types (such as Timepoint, Amount, Text, etc.)  freely.  Assigning the rule application to a managed system just gives us the option to use metadata references where they make sense.

So say you have decided you need to assign the application to managed system.  There are two(2) main times that you normally do this:

Explaining these options in a little more depth…

Option 1: When you create a rules application directly in DSM, you can assign it to a managed system. 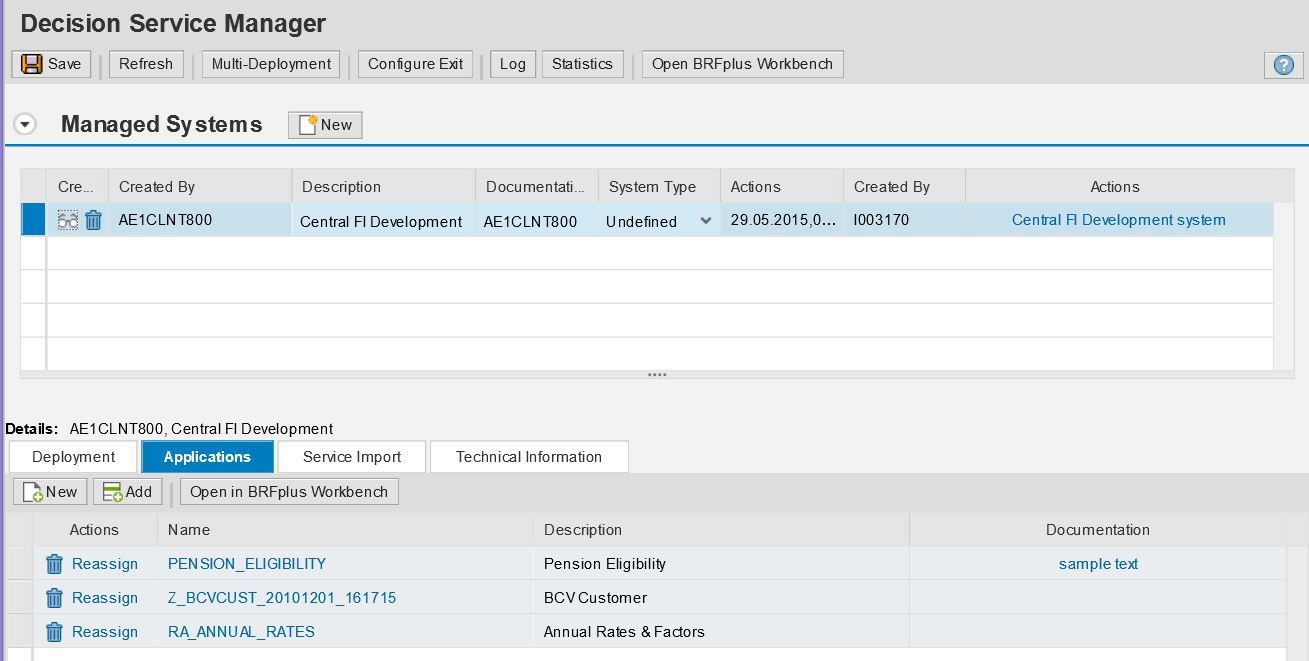 The easiest way to do this is in the Decision Service Manager workbench.  Select the managed system in Edit mode, go to the Service Import tab, start the Search for Active Services, find the service you want to import, and start the import by pressing the icon button in front of the service. 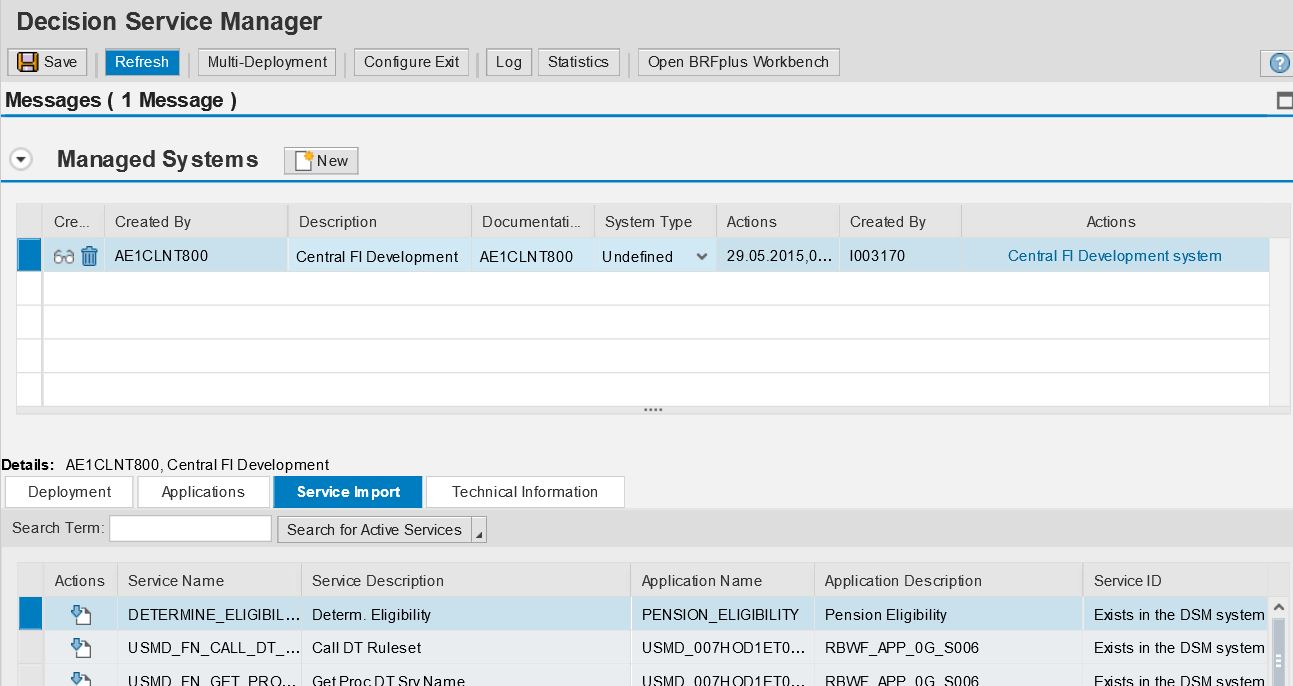 In the pop-up window where you confirm the service that you are importing from the managed system, simply tick the checkbox “Assign application to managed system”. 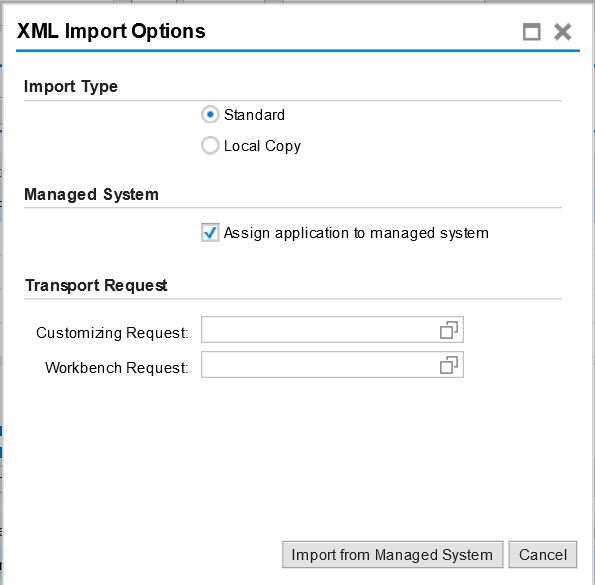 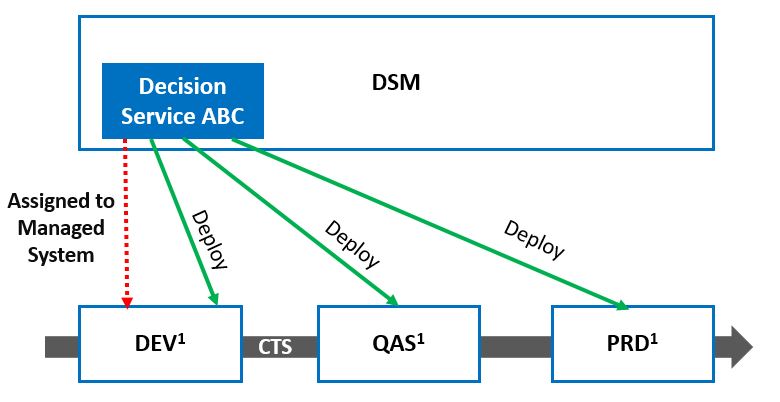 So how does DSM know it’s safe to deploy to QAS and PRD? Well that’s the smart bit… prior to deploying it validates whether the actual metadata in the target managed system match the metadata references in DSM.

For instance, if an Element Data Object references a ABAP Dictionary Data Element, the name, type and length need to match. If the actual metadata doesn’t match the metadata references the deployment will stop and give appropriate error messages on the log indicating which metadata references don’t match.

This avoids decision services being accidentally deployed to the wrong managed system, e.g. avoid a ECC rule being deployed to a SRM system.

And it also avoids decision services being deployed too early (i.e. before the actual metadata itself has been transported) to the right managed system.

In fact there are several validation points where metadata references can be checked.  The important pre-requisite is that the managed system must be available and connected to DSM at the point of validation.  If the managed system is not available, DSM will give an error indicating this.  You won’t lose any data or settings in DSM when this happens. At most you won’t be able to update the reference until the managed system comes back online.

These are the major milestones where metadata references are checked:

What happens if you want to create common decision services or rules objects that are deployed to multiple target systems? Say you have a set of decision tables with certain rates and factors that you want to share to ECC, CRM, SRM and HANA.  How do you handle metadata references then?

There are basically two(2) choices:

Having faced this situation myself on customer sites, my preference is for option 2 – only use native BRFPlus data types in common rules.  While option 1 is possible it’s all too easy for rule developers to forget and create an unwanted metadata reference that is a pain to fix up afterwards.

What you really don’t to have to do is to create a special CTS transport that transports the actual metadata references to all target systems.  It will work – if done properly – but it tends to require advanced CTS configuration, landscape and governance, for what is typically a very small set of exceptions and that generally leads to unnecessary confusion for developers and administrators… and delays in getting your decision services deployed.

Viewing metadata references in the BRFPlus workbench (of DSM)

What if, as a rules developer, you don’t have access to the Decision Service Manager workbench?  How can you see whether a metadata reference exists or is possible?

If you are working in the BRFPlus workbench of DSM, then you can see the Assigned to Managed System icon next to the rule application and against any data object or expression which uses metadata references.  The icon looks like this:

You should see the icon in the title area of the relevant rule application, data object or expression. For example:

Once the rule application has been assigned to the managed system, you don’t need access to the Decision Service Manager workbench to create metadata references. That’s all just normal rules build in the BRFPlus workbench of DSM.

The one thing that can break your metadata references is changing the name of the actual metadata that it refers to.  For instance if you have a data element called ZZCUSTOM in your managed system, and you change the name to ZZCUSTOM1 that will break your metadata reference.  Which means you will need to not only Refresh Binding but also will often need to remap any references in your rule objects to that field.  This is even more of a pain when dealing with structures and tables.

The easiest way to avoid these problems is to encourage developers who are creating the actual metadata to use your corporate naming conventions from the beginning – even in sandpit systems.  Then you minimize the number of metadata changes you need to deal with.

So I hope this blog clarifies how Assigned to Managed System and metadata references work in DSM.

Enjoy your metadata and if you have any queries about metadata make sure you post a discussion in the Business Rules Management community!

Excellent post Jocelyn which should help clarify the difference between managed systems and deployment targets. Do you know if there is a DSM book on the way or will it be worked into a new revision of the BRFplus book?

Thanks Nick! There is a new DSM/BRFplus book released in German by our friends Carsten Ziegler, Christian Lechner, Tobias Trapp et al

I have already suggested to SAP Press that translating this into English would be a great idea and better than simply revising Carsten's older edition.

But more voices are needed to convince them I think so please add yours .. their site is SAP PRESS

Brilliantly written and articulated! Now I can use excerpts from here to tell folks all about DSM (as part of an elevator speech).