Refugees Aid Workshop at the SAP AppHaus Heidelberg: How Can SAP Contribute to Refugee Integration?

From January to September 2015 approximately 65,000 refugees requested asylum in the German state of Baden-Württemberg (where Walldorf and Heidelberg are both located)but the total number of refugees in the state is even higher as many are not yet registered (https://www.lpb-bw.de/fluechtlinge_baden_wuerttemberg.html). By end of the year, the state of Baden-Württemberg expects to receive close to 100,000 asylum seekers. As this topic is top of mind in Europe and help is urgently needed, SAP collected donations from employees and the SAP board pledged to match donations to support refugees in Germany. But apart from financial donations: How and in which way can SAP best leverage its talents and competencies to improve the lives of the people coming to Germany? To find an answer to that question, among the many initiatives SAP is undertaking to tackle the refugee crisis, SAP Corporate Social Responsibility (SAP CSR) together with the SAP Design & Co-Innovation Center organized a one-day Design Thinking workshop in the SAP AppHaus Heidelberg. Gabriele Hartmann and Sabine Herzberg from SAP CSR began the day by outlining the purpose of the event: to come up with feasible ideas about what the company can do. The input and ideas gathered would then be evaluated and woven into an overall concept for SAP’s activities. The challenge for the day was set: “Design SAP’s contribution for refugee integration today and tomorrow”.

A diverse group of people attended the workshop: 30 SAP employees, different initiatives and organizations like representatives from the refugee camp at the Patrick Henry Village, Kids World Cup DJK Handschuhsheim, Über den Tellerrand e.V. and Wir für Flüchtlinge e.V. listened very closely to the needs and stories of the seven refugees from Syria, Iraq, Eritrea and Gambia to understand what their biggest pain points in the camps are. Next to the refugees´ perspective, workshop attendees were also able to listen to the facts and figures from social workers as well as from a pastor who regularly visits the refugees in their camps.

For example, a Syrian refugee, who arrived in Germany three months ago, told the audience about his experience living in the Walldorf camp. Due to the shared bedroom situation with more than one hundred other refugees, he explained that lack of privacy is a real problem and how hard it is to get any sleep during the night. Also problems like a lack of cleaning supplies for their rooms make the lives of refugees very difficult. However, the wish that was closest to his heart was the following: He desperately wants to connect with Germans to better understand German culture and to become a part of the society. 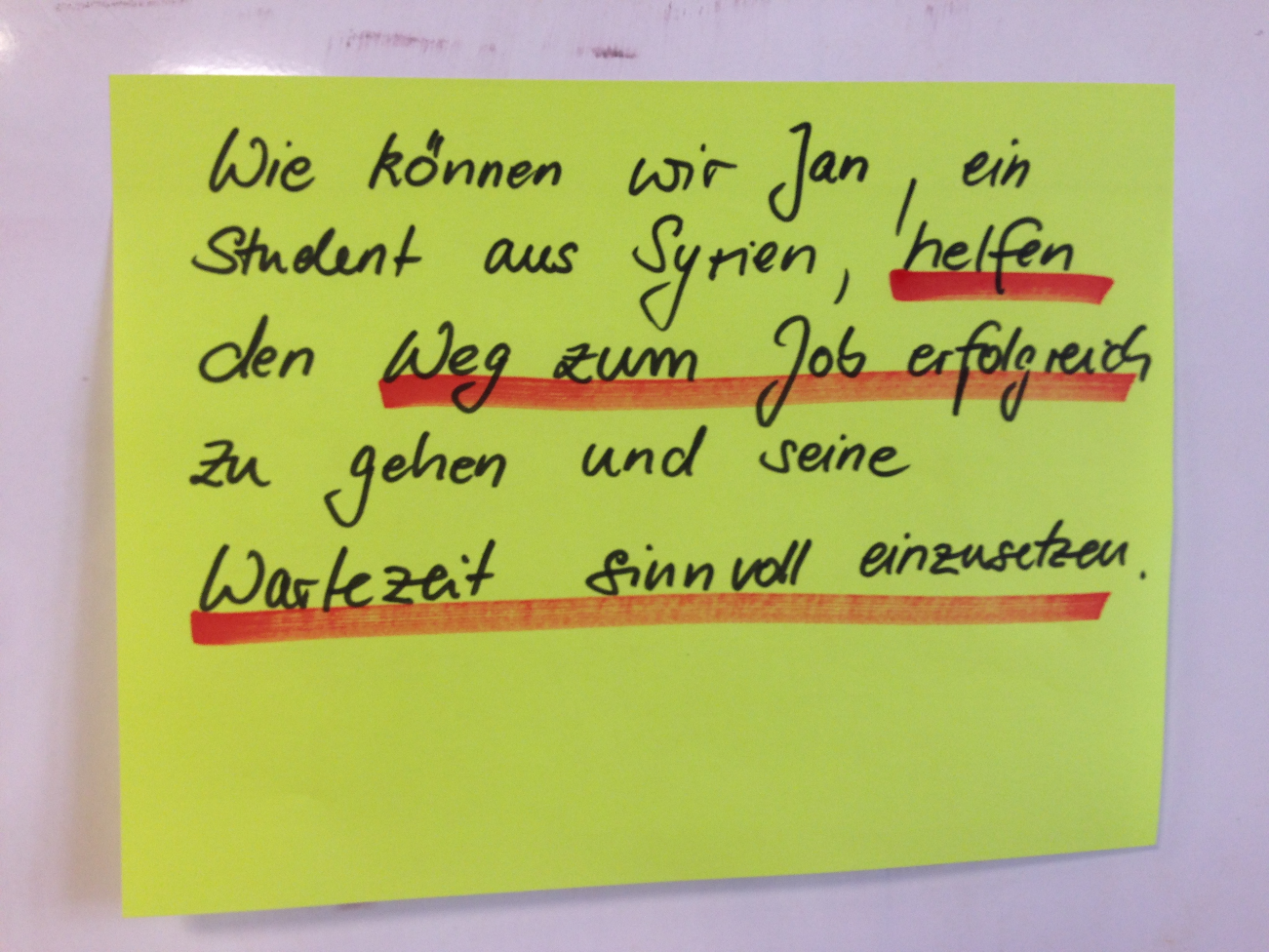 Nine mixed teams used the Design Thinking method in order to develop concrete ideas how SAP can help. First of all, each team had to decide which topic they wanted to work on, e.g. accommodation, school, job, language, leisure, culture, family. By interviewing the refugees that were part of the respective group, the other team members could clarify their needs. The group further narrowed their focus with questions like – “How might SAP help to create connections and build new ties between refugees and locals?” Afterwards possible solutions were jotted down on post-its and then clustered on whiteboards in a brainstorming session.

Each group presented their refined concept to the audience in a short summary. The most common idea was connecting people to increase cultural understanding and respect between refugees and Germans. One team thought of creating an environment for “being together” in a common place. There was a suggestion to rent a building in Walldorf owned and run by SAP where refugees have the possibility to come together with local families to have a chat, to cook together or do some joint leisure activities. As basic language skills are the first steps towards integration, language courses could be offered in such a common space as well. The refugees reported that especially privacy is urgently needed, therefore special computer corners could be a solution to support online conversation with family and friends.

However, to really integrate into German society, a job is absolutely crucial to refugees. Therefore, one team suggested to more effectively use the waiting time until they are allowed to look for employment by offering information sessions upon their arrival on where to find the nearest job center, how a work day in Germany looks like, how to write a CV in German and which job search portals are useful. 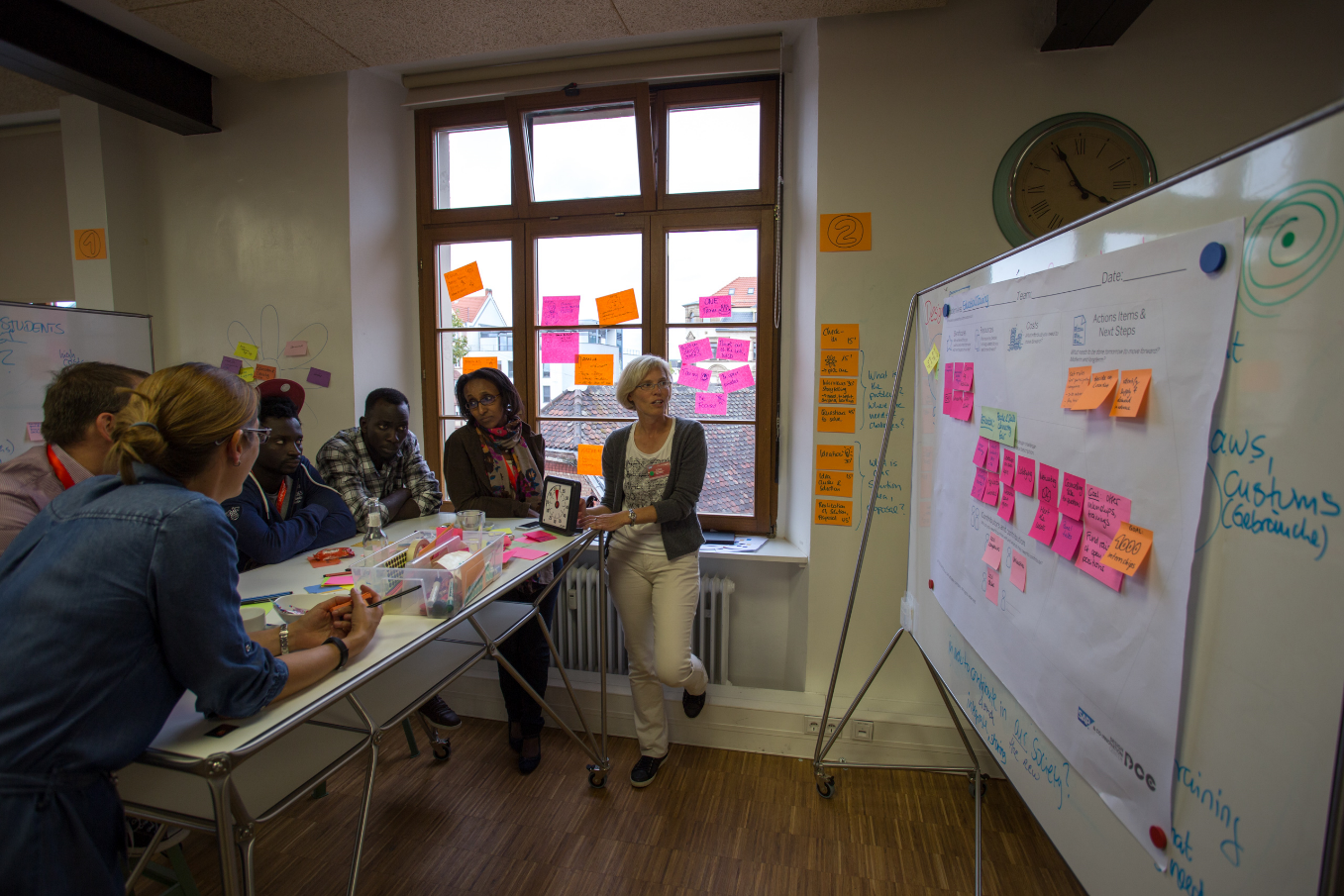 The outcome of the day was very positive: All participants learned from each other and could share their insights and problems in order to come up with useful ideas that can actually be realized. In addition the refugees were very grateful for this unique initiative to get in contact with Germans outside of their camp environment. A Syrian refugee summarized it as follows: “I found it really interesting to see what SAP is trying to do for us. I am here because I have a message to share. Since three months I am in Germany and I am really looking to find connections to then find a job. That is what we all wish for.”

The SAP AppHaus Heidelberg is happy to have hosted this social event and is looking forward to seeing the projects come to life that the SAP CSR group will start in order to help refugees in their daily lives.

great initiative! Thank you all.

Great Note Franziska, can non-sap employee support to this group and how?

thank you! Best would be if you subscribe to the "Refugee Volunteer Group" on Jam and inform yourself about the different initiatives. This is a group for all SAP employees who are engaged or want to become engaged in voluntary refugee activities. Maybe also non-sap employee can support.