The Genius of Youth

Having never attended a hackathon before I didn’t know what to expect.  My only reference point was that scene in The Social Network where developers take shots of alcohol in a party-like atmosphere while pounding ferociously on their keys to win. So when I found out that SAP was the title sponsor of the City of Waterloo’s first CodeFest I jumped at the opportunity to volunteer and discover this crazy new world.  In fact I was even asked to be a judge – more craziness!

(Some background: This hackathon was intriguing because participants were given actual open datasets by the City of Waterloo to work with – stuff like building permits, street trees, and bylaw parking infractions. Their mission:  to create applications with this data to make it useful for citizens.)

You can imagine my shock when I arrived at 6:30 AM on Saturday morning to a subdued scene. No cow bells, no wild cheering crowds. But slowly participants began to trickle in…setting up shop with their laptops.  After some time groups began to form organically.  And then they coded. And coded. And coded some more. There were some fun artsy activities that the City put on like colouring and ukulele lessons. There was also lots of eating and caffeine intake.  In that time we also had mentors from SAP Waterloo help field questions related anywhere from big data collection to design to Android 101.  And then the 36 hours were up and it was judging time.

I didn’t know what to expect…I mean they only had 36 hours…but this was Waterloo after all (do I need to say more – Silicon Valley of the North!).  And then I was appropriately blown away! 15 groups presented their applications in just 3 minutes each.  While there were only 3 main winners, I was amazed at the development strength this group exhibited.  There were a lot of full functioning mobile apps presented, and someone even learned WebGL over the weekend.  Now more about the winner because this app idea and the people behind it stayed with me well after the event was over.

The winning app was called Timber, a play off of the raunchy Tinder application.  It was an app that allowed users to show love towards trees including allowing users to rate trees and create their own treetups.  Oh and it also maps out every single city owned tree on Google Street View (a last minute sidenote by the group).  The winning team appeared shocked that they had won, as to them I think it was a submission done more for laughs.  But they actually stumbled upon a BIG headache the city deals with a lot…people calling-in regarding tree maintenance (with often the first question asked, “Who owns the tree?”).

Why I liked it?  This app not only solves city tree ownership issues (while getting people to engage with nature), it’s a crowdsourcing framework that can be applied to many city owned assets that require maintenance. And crowdsourcing apps are only as good as its user adoption and this team already solved that too.  They smartly used an existing brand and user paradigm that is VERY well known (even for non-tinder users, who hasn’t heard of swipe left/right to dislike/like).  I didn’t find out until later but 2 of the 3 members were not even University students…they were HIGHSCHOOLERS (good thing there was no alcohol served).

I read a startling stat that in the next 10 years millennials will create 75% of our workforce.  If these creative geniuses are the type of folks I can expect to work with in the future then it certainly looks promising! I seriously can’t wait – 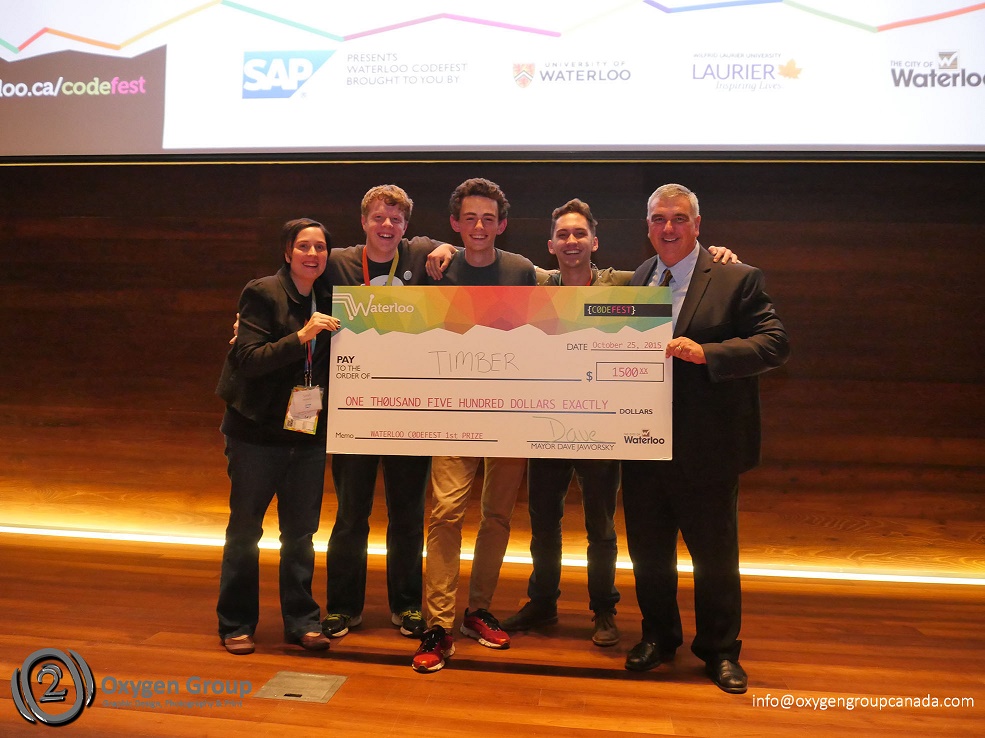 (Picture caption from left to right:  Me with winning team Timber and the Mayor of Waterloo, David Jaworsky)

>> Sarah McMullin is a Director for Emerging Technologies at SAP Waterloo.  Working for a big company does not stop her from running simple like a startup.  Successful creator of junior honey badgers and applications that create new markets.  Fascinated by biogenomics and food fraud.  Follow me on twitter @Sarah_Sugoi