However there are also scenarios where it is necessary to have different values of the same variable in different data sources. This is the reason why Design Studio also offers the possibility to run an application in “unmerged” mode. This is activated by setting the application’s property “Merge Prompts” to “false”.

As mentioned in the previous chapter the merging of prompts is done by the “backend” (BW, HANA). It is not a feature of Design Studio itself. The backend uses its session to store one value of a variable and shares this value among multiple data sources running in the same session.

The parallel processing is achieved by creating multiple sessions in the backend and using them independently to achieve independent/parallel execution. As backend sessions do not share any state, there is no possibility to share variable values.

How Do I Emulate “Merged Prompts”?

Emulate the User Experience of the “Prompts Screen”

When prompts are in “unmerged” mode the prompt screen contains all variables for each data source. If multiple data sources share the same variable, the user is prompted for each of these values: 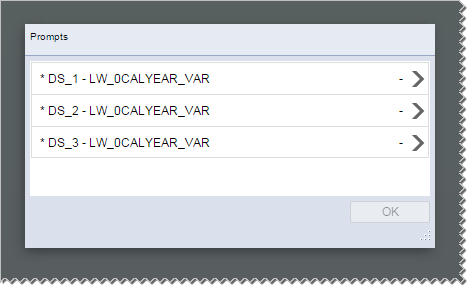 The application offers a property “Prompt Setting” to customize which variable values are shown in the prompts screen. By default all are shown, but this setting allows removing values that shall not be visible as well as changing the sequence of the shown values: 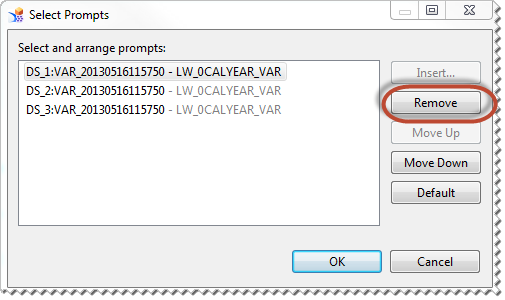 By removing the “duplicates” of each variable and leaving only the first occurrence in the list, the user gets a prompt screen like in “merged” mode: Each variable appears only once.

Setting the Values of the “Other” Data Sources – Part I: At Startup

When users get the adapted screen they obviously enter the variable value for only one of the variable values. However to emulate the behavior of “merged mode” the entered values need to be set also to the “other” data sources which do not occur on the screen any mode.

This is achieved by retrieving the entered value via script and setting them to the “other” data sources. The event when this should be done at application startup is “On Before Prompts Submit” of the application. In this example the prompts of “DS_1” are still on the prompt screen and “DS_2” and “DS_3” were configured not to be shown. This will require script coding transferring the value from DS_1 to DS_2 and DS_3:

This code sequence needs to be there for every affected variable. In this example only the variable “VAR1” was considered.

Setting the Values of the “Other” Data Sources – Part II: After Startup

Using parallel processing requires that “Merge Prompts” is set to “false”. However if the application shall behave like in “merged” mode, this can be achieved by following a few simple patterns shown in this blog.

good view on this topic, Martin - especially important to point the dependency between those functions.

@all: more details on those blogs on the functionality:

The scenario which is described in the linked document "View on Variable “synchronized” Unmerge Scenario" does not work anymore. (I cannot write a comment there)
This used to work great. But not anymore after Lumira Upgrade. "On before prompts submit" cannot call global scripts anymore. ->  Note 2380308

scripts in  “On before prompts submit” and "On Variable Initialization" always had very strict restrictions on APIs that are allowed. Reasons: If prompts are not submitted, almost all API calls would lead to internal errors. This is the case for almost all API on Data Source components but could also affect other standard components, especially if they are data  bound or use Property Binding.

In all Design Studio and Lumira Designer version the script editor checked those limitations.

Global Script functions are not allowed, because we don't know from where the function is called, therefore such a function is not checked for the limitations.

However there were some bugs in some releases that e.g. allowed to call global script functions. Such errors have been fixed in the meantime.