Vespa Uses Data to Design a Scooter for the 21st Century

The Vespa scooter might be the purest combination of form and function that ever rolled off an assembly line. Its distinctive shape and classic pastel paint colors started attracting loyal fans ever since Italy’s Piaggio & C. SpA first introduced the scooter nearly seven decades ago. 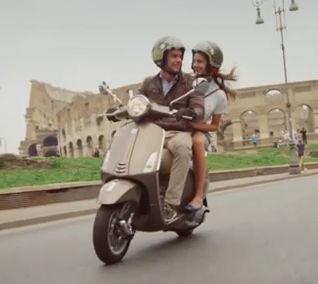 Well, a silver 1955 Vespa GS 150 is parked in the permanent collection of the Museum of Modern Art in New York City. And a CNN survey ranked the Vespa among the 12 best designs from the past 100 years.

But form is only half of this very successful pairing. From the beginning, the Vespa scooter has also been designed for the comfort and enjoyment of the people riding it.

In the second half of the 1940s, Italy needed a modern and affordable vehicle that could transport the country’s people along roads and byways decimated by war.

Industrialist Enrico Piaggio took up the challenge and had his engineers construct a new kind of motor bike. The design that captured his imagination featured a complete engine cowling that shielded the rider from dirt and grease, a flat floorboard on which you could rest your feet, and a large front fairing that provided significant wind protection.

Piaggio thought the little scooter looked like a “vespa” – that’s “wasp” in Italian – and the name stuck.

These days, there are a full line of Vespa scooters, and Vespa is one of seven companies owned by the larger Piaggio Group. The Piaggio Group is Europe’s largest manufacturer of two-wheel motor vehicles with products that include scooters, mopeds, and motorcycles marketed under various brands such as Piaggio, Gilera, and Moto Guzzi. The group also operates in the three- and four-wheeler light transport sector.

In all of its markets, a consumer-centric focus still guides Piaggio today. And increasingly, it is a strategy that’s data-driven.

Understanding What the Customer Wants

In a recent video, Piaggio’s chairman and CEO Roberto Colaninno describes how the company’s marketplace continues to evolve.

“For Piaggio, the most important market today is Asia,” says Colaninno, “the future market is Africa.”

With such a worldwide and culturally diverse customer base, understanding the consumer on both a regional and global basis is important to Piaggio. That’s why the company is now using the SAP HANA platform and predictive analytics software across the group to analyze customer and sales data to gain greater insight into consumer preferences – from color choices to favorite options.

This insight says a lot about customer loyalty.

“We want to know our customers as people, understanding in real time what they like and want in a vehicle,” adds Chiara Ugozzoli, the company’s senior vice president of global digital marketing and CRM. “The concept of loyalty today has changed. People are loyal to companies not just because they like a product. They are loyal because companies are delivering great brand experiences.”

The Future Belongs to Even Bigger Data

Data analysis is likely to play an even a larger role at Piaggio in the future. In fact, company leaders see the Internet of Things (IoT) as the next great influence on product design – particularly when it comes to rider safety.

For example, Piaggio is looking at predictive analytics as a way to maximize the use of huge amounts of data that will be generated by the on-board technologies of smarter scooters and the hyper-connected driving environments in which they’re operated.

According to Luca Sacchi, senior vice president and head of strategic innovation at Piaggio Group, this kind of data is already helping shape scooter design. And there’s a definite tie-in with rider comfort and enjoyment here.

Style Is Not Forgotten

At Piaggio, data from a variety of sources is being used to design the scooter of the 21st century. But you need not worry, the company has not forgotten about the iconic styling that helped make the Vespa so popular.

Piaggio recently released the Vespa 946 Emporio Armani, a model developed jointly with Italian fashion designer Giorgio Armani. This scooter features brown leather ascents and a special paint that combines a unique shade of grey with subtle hints of green that are only visible only under certain lighting conditions.

Maybe the Museum of Modern Art should start clearing some extra floor space.