In the previous blog, when we discuss the implementation detail of function setText of Button control, we find that every time a new value is set for text property, there is also a Model Property update operation done ( line 29711 below ).

In this blog, I will study the implementation detail of property binding for Button control. I add another five new lines of code highlighted below in the sample application. It is expected that when the button is displayed, the text for it is not the “Button” passed to Button constructor, but the value “Jerry” from model field “field_for_text“.

The aim of this blog is to figure out what has happened under the hood, when the new five lines are executed.

When this line is executed, the corresponding JavaScript file for JSONModel will be downloaded. We have already learned this “UI5 module lazy load mechanism” in the first blog.

Here for JSONModel, we can learn another chain. 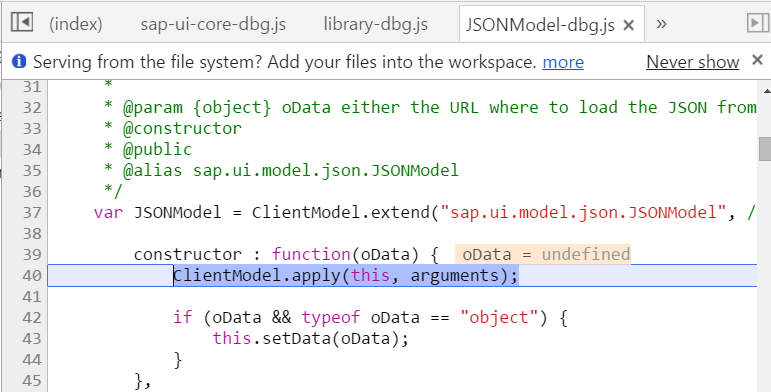 From the source code of JSONModel we can also know that our codes in the sample application regarding JSON model initialization could even be reduced.

However in order to figure out what has happened during each line execution, I keep to use the original lengthy code.

In Model’s constructor, we can find the three default Supported binding modes:

Since I have not passed any data into the JSONModel constructor, so new sap.ui.model.json.JSONModel() will only return an empty JSON Model instance.

Nothing special, just create a new object for later usage.

We don’t specify any value for parameter bMerge, so simply assign the oData passed in to this.oData ( line 66 ).

In checkUpdate, since so far the JSON model instance has no binding assigned, so it will do nothing and just return.

This line binds the JSON model instance to button instance. line 32200: so far, there is not any BindingContext to be updated, since till now we only bind the Button control as a whole to the JSON model, but never bind any Button property to JSON model field yet. The variable this.mBindingInfos in line 32067 is empty, so again the function updateBindingContext, as well as updateBindings ( line 32202 ) just return. 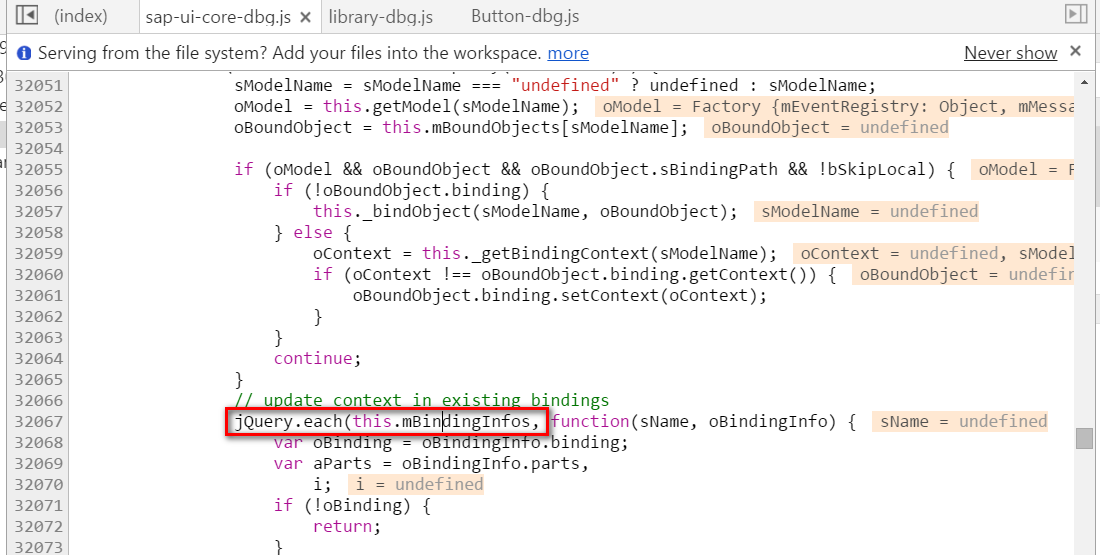 The binding information is stored in the central array this.mBindingInfos and after that _bindProperty function is called.

The main logic of control binding with JSON Model field is done in this function.

1. In line 31319, a binding instance is created by oModel.bindProperty.

2. In line 31331, the created binding instance is inserted to array aBindings.

The implementation of this function:

Here we have learned the third prototype chain:

The value for Button property “text” to be displayed in the UI, is maintained in this very JSONPropertyBinding instance and filled in the constructor of ClientPropertyBinding.

This function extracts the data from the field oData of model instance by property name.

So far, the control property binding is done. What is the status of Button control after bindProperty function is executed? Starting from control instance, we can find the value of text property to be displayed from the path oButton1.mBindingInfos.text.binding.oValue, which is filled by function _getValue we have learned in the previous step.

This is the reason why we see “Jerry” in the final rendered UI.

Very good blog! Any comment on how is Fiori evolving?