A week of SAP TechEd Las Vegas has come to a close. As the dust settles, I want to take a look back to absorb on reflect all that I learned last week.

Learn I did. Lots. Earlier this month, I had decided that I would decode what the “hype” of IoT (Internet of Things) within the SAP ecosystem was all about. And I set about this task assiduously by planning my session agenda for the week.

So let’s get down to the brass tacks.

First of all, I have a confession to make. Even though I work for SAP (12 years now), I couldn’t get it clearly why on earth SAP, the ERP behemoth was even trying its hand at the Internet of Things? True, it’s a trend that everyone is talking about but should that be a valid reason for SAP to jump on the bandwagon? (Tattoos are a trend in Indian metros, but I don’t line up to get inked, do I?) Sensors, control system circuitry, network gizmos – that’s the domain of Honeywell, Cisco, Huawei etc. right? Surely not SAP. And then, I heard arguments that IoT generates a huge amount of data from sensors, machines etc. and SAP had just the right technology platform to deal with Big Data. That somehow did not make sense, because I still couldn’t see what problem was being solved, I could only see what tool was used in creating the solution.

So I backtracked, and went to SAP TechEd, clearing my mind of all preconceived technology assumptions. An empty mind, and a 36 hour flight from Bangalore to Las Vegas.

Las Vegas welcomed me in the only way it knows to – bright lights flashing from slot machines. Hotel lobbies adjacent to huge casinos. Neon and glitz.

At TechEd, some fantastic sessions presented themselves.

A session by the Head of SAP Co-Innovation Labs showcased how 3 startups and 1 system integrator got together with SAP to build a beautiful and innovative solution for customer support. Marenco (a Swiss startup that builds helicopters) teamed up with Wikitude (another startup in the area of Augmented Reality), AllVisual AG (a consulting company that uses SAP Visual Enterprise to analyze machine parts visually) and Orianda (a system Integrator) to build an out-of-this-world support experience for its customers. Essentially, Marenco has sensor data coming out of various components of its helicopter machinery, piped into SAP’s HANA Cloud Platform (HCP) where various algorithms run to detect/predict any components not running perfectly etc. The Marenco maintenance engineer just needs to point his iPhone/iPad camera at the helicopter, and the “misbehaving”/”at risk”  components come up through beautiful augmented reality screens. SAP Visual Enterprise allows the technician to view the part needing maintenance (using 3d rotation if needed), who can then trigger a work order in the backend SAP system for that particular component. All with a few touches and finger slides on the iPad. I had to pinch myself to be reminded that I was not watching science fiction.

And how can I forget the hands-on session where we sent sensor data (temperature, humidity, GPS coordinates etc.) from a Texas Instruments gizmo via a Raspberry PI to HCP. As per the scenario, the sensor is fixed in a truck filled with fish and on its way to a port in Germany from various other parts of the country. The idea is to build an application that will show which truck’s refrigeration system might have broken down resulting in an increase of temperature greater than optimal, so the folks at the port would know exactly which trucks arrived with the “not-so-fresh” fish. Or better still, build in dynamic routing, so that a nearby truck could be diverted for a mid-journey transfer of load from the truck with the malfunctioning refrigeration.

Yet another hands-on session showed how sensor data (we increased the temperature by blowing air from our mouth on the sensor!) could be sent from the sensor via bluetooth to a Raspberry PI and then over to our HCP account in the cloud. This data could then be accessed (via an ABAP channel) by a SAP NetWeaver 740 system and trigger a rule in its BRF+ rule engine. Pretty cool if one wants to create an alert for a technician on the plant shop floor (combining with relevant SAP information) if the temperature where machines are kept goes above a threshold.

A pattern was beginning to emerge in my mind. Getting data from machines/sensors in itself is cool. And a continuous stream is sure to create large amounts of data. Which can be mined and analyzed for patterns. And displayed in beautiful dashboards. But the real value of this data is realized when it is related to the business so that “bad situations” can be avoided and “good actions” be initiated. Resulting in happy customers and profitable enterprises. This is what SAP is getting into – the glue between the shop floor and the top floor, but the glue itself has to be conforming to standards, easy to use for developers, abstract low level device management from business/functional experts and so on. And that’s what the IoT services in the SAP HANA Cloud Platform is all about. And since HCP has many other services too, one can build an “App Store” of end-to-end applications in the cloud that link the sensor world to the business world  – and solve real world problems – beautifully and elegantly.

Bam! Was that too difficult to understand? Yet, it took me the above and many other sessions – to see & believe – and understand.

And then every session I attended just added piece by piece into a beautiful IoT-enabled business jigsaw puzzle. 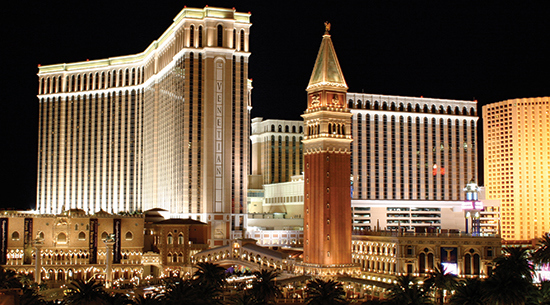 And before I knew it, I was checking out of the hotel, walking through the glitzy neon lit casinos on the way to the taxi stand, but this time I was thinking. What if the casinos had sensors attached at the various tables and slot machines, so the management could view heat maps and see where the “action” was taking place. And maybe compute some attractive offers in real time at the tables where there was less action, yet ensuring the offers were as per the risk taking model of the house. I saw a few slot machines which were broken; what if machine data could be analyzed and a slot machine be serviced before it went broke? What if the slot machine could “talk” to the nearby cafes, triggering a waitress to stop by as soon as the sensors on the buttons/levers detected sweaty palms – time for a cool drink?

I am sure the time has come for the next wave of business applications that tap into the power of the Internet of Things. And therein lies an opportunity for enterprises to offer differentiating solutions to their customers, and for innovative companies to build such solutions.

I have spent the last 3 years in the SAP Startup Focus Program working with fascinating startups that have innovation in their DNA and that built beautiful solutions on SAP’s HANA technology platform. Many of these startups have tremendous industry domain knowledge and have built mind-blowing solutions for those verticals. I am sure there exists a huge potential for building game-changing solutions by marrying IoT data to enterprise data. If you are a startup that has such an idea, I want to talk with you. Now! And help you build it with SAP’s technology stack. SAP has always wanted its customers across its 26 industries, to differentiate themselves from their competition by deploying game changing solutions powered by SAP; the time for co-innovation is now more than ever. And SAP has the technology platform and the business application stack for it.

I am waiting to hear from you at suneet.agera@sap.com

Credits: Pictures have been taken from Google Images and not taken by me.
Disclaimer: Views expressed are entirely personal.
About: Suneet Agera is a Platform Evangelist in SAP and works for the SAP Startup Focus Program as a Lead Solution Architect. He has worked in SAP in various roles including Product Management, Solution Management and Customer Support.