The SAP HANA Academy’s Tahir Hussain Babar (Bob) walks through how to upgrade a SAP HANA Vora system in a series of three videos.

All of the scripts Bob uses through out this tutorial series are available here on GitHub.

Testing the Existing System and Deleting the Zookeeper Cache 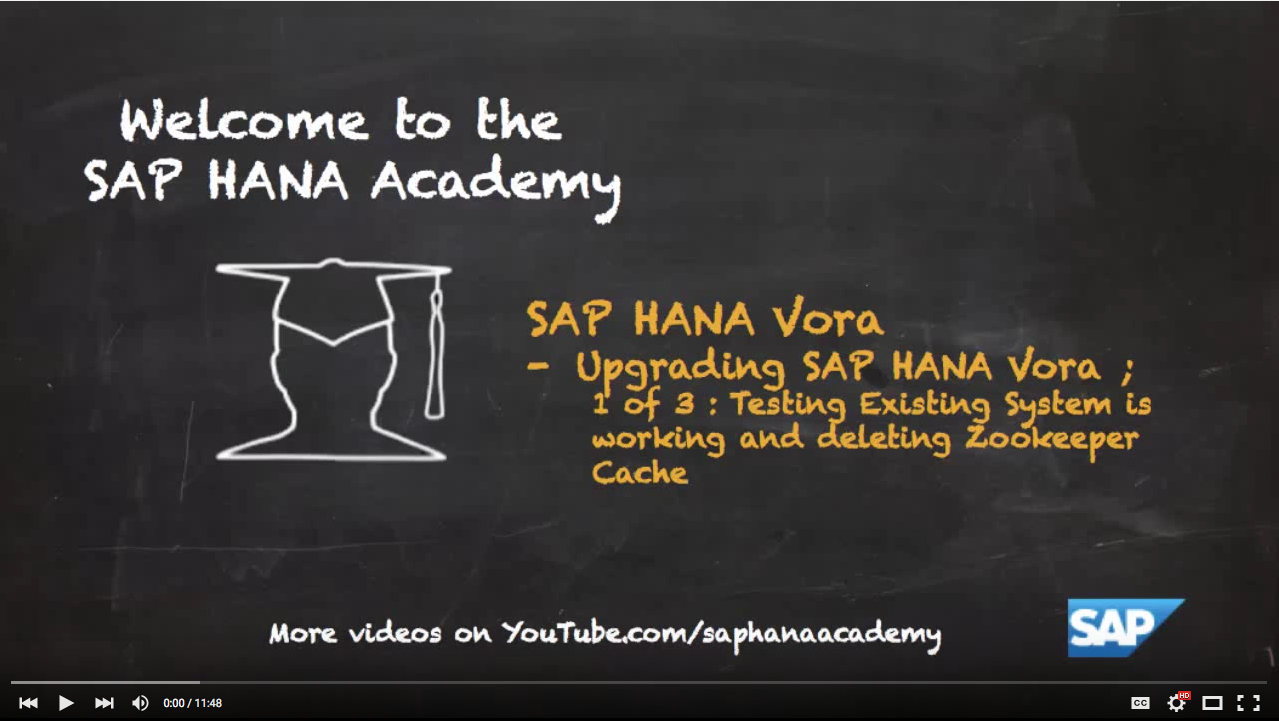 During the first video Bob shows how to test the existing SAP HANA Vora system. Bob then goes on to detail how to delete the Zookeeper client cache to ensure that any tables that were previously created are deleted.

Bob then starts Spark Shell to test the Vora add-ons to Apache Spark. First, Bob imports the SapSQLContext and then runs a script to create a table in SAP HANA Vora that points to the path of the test.csv file in HDFS. If you’re able to run a select * statement to show the table’s data then your SAP HANA Vora system is working.

When you create a table in SAP HANA Vora using the Spark Shell the tables don’t exist. Going back into a restarted Spark Shell Bob doesn’t see the table he just created. Spark Shell only creates temporary tables but the metadata of the process is kept in Zookeeper. Therefore, before upgrading SAP HANA Vora you should empty your Zookeeper client.

To accomplish this import another context called .com.sap.spark.velocity.client. This context’s name may change depending on which version of Vora you’re upgrading from. Then Bob runs the command pictured below and includes the IP address for each of the servers that are running Zookeeper. This command clears out the Zookeeper cache so the next time you run it you will have a false message returned. 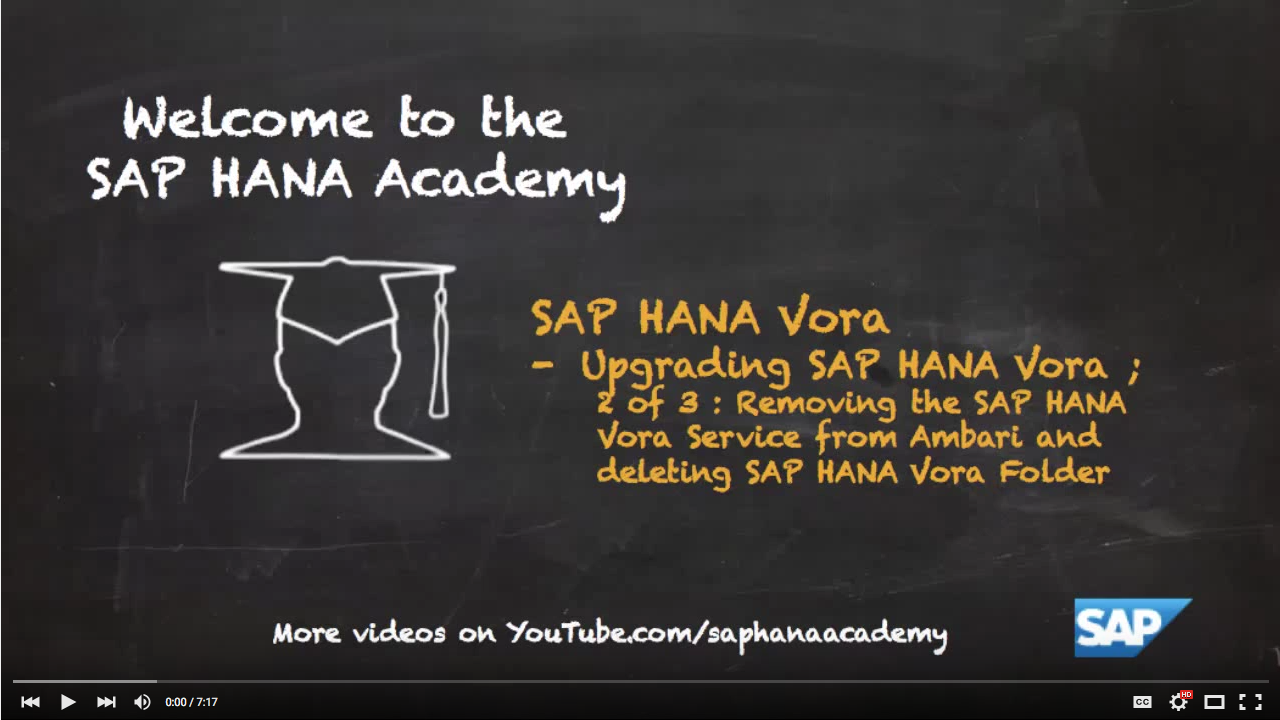 First, in Ambari Bob stops the SAP HANA Vora service. Bob then navigates to the webpage pictured below where a list of the services that are installed on his Hadoop cluster is displayed. Back in PuTTY as the Vora user Bob runs the curl command pictured below to delete the SAP HANA Vora service.

After de-installing the service, Bob restarts Ambari using the EC2 user in PuTTY. Next back in PuTTY as the Vora user, Bob navigates to the Vora folder to view the Vora extensions and then deletes the folder with a rm -r command. This removes the extensions from the Linux server.

To conclude the video, Bob as the EC2 user, uploads the upgraded Vora installation files from his dropbox. 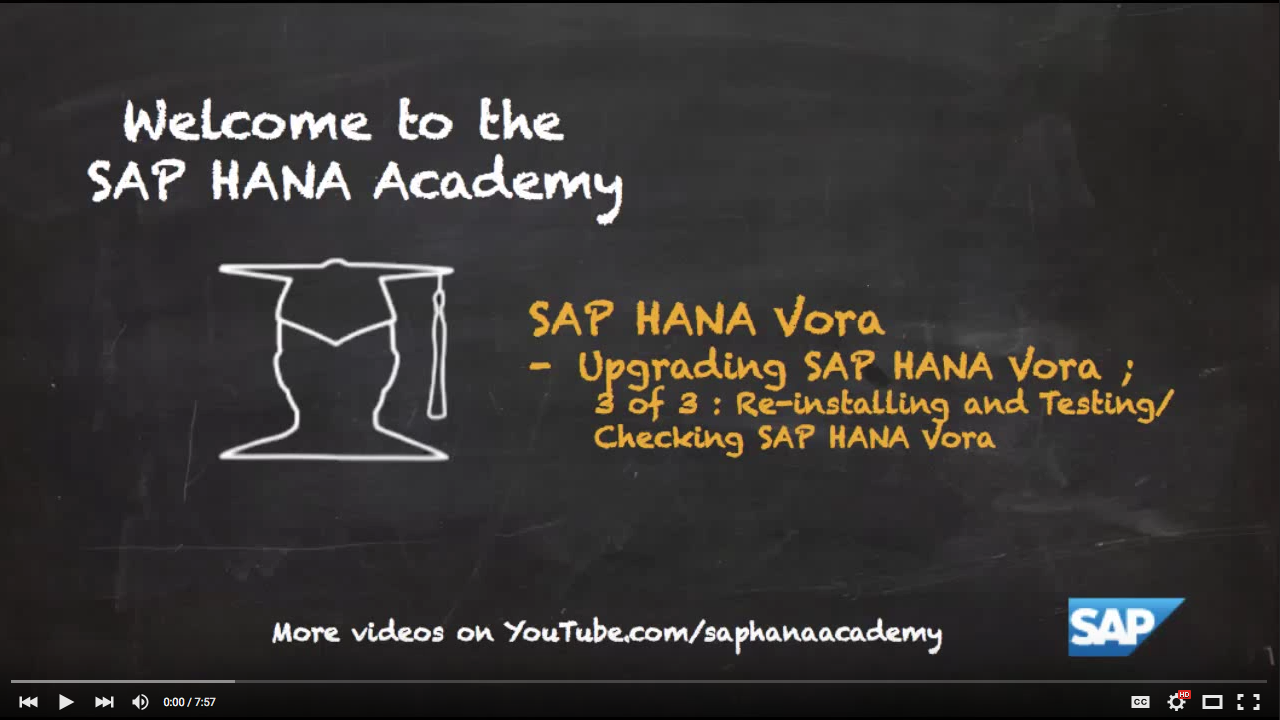 In PuTTY as the EC2 user, Bob runs the script pictured below to execute a package with the upgraded Ambari service.

Then after restarting Ambari, Bob chooses to add the new version of SAP HANA Vora as a service.

Bob keeps the default settings when following the simple steps of the add service wizard before he deploys the new SAP HANA Vora service. After, Bob starts and stops all of the Hadoop services in Ambari.

Now back in PuTTY, Bob logs in as the Vora user and installs in a newly created folder a package that contains all of the new SAP HANA Vora scripts and services. 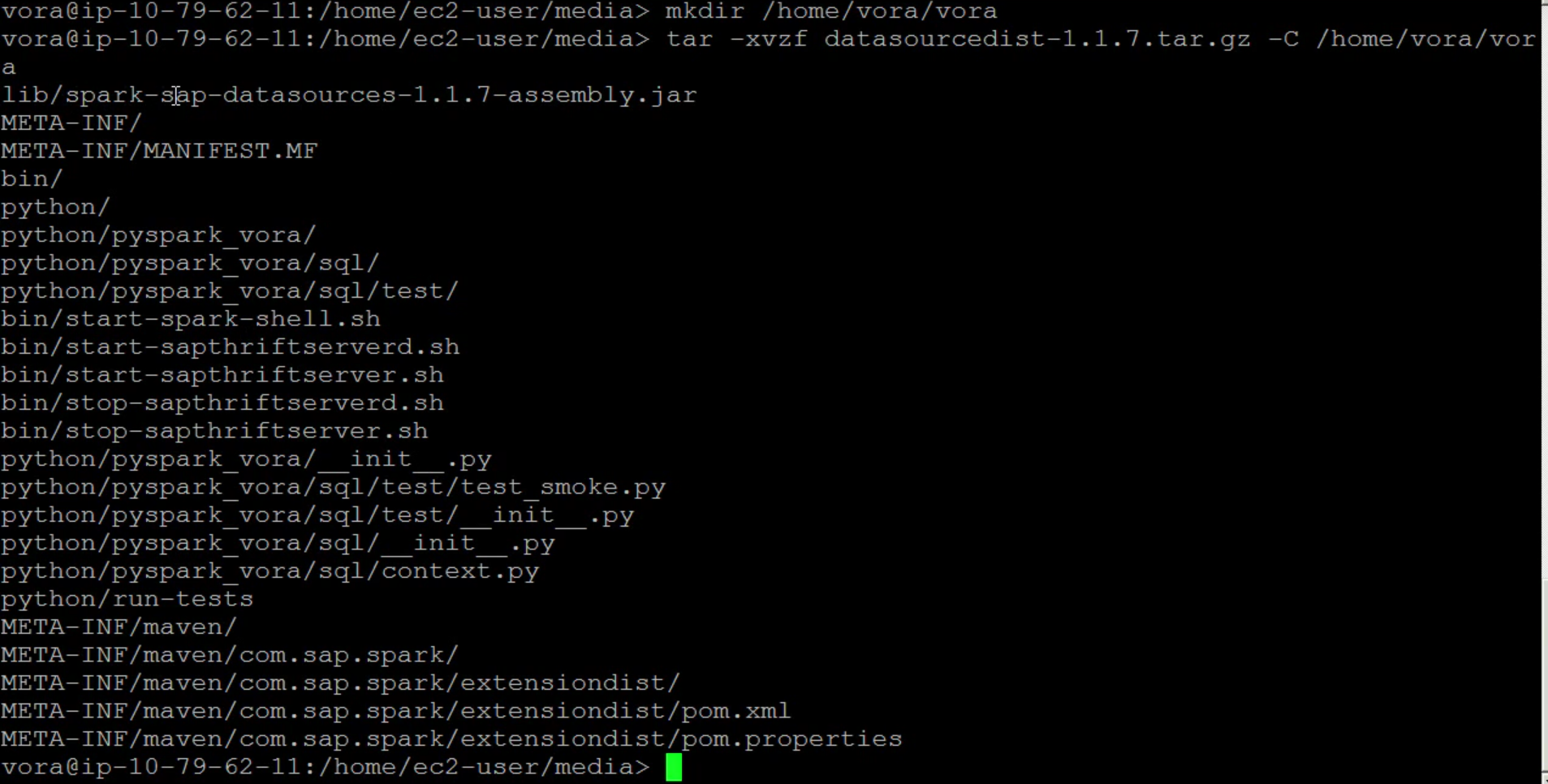 Finally Bob tests the upgraded version of SAP HANA Vora using Spark Shell. After importing the SapSQLContext and assigning it to the variable with the new version, Bob creates a table using the same script he used in the first video of this series. The table’s path points to the text.csv file from HDFS. Bob again confirms the table’s creation by viewing its data with a select * statement.

In these three videos Bob has shown how to upgrade a SAP HANA Vora system on a single node. First, Bob cleared the Zookeeper cache. Then Bob de-installed the SAP HANA Vora service from Ambari and removed the scripts that contained the Vora extensions from the Linux server. Lastly, Bob installed the upgraded version of SAP HANA Vora and tested it’s connection by creating a SAP HANA Vora table in Spark Shell.

there are 49 youtube videos if i'm not mistaken, but after seeing about half of them i still haven't come across anything about the economics of managing multiple AWS HANA VORA Hadoop instances or enterprise data (like POs, invoices, sales orders, etc.) coming from different ERP systems and going into reporting dashboards.

is this something we would see towards the end of the series?

Thanks for reading the blogs and watching the videos in the Vora series!

Yes this is something you should expect to see in the coming weeks as we wrap up the series. Please be on the lookout for videos that detail how to use multiple AWS HANA Vora Hadoop instances and on using enterprise data from various ERP systems. Bob is currently creating more SAP HANA Vora tutorials to address these and other scenarios.