As a Fiori developer it is essential to not only learn how to use a given Fiori control provided by UI5 control library, but also understand how the control orchestrates with UI5 runtime under the hood, which makes us more calm when we deal with control issues.  In the series of the tutorial I just use the button control ( sap.ui.commons.Button ) as example to demonstrate my self-study approach. If you have better one, please kindly share with me.

My favorite study approach is, as always, debugging. The first task is to identify what needs to be debugged. If you choose a complex Fiori application with a tons of control and the button is just one among them, you can easily get lost during the debugging. My preferred style is to create a most simple Fiori application containing exactly the only button control.

Prerequisite for you to perform the exercises this tutorial

You have to switch on UI5 debug mode via combination key “shift+alt+ctrl+p”, in order to expected files downloaded from Chrome network tab:

“In productive use, for performance reasons, all controls of a library are also available in the library-preload.json file, which is loaded initially (and can be loaded asynchronously). It contains each control/module as a string, which is then parsed into JavaScript on demand. So this avoids many HTTP requests and thus improves performance.”

Step1 – create a sample application with only one button control

You can find the source code how to create a button and register press event handling from this link .

I just embedded the code into an html page so the final page for debugging is listed below:

Step2 – Find out what needs to look into: Button-dbg.js & ButtonRenderer-dbg.js

Run this simple application in your webserver and you see Button as expected. In development tool, Sources tab, you see lots of js and css files are loaded by framework automatically. To be exact, they are loaded by sap-ui-core-dbg.js if you switched on debugger mode. 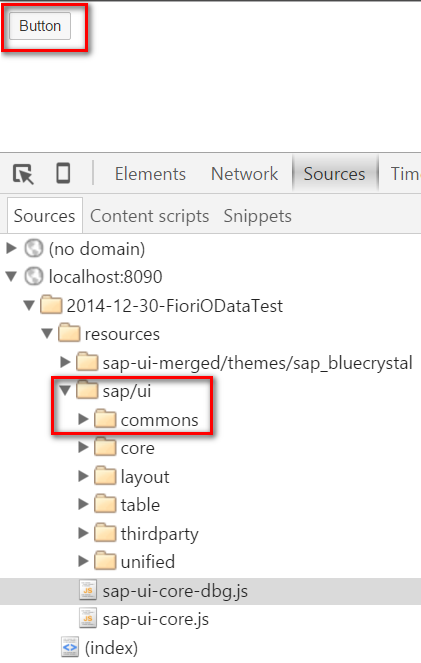 Back to our aim, we need to look into the two files related to button control: Button-dbg.js and ButtonRenderer-dbg.js. 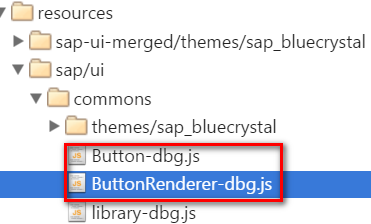 Switch to Network tab, the download of these two fields are triggered by line 11 in our own html and then the call is delegated to UI5 framework code.

Set a breakpoint in line 11 and re-launch the application. Breakpoint is triggered.

Step3 – figure out the logic of Modules in UI5

From the code below we can understand the UI5 framework uses a lazy load working style: the corresponding js file for a given control is never initially loaded until the control is really used in the code ( or explicitly required by “jQuery.sap.require(“XXXX”)” ).

After the corresponding js file for a required control is loaded, it will be executed and the output is a js object, we call it a “module”. All modules are centrally maintained in the array mModules as listed below. Each module has a state field with possible status INITIAL, LOADED, READY, FAILED, PRELOADED. In my example, since the button control is required for the first time, so the module has status INITIAL.

– Line 16517: determine whether we need to load the normal version of js, or the debug version. The flag for debug mode is stored via the field sap-ui-loaddbg in global object window.

– Line 16520: get url of module converted from module name

This is an synchronous AJAX call ( async = false ). In its success handler, the module state is changed to LOADED, according with the module data filled. Now the execModule is called in line 16543. 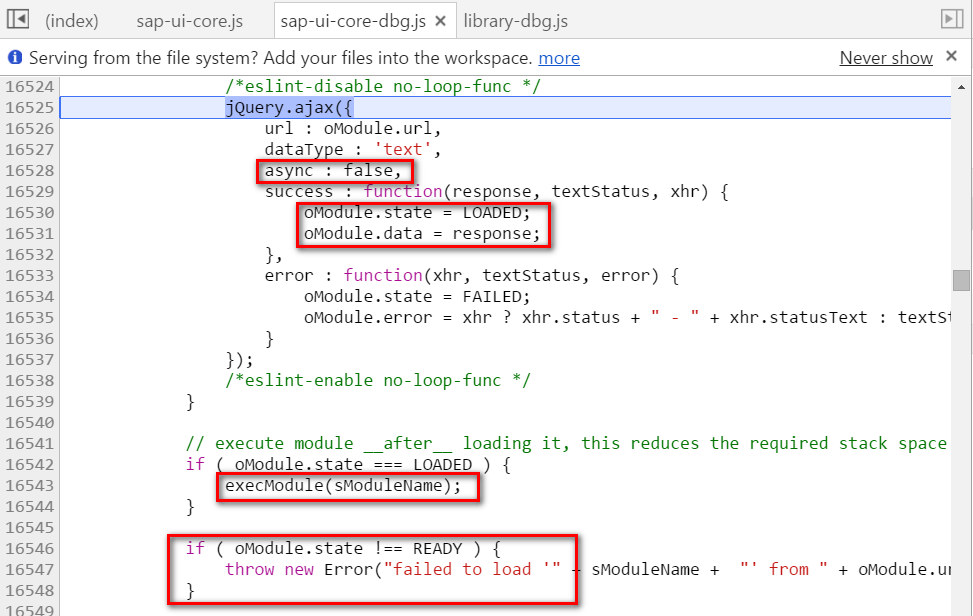 The source code of Button.js is passed in to the native function, eval(), of window object.

After requireModule is executed, button module is ready for use ( state = 4 – READY ).

Step4 – how the button instance is created

Basically speaking the button instance is first created via factory method newObject as a template and then enriched with the user settings passed via arguments object.

Check the source code of Button.js, we can find one line:

It unveils the fact that the Button is an extension of Control, or let’s borrow the OO concept, it “inherits” from Control class.

Also Control is an extension of Element:

And Element is an extension of ManagedObject:

The root of this long prototype chain is Metadata.

As a result the constructor of each node in the prototype chain will be called, one nested by one, when the leaf node in the chain, Button, is initialized.

The inheritance relationship from chain root to leaf is:

Just compare the classic OO language like JAVA and C++, the mechanism here is logically the same. For the Button itself, it gains most of common features which other controls have as well, with the help of this prototype chain. Then the Button control only needs to implement its specific features which are different with other controls ( for example, to deal with mouse and keyboard event ).

If you would like to know technically how prototype chain is built, please read this blog: Understand extend function in Component.js in Fiori application.

In next part we will analyze how a button is rendered in Fiori UI.

Can you update the dead link.(Under Step one)

I can open that link in my laptop: 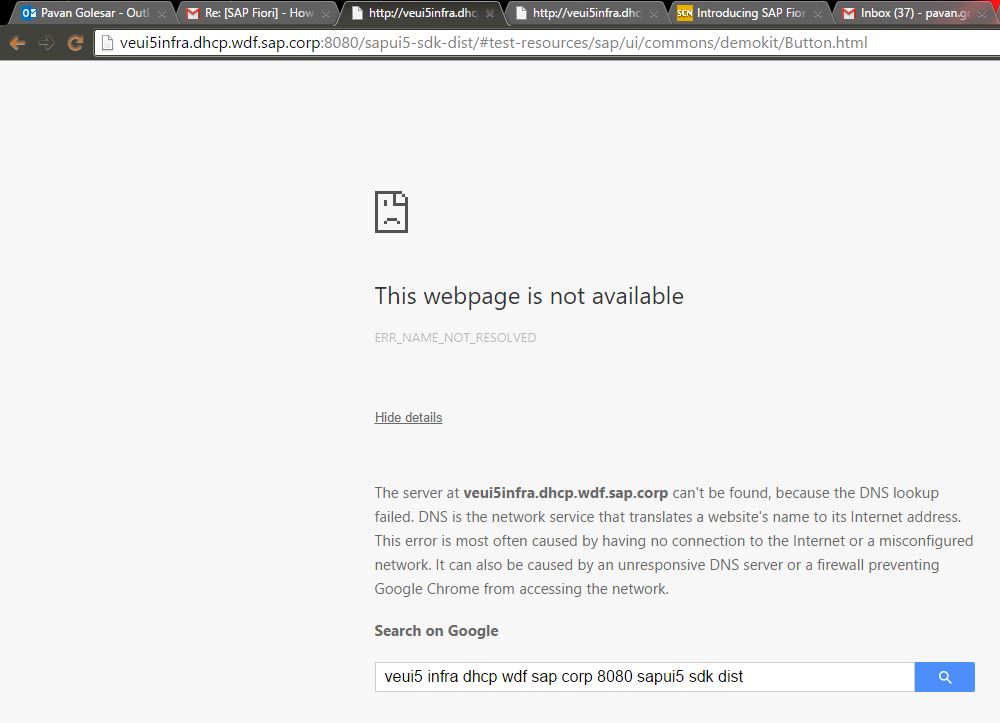 I also couldn't open this link.

May be this link will fit: SAPUI5 SDK - Demo Kit

Thanks a lot for your comment. I have made adaptation. Perhaps I use an internal link which is only accessible for SAP employee previously.

Thanks Jerry, Its now working fine. 🙂

Thanks for your detailed description. I'd just like to add that this synchronous loading of single controls only happens in debug mode.

In productive use, for performance reasons, all controls of a library are also available in the library-preload.json file, which is loaded initially (and can be loaded asynchronously). It contains each control/module as a string, which is then parsed into JavaScript on demand. So this avoids many HTTP requests and thus improves performance.

Thanks a lot for your kind comment. ( and also your reply about my question regarding "component-preload.js" some days ago 🙂 ). I have added your comment in the beginning of this blog to avoid the situation that some SCNs might be confused when they failed to see the expected files in Chrome network tab if they didn't switch on debugging mode.

I just read through your blog series. I really like it how you learned about the internals of UI5 by debugging and then also invested the effort to explain this publicly! I have added some comments here and there to extend upon your explanation, but everything you wrote looked good to me.

Thanks a lot for your comment! I did have concerns before I began to write this tutorial, that is, I am trying to write content which are beyond my team's scope ( I am a CRM Fiori developer building applications using UI5 ). If there is something wrong in the content, I would be challenged by framework experts.

Nevertheless, the reason I persuade myself to write them out, besides the one I stated in the beginning of this blog, is that recently there are several new colleagues joined our team and they are also very interested with UI5 implementation. They wanted to learn the code but feel frustrated after some attempts, complaining that they get lost in the tons of framework code. Then I just share with them my personal experience, that is, always start learning with stuff you are already a little bit familiar, with a clear goal. Then comes this tutorial.

I will adapt the blog based on your complement accordingly. Thanks a lot again!

Regarding to how the lazy require works:  in Core-dbg.js, the lazy loading stubs are created for all controls. That's why the constructor is the stub in the first time.