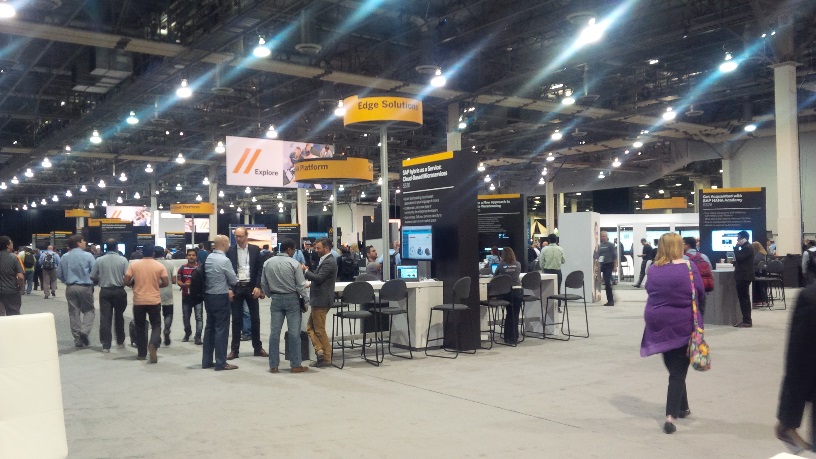 Wednesday turned out to be quite a productive day here at TechEd. It started bright and early with the session DMM106 ‘Introduction to SAP SQL Anywhere’. I had no clue SAP SQL Anywhere existed until I saw the TechEd agenda few weeks earlier, so this definitely goes with the “exploration” theme this year. Had an extra cup of coffee and was prepared to sneak out in the middle, but surprisingly Jose Ramos from SAP kept the lively session flow and made the information quite simple to understand even for non-experts like myself. Well done.

After that I was planning to hunt for free stuff on the show floor, but it turned out it did not open for another hour. Luckily, I hit the ‘On now’ button in the mobile app and realized that Steve Rumsby‘s  session UX118 was starting in a few minutes. Even though we’ve already seen quite a few Personas demos at the ASUG meetings, I took this as a sign that I had to provide mentorly support for Steve. The session was surprisingly not crowded. Perhaps the title ‘SAP Screen Personas Version 2 to 3′ did a bit of disservice here – even my first thought was: “we have not implemented Personas yet, so why would I care about migration from 2 to 3”. But at the end I learned quite a bit about Personas in general. If the session was titled (more accurately) ‘Fantastic Mr. Rumsby talks about SAP Personas that you can get for free today’ then I bet people would line up in the hall for it.

The next session MOB104 on the wearable technology sounded totally cutting edge until I realized it was in large part about the SAP ‘AR Warehouse Picker’ and ‘AR Service Technician’ apps (or solutions?). They were first mentioned on SCN in June 2013, then again in September 2014. So it’s not even yesterdays news. What progress SAP made in that time? Well, looks like they are thinking about making other warehouse processes, like put-away and inventory, available as well. Sometime around 2017, I guess. Pascal Lessard‘s presentation skills were quite good and it was not a bad session overall, but just not as exciting as I’d hoped. The same session should be in Barcelona (different presenter), maybe SAP will kick it up a notch then, who knows.

SEC108 (‘How Pratt & Whitney Streamlined Their ABAP Security Code Review Process’) was one of the few ASUG customer sessions with ABAP in the title, so I had high hopes for it as well. However, when the first slide opened there was a prominent Virtual Forge logo on the screen. Ugh.. It’s not that it’s a bad solution (even SAP is using it), but there must be some kind of disclosure for this in the title or description. Totally filing this one under the false advertisement. 🙁

After that it’s finally the free stuff hunting and gathering time. Among the bounty of pens and sunglasses the Cutest Swag of the Day title goes to the rhino from the good folks at the EPI-USE booth: 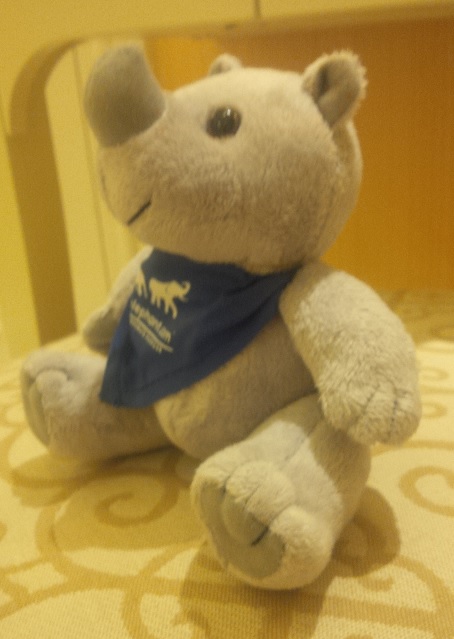 Not sure why a toy rhino is wearing the ‘elephant group’ bandanna, but hey, I’ll take it. By the way, years ago an EPI-USE rep had a demo in our office and brought some stuffed animals for our team. I got a giraffe that later became my son’s favorite sleeping companion for years. I always try to bring souvenirs for my colleagues from the SAP events (after all, they are holding the fort while I’m away) and while some items frequently go unclaimed, no one has ever said “no, thanks” to a stuffed animal. Definitely something to consider for the marketing departments out there.

On the show floor I also run into Thorsten Franz himself and we have a lovely conversation about new features in ABAP 7.4 and how there should be more stuff for ABAPers at TechEd. In the process we got filmed, I think, so be on the lookout for our faces in the promotional SAP videos.

After that I rushed to the TEC125 session (‘How ABAP Push Channels Help with Orders and Deliveries at a Concrete Co.’) by Paul Hardy and was shocked to find many seats available. What is wrong with you, people?! What session could possibly be more important? SAP roadmap? It will change 10 times over before the quarter ends, c’mon… Anyway, it’s their loss because personally I found it thoroughly enjoyable. And short on top of that (Paul is clearly familiar with the Latvian saying about the songs 🙂 ). 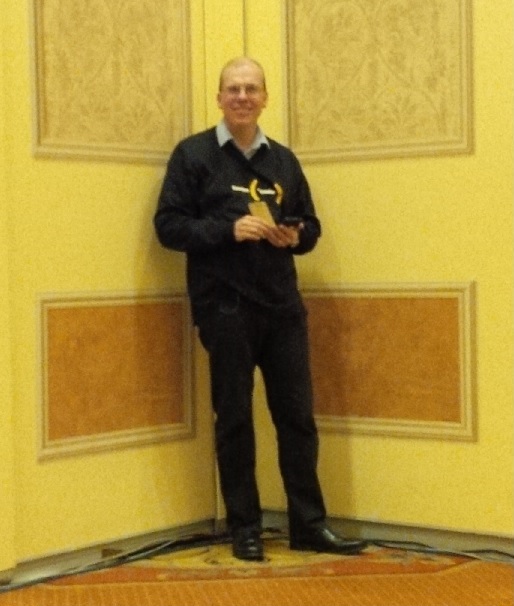 The last session of the day BA109 (‘Performance Analytics for Order-to-Cash Processes in SAP S/4HANA’) I picked out of sheer curiosity. The content was way over my head, but I found it amazing that Peter McNulty was the only speaker ever in the history of SAP events to actually stop at the Disclaimer slide and say a few words about it. Got to respect such attention to detail!

The day ended with the networking reception where I got to have a free dinner network with some random attendees and hear the Fiori Jam band (that included some of our multi-talented Mentors). By the way, food at TechEd is abundant and really good. For example – this was our dessert today: 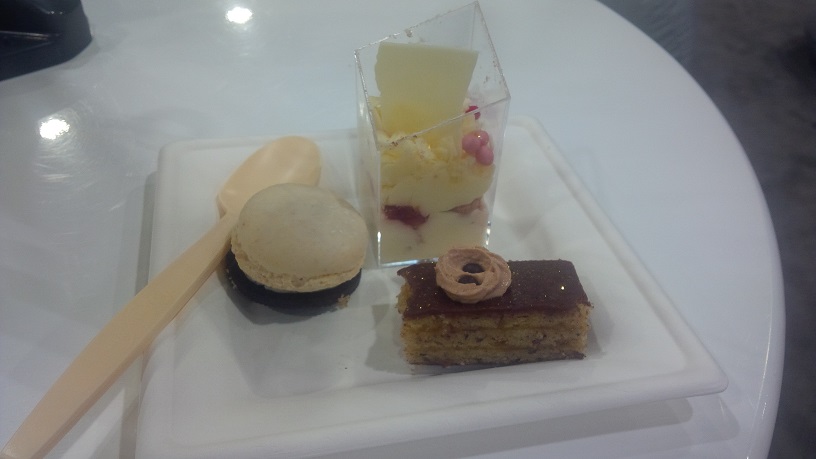 Actually I’m quite glad Paul Hardy is here in person, so I don’t have to write the food reviews for him this time. 😉

On this sweet note I leave you till tomorrow – the last TechEd day is coming up.

P.S. Still no sight of the poster with my picture. So far I found Tammy Powlas and Gareth Ryan posters, but could not take a picture because some people were hanging around them. Will look some more tomorrow.

Thank you for the kind words. I'm running the same session in Barcelona in a few weeks. It is, unfortunately, too late to change the title, but if anyone is going to be there and is thinking "I don't run Personas 2, I'll skip that one" maybe you could take Jelena's advice and think again?

I'll bear this in mind when titling future presentations. I had to come up with this title in something of a hurry, so I didn't give it as much consideration as it deserved. Consider my wrists slapped 🙂

"I Met the Fantastic Mr Rumsby and Mr Hardy in Las Vegas and All I Got Was This Cute Stuffed Toy.... or, How to Own the Conference with Stealth Presentations of Superior Value..."

Mister Hardy looks like he was driven into a corner, so that this photo could be taken. 😀 Like trying to get evidence that you have actually seen a specimen of a rare species. *g*

The plushy rhino is very cute, but let me conclude my comment with "OMNOMNOM!"

Lol, Steffi! I should stress that Paul Hardy (hopefully I got the right one out of 4 this time) was standing in the corner completely voluntarily before his session. 🙂

Thanks for the updates! It was nice to see you though we didn't have time to really chat.....but now I can read what you were up to all along. haha

Hi Jelena - thank you for the shout-out!  I'm glad you enjoyed the lecture on SQL Anywhere and hope you found it informative.  If you're going to the Barcelona event, I hope to see you there.