I have very good news for you: We reached the next big milestone for the application server ABAP. The new version 7.50 was launched. You can find a very good summary about the key features in the blog post:  SAP NetWeaver AS for ABAP 7.5  – One ABAP Platform for SAP Business Suite and SAP S/4HANA, on-premise edition

Based on this version we also provide you a new version of the ABAP develoment tools for eclipse. This version is available on our Eclipse Updatesite: SAP Development Tools for Eclipse

ADT version 2.51 contains a bunch of new features that I will present to you in the following sections of this blog:

The CDS view building is available in eclipse since a couple of releases. But what about the other dictionary editors in eclipse?

So we thought about it and came to the conclusion that it is a good idea to provide these tools now also in eclipse. With ADT 251 an editor for data elements and dictionary structures are available for you. The others will follow in upcoming releases.

The editor for data structures is source-based. That means we defined a new syntax for structures based on the CDS specification: 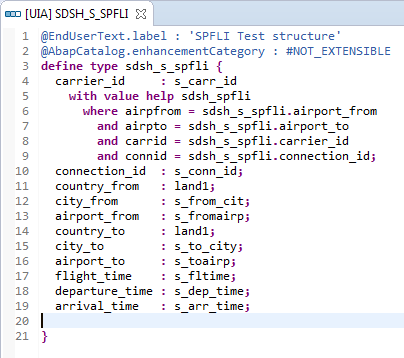 You have all the benefits of source code editors like:

Very important to know: The persistency on the ABAP in the dictionary is the same as in SE11. That means you can edit the same structure with SE11 and eclipse in parallel. There is no migration into the new format needed because the source is created on the fly when opening a structure in eclipse. You can find more details about the new structure editor in this blog post:

For data elements we followed a form-based approach similar to SE11: 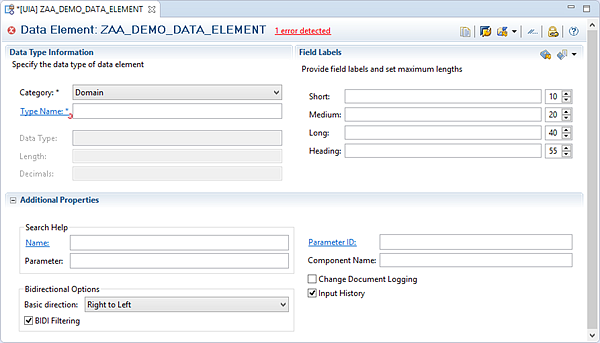 Please find all the details about the new data element editor in this blog post:Editing Data Elements in a Form-Based Way

According to our users the quick fixes are one of the most important features when developing with ABAP in Eclipse.

In the new ADT version there are some new quick fixes available in the area of the exception handling. You know the situation when using frameworks like the ALV for example. You are calling a lot of methods of the framework in your code and at the end the editors says to you that you have missed to catch some exceptions that might occur during runtime.

A tedious job starts now to find the possible exceptions and declare them in a Try/Catch clause. STOP, this is not needed anymore. Just use the new quick fix ‘Surround with Try/Catch’ and you save a lot of time.

Here is how it works:

Try it out. It is really cool !

Another quick fix that was often mentioned in SCN is the possibility to create getter and setter methods.

Here is how it works with eclipse. Just click CTRL-1 on an attribute in your class and choose the option “Generate Getter and Setter” : 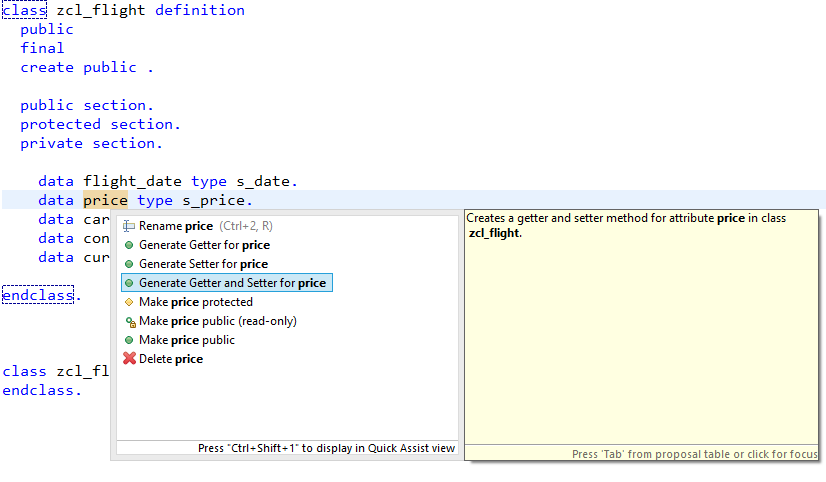 The editor automatically adds the new method declarations and implementations of the methods to the class.

That is really quick, isn’t it ?

ABAP Doc offers you a powerful tool for documenting your source code. You just use the same editor for documentation and for coding. A comprehensive overview about the idea and the features are described in the blog post: ABAP Doc

We got a lot of feedback in the meanwhile concerning the concept. One topic was the relation between ABAP Doc comments and the short texts entered in the ABAP Workbench. The second topic was the generation of offline HTML files for the documentation.

Both topics are solved now with ABAP 7.50:

News from the Property View

Did you ever try to change a function module to a remote-enabled function module in eclipse? For this, you needed to open the SAP GUI. From now on, you can edit these object type specific properties, such as the processing type directly in ADT. You will find a new tab called ‘Specific’ in the eclipse property view. For some of the properties we also offer you nice value help for your convenience:

Have you ever tried to move a development object from one package to another one? In the past this was only possible via the workaround in the SAP GUI. Now we have integrated this nice little helper natively in eclipse. In the Project Explorer, just open the context menu on an object and choose Change Package Assignment:

In the subsequent dialog, enter the name of the package where you want to move the object to. If you want to see a list with the available target packages, only choose Ctrl-Space for opening the content assist. 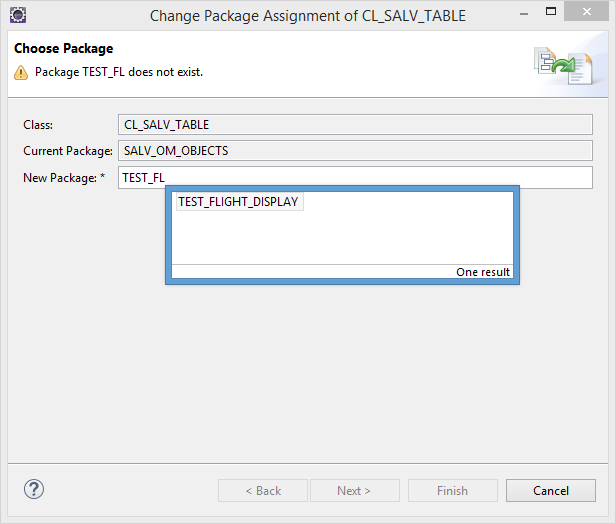 After clicking Finish the assignment to the new package will be created.

Working with classes in eclipse was sometimes a big hurdle when several developers work in parallel on a class and want to store their changes on different transport requests. This was not possible so far. Only one request can be chosen per class. This limitation is now gone with ABAP 7.50. The behavior is now similar to the ABAP workbench.

Simple transformations and XSLT are helpful friends when working with XML documents in ABAP. We also use them heavily in the ADT framework to transfer the data from the ABAP backend to the eclipse client. With the new ADT version you can edit the transformations now also in eclipse. Good luck for us: we could reuse the standard XML editor from eclipse.

See the following blog post to find all the details about the new editor in eclipse:

News from the Debugger

Also in the area of the ABAP debugger in Eclipse we did some major improvements with the new ABAP version 7.50.

One of the top prio features on the wishlist of our users weas the possibility to create conditional breakpoints. And here they are.

Another breakpoint type are the so called soft breakpoints. These breakpoints are only valid in the current debug session. Please find the details in this blog: Soft Breakpoints

A very important round-off in the debugger is the possibility to trigger database commit and rollback during debugging and the possibility to debug update tasks. Here we go with AS ABAP 7.50: Execute Commit/Rollback Work on Database / Update Debugging .

Since AS ABAP 7.40 SP05 with HANA it is possibe to program stored procedures in ABAP. It is very easy because you just develop a method of an ABAP class with SQL script instead of the ABAP language. You don’t have to fear the lifecycle issues anymore that we had in the past with SQL Script procedures developed directly in HANA. Unfortunately the debugging of the AMDP methods was not so easy in the past. This isue is gone now. With AS ABAP 7.50 we introduced sql script debugging natively in the ABAP eclipse debugger. See the blog post about AMDP Debugging to figure out all the details: How to debug ABAP Managed Database Procedures using ADT – Basics

The ABAP trace tool in eclipse with its new visualization capabilities is in the meanwhile a very famous troubleshooting tool for the ABAP developer community. If you missed that train so far you may refresh your knowledge in that overview document: http://scn.sap.com/docs/DOC-41223

Static logpoints are present in ABAP since quite a long time with the ABAP statement LOG-POINT. The disadvantage is that all logging capabilities of the system needs to be foreseen already by the developer at designtime. With dynamic logpoints you now have a new powerful tool in your hand. This is really a highlight of the new ABAP version 7.50. Give it a try and read the details how to set these new logpoints in the blog post: Dynamic Logpoints in ABAP

We now provide a native eclipse editor for Web Dynpro components and applications with AS ABAP 7.50. Find more information in the blog: Web Dynpro ABAP Component and Application Editor

SQL Monitor for ABAP in Eclipse

The SQL monitor is a very powerful tool to optimize the migration efforts for Suite on HANA and S/4 HANA. But what we missed was the developer support for it in eclipse. This gap is now closed with AS ABAP 7.50. Please find a detailed description how to use the SQL monitor in Eclipse to find performance hotspots in your code:  3 Simple Steps to Identify Performance Hotspots in ABAP Custom Code

News from the CDS Editor

CDS (Core Data Services) is the new modelling language in ABAP. With the new ABAP version 7.50 we support a lot of new cool features. Find all the news of the Editor in the blog post: New ABAP CDS Tools in SAP NetWeaver AS ABAP 7.5

Especially the graphical viewer for CDS models is very helpful when dealing with complex models:

Woh, a lot of new stuff. Hope you like it and have fun.