If you are an ABAP developer and the terms ABAP for HANA, code push down or database procedures sound interesting for you, then you may have already heard about ABAP Managed Database Procedures (AMDP). This article shortly repeats what AMDP is and explains how to debug AMDP procedures using the new AMDP Debugger – which is now part of the ABAP Development Tools (ADT).

The goal of ABAP Managed Database Procedures is to make the world of database procedures available for ABAP Developers. In order to achieve this, AMDP offers a way to create, edit and transport database procedures nearly like standard ABAP classes. With the new AMDP Debugger there is now also debugging support directly integrated in the ABAP tool environment.

Example for an AMDP procedure: 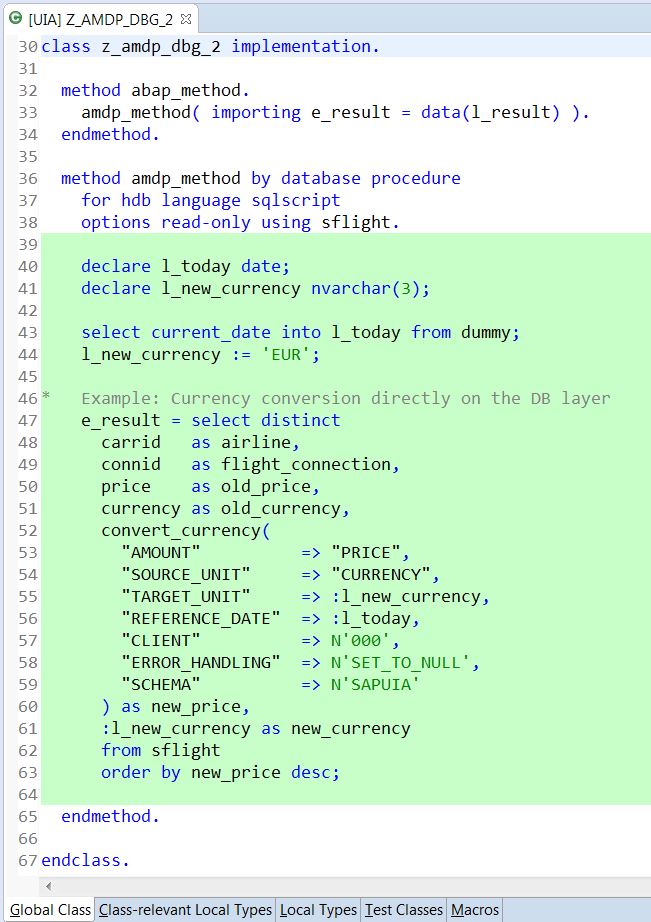 A single AMDP procedure is implemented as an AMDP method and its content is written in a database-specific language like SQLScript. One or more AMDP methods are part of an AMDP class that looks almost like a usual ABAP class. The AMDP methods can be directly called from ABAP in the same way as normal ABAP methods.

During activation of such an AMDP class for every AMDP method one DB procedure is generated on the DB layer. During runtime (when an AMDP method is called from ABAP) the corresponding generated database procedure is executed. For the importing and exporting parameters there is an implicit automatic type mapping.

About the AMDP Debugger

Technical Prerequisites for the AMDP Debugger

To go along with the AMDP concept there is no need for a database user or additional authorizations. You only need your ABAP user with the standard ABAP debug authorization to be able to use the AMDP Debugger.

ABAP programs and database procedures are executed in different environments during runtime:

Since AMDP procedures are directly called from ABAP it was one of the main goals of the AMDP Debugger to offer a smooth transition from ABAP debugging to AMDP debugging and vice versa. Nevertheless it’s still good to keep in mind that there are two different runtime environments / debuggers involved when working with AMDP.

One difference between AMDP Debugger and ABAP Debugger is the fact that the AMDP Debugger has to be started before you can do anything else. If the debugger has not been started your DB procedures will not stop at breakpoints. To deal with this we implemented an automatism within ADT to start the debugger implicitly when a user creates a breakpoint for an AMDP.

Stopping the AMDP Debugger after usage is also important because it is rather resource intensive for the ABAP Server and it’s not affordable to have an active debugger instance for every user in the system all the time. For this reason there are two automatisms to stop the debugger implicitly:

Besides this the user always has the possibility to start or stop the AMDP Debugger manually. This is for example necessary when you re-open your IDE after closing it and try to start a debug session with your old breakpoints instead of creating new ones.

Since the current activation state of the AMDP Debugger is quite important it is also reflected by the color of the breakpoints:

Breakpoints are usually only for a very short time blue / pending, often you won’t recognize that state at all.

How to use the AMDP Debugger – Demo

In order to keep the demo simple I used strongly simplified example code, so don’t be irritated by the fact that the result of the AMDP could also be retrieved by a single line of Open SQL.

As last part of this article you can find here the lists of currently supported features and restrictions (10/2015):

The second part of this article is probably only relevant for you if you actually work with AMDP or plan to do so in the near future. If you only want to get an overview the first part should be sufficient.

Part 2: How to debug ABAP Managed Database Procedures with ADT – Details and Tips

As simple as it can be 🙂 Good one.

Thank you for this guide. We are on 7.4 SP14. I have successfully debugged a procedure which is directly created on HANA DB. After that I have changed the procedure to AMDP. Now I can't debug it anymore because I'm getting a dump in ABAP:

"transaction rolled back by an internal error: exception 70000000: The

restart your statement in order to debug them.#"

I have tried it several times now but there is no difference in the behaviour. Is it really necessary to have 7.5 for using AMDP debugging? Another error message would be better in this case.

The different debuggers can be confusing and I tried to explain a bit about the differences in the second part of the blog How to debug ABAP Managed Database Procedures using ADT - Details and Tips (Section "Differences to other DB procedure debuggers").

I will try to answer your question in the other blog that is more suitable: Tutorial: How to Debug an ABAP Managed Database Procedure

ok, I think I have got it now. AMDP Debugger does mean to set the breakpoints in the ABAP Code and not in the generated AMDP Procedures. If I try the first alternative I'm getting this message:

And this is what is working with 7.5.

The alternative is to debug the procedure which is created by AMDP byself.

I try to debug an AMDP in a BW Transformation Expert Routine. But when I start the related DTP (Background and Dialog), the debugger is not invoked (although it is started in HANA Studio Debug perspective). We are on 7.5 SP04, HANA 1.0 SP12 Rev 2.
Do you have any ideas?

1) Did you create the breakpoint directly in the AMDP class (the ABAP class that contains the SQLScript as embedded code) or rather in the generated SQLScript procedure itself? The debugger instance in the debug view should show the name "AMDP Debugger".

3) Are you 100% sure the code is really executed? This is actually quite often the reason that the debugger is not invoked and this also happens to the most experienced developers.

4) If you started with a Hello World program and you used the option "read-only" make sure the procedure is returning some values. Otherwise it might be detected as useless and is not executed at all.