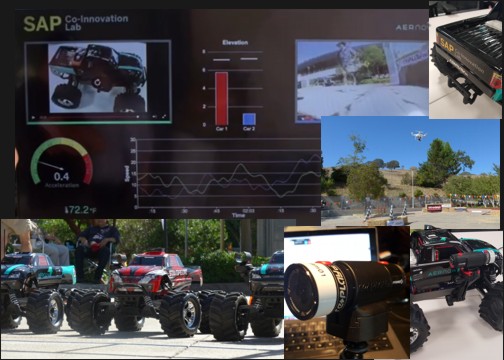 It’s not often that I get time during a TechEd event to crank out a blog post but I’m excited to share a new video demo COIL has produced describing an exceptionally cool co-innovation project between SAP and AerNow.  COIL worked with AerNow to replicate a Super Sport Truck race in the parking lot behind building one in Palo Alto. There may have been easier ways to collect streaming video and meta data when it comes to work done in a lab, but COIL is a lab designed to replicate the real world. Doing so is a strong blend of capability and creativity infused with the right amount of risk taking in order to capture authenticity and indisputable evidence of turning an idea into something with tangible value

The SAP Co-Innovation Lab (COIL) in Silicon Valley, brings SAP and AerNow together to leverage select SAP technologies and platforms to enable and scale what it describes as delivering a glass-to-glass experience. The project work includes the capture of IoT sensors and video data that is then streamed into the AerNow cloud ecosystem. Central to this is the HANA Cloud Platform (HCP) where the meta data gets analyzed and reported back out into the stream to an end user device.

This short video vividly portrays the co-innovation experience and shares the project team’s approach to collect this data in real time by replicating an actual sport truck race event using Remote Control 4WD trucks fitted with cameras and sensors to capture and stream data in and out of the cloud. Many can pursue a simple proof of concept to demonstrate collecting data from a sensor and using this data to inform, but this effort includes what it takes to do something with hundreds  or thousands of sensors collecting and streaming data into and out of  a robust and complex data architecture and cloud ecosystem where performance, efficiency, reliability and scalability all factor in order the achieve the desired experience by an end user.

As you watch the video three things should become apparent. One is that what you see is but a single use case representative of a solution not just of interest to motor sports, but more broadly to the entire sports and entertainment industry. Second, while AerNow claims strong roots and continues to bring leadership to the world of motor sports, its ability to bring converged sensor data, video and other capabilities together and delver from its ecosystem has massive game changing potential for hundreds of industries. It is without question a data company. Third, its partnership with SAP as both a data leader and capable of driving and delivery of complete digital transformation is precisely why the phrase “Run Simple” is not a tag line but an outcome of the art of the possible becoming reality.