Winning the Red Dot Award: Inspire a Team to do Great Things

When SAP Fiori 2.0 won the prestigious Red Dot Award for design excellence, it was truly a dream come true. The Red Dot Design Award is one of the most widely recognized professional design competitions worldwide, and SAP was presented with the top award in the fiercely competitive “design concept” discipline.

But just as remarkable as winning the award was the teamwork that went into creating the award entry. SAP’s entry – one of 4,680 from 61 countries – was a video conveying the next step for SAP Fiori design concept through the eyes of a sales representative. Viewers can see the system and interactions of the user experience as the sales rep completes a sales order, prioritizes her daily work and overcomes typical barriers and interruptions through intelligent, automated workflows that connect everyone in the value chain. 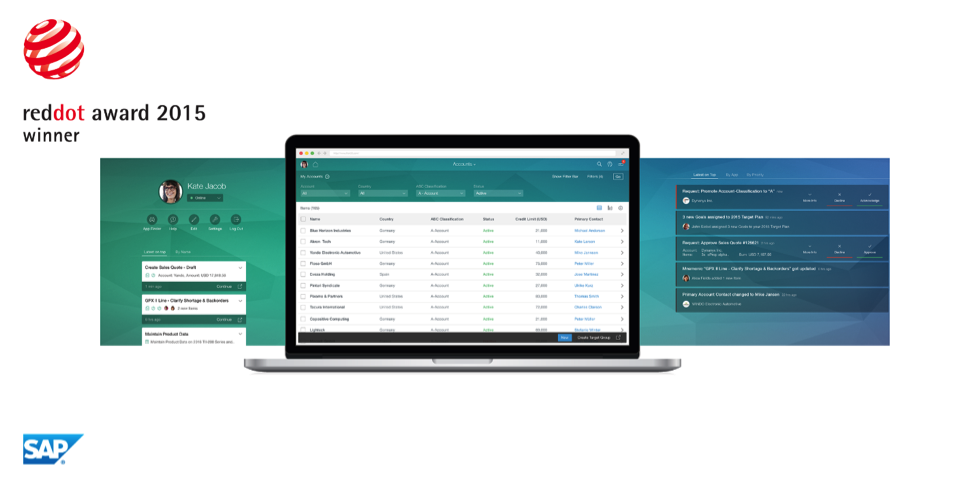 The making of the video is a testimony to teamwork. Prior to the video, no one had ever been able to actually imagine the next generation of the Fiori user experience in a palpable way. Going above and beyond current SAP Fiori design, which address relatively simple business transactions, Fiori 2.0 targets more complex scenarios. The vision that the team put together is the foundation for the next evolution of the SAP user experience and is planned to be the new user experience for SAP S/4HANA and other solutions.

While the concepts behind the future UX of SAP products are mature, and the architecture work is complete, no one, not even the designers and developers involved with the project, was able to imagine this new and modern experience for business software in action. The various design concepts and capabilities behind SAP Fiori 2.0 existed in the minds (and specification documents) of many individuals in various development and design teams and, up until the making of the video, had never come together before as a whole.

This is actually the reason we hatched the idea to make a video in the first place: Despite all the innovative work taking place in SAP, the team had a hard time communicating what the next-generation user experience would actually look like. We could talk about it and even create mockups and drawings, but the experience really could not be understood without people being able to see the ideas and concepts together and in action. This is the challenge with design: It remains an invisible, intangible concept until you can show people its purpose in some meaningful way. In short, it needs to be experienced to be real.

Sensing their frustration, I asked the team to create a proof of concept and a video that would put some form around the design concept. And because I really believed a video would be the best way to do this, I decided to notch up the challenge and said, “It would be great if you could win an award.” After all, SAP has won several design awards in the past for our consumer applications, but these were not SAP’s core products. Winning an award for the design of an enterprise business application would be something else altogether.

We brought together a team of four individuals to make this happen. Each and every concept highlighted in the video was actually designed by many people, as this foursome worked hand-in-hand with the architects, developers and designers from the entire Global Design team to put a face on how SAP Fiori would evolve. It was really important that the end product not just be a great design or fun video to watch but something that could be built within the next year or so.

When the Global Design team saw the video for the first time, it was amazing. They could finally see, in concrete form, how their ideas came together to transform the working life of business people. Suddenly the video took on new meaning – originally intended as an internal communication vehicle, it also sparked a renewed sense of purpose, inspiration and motivation for the team itself. Until that point, the individual contributors had not truly fathomed the impact of their part of the larger project. When they saw what it would look like when all the parts came together, they wanted to work harder to make sure it would happen.

The enthusiasm spread further when we showed the video to our partners in Fiori Technology and others inside SAP. We could never have anticipated its viral impact, as we received request upon request to share the video with more and more internal teams and, ultimately, with our customers. Everyone, it seemed, was fired up by the ability to show how SAP Fiori could be used not just for simple transactions but to really address the broader requirements of enterprise software.

Although the video at that point had not been released publicly, one customer who served as a mentor for SAP asked if he could show a sneak preview of the video to his colleagues to help guide their decision-making about enterprise software within their company. He told us he was “absolutely stunned with SAP’s vision on user experience” and that his impression “was further underlined by the great visionary video that showed more concretely what SAP is thinking … and what the next-generation user experience in ERP should look like.”

What started as an internal communication tool to align our vision of Fiori has grown into a validation that SAP Fiori 2.0 is the new face for digital enterprise software. SAP is changing the experience of enterprise software to be as light and playful as consumer apps but with the reliability, scalability and professionalism that the business world requires.