Unless you were suddenly hit by amnesia this morning or somehow managed to stay off SCN for the past few months, you must know that TechEd 2015 kicked off today in sunny Las Vegas, Nevada.

Apparently the idea to visit Las Vegas simultaneous occurred to about two millions of people – the line to get a cab from the airport vividly reminded me of a boa constrictor. To add insult to injury, the large overhead display was constantly playing the SAP competitor ads. 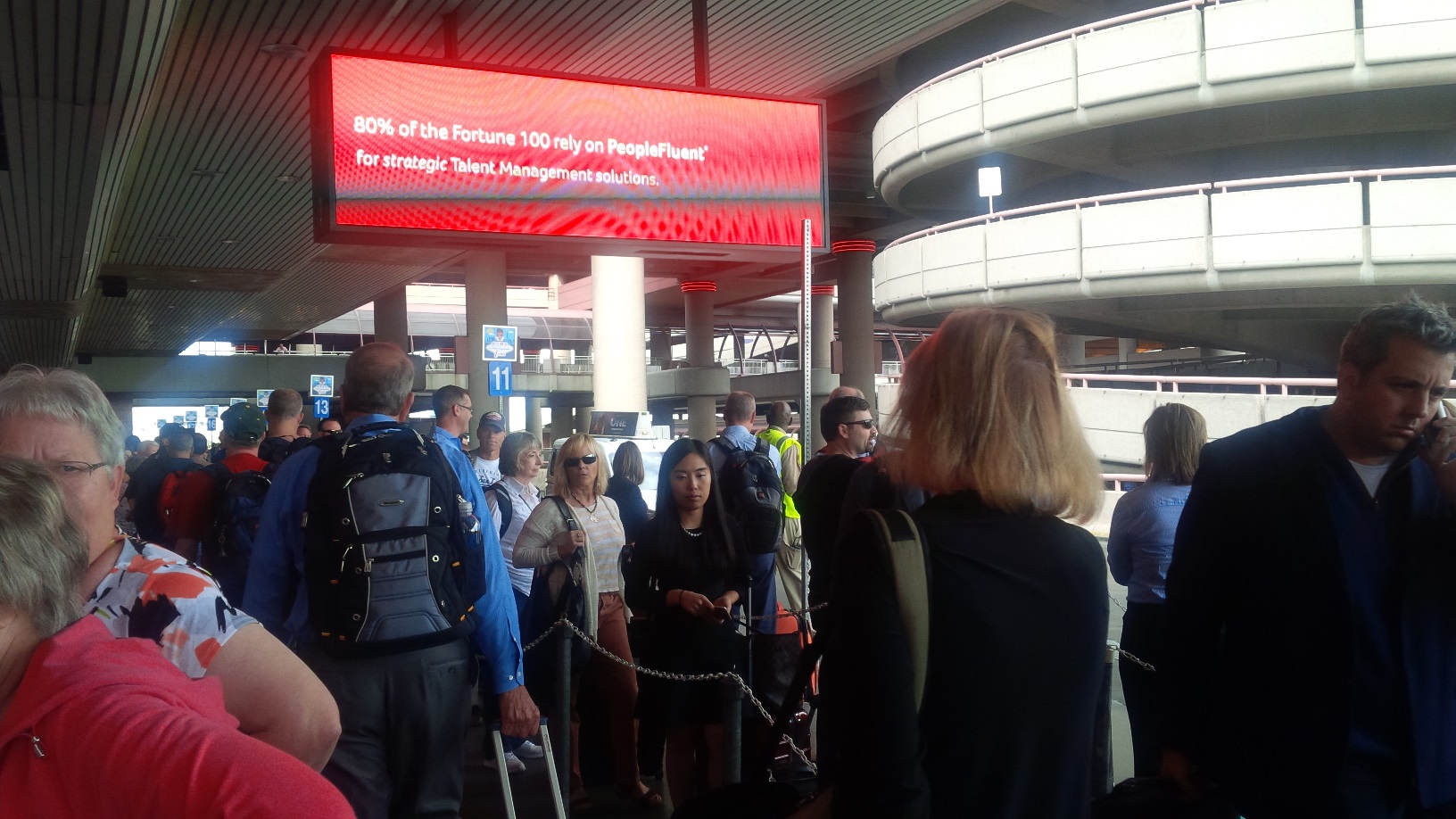 From the cabbie (who was born in Croatia and falls into the 5% of the US population that knows where Latvia is) I learn that the conferences of less than 20,000 people don’t even count as a major event in Vegas. So TechEd is really not more than a regional sales meeting, as far as Vegas cabbies are concerned.

In the first world problem department. Due to some short term (I hope) brain malfunction I made a reservation at the Venetian hotel instead of the familiar Palazzo. This year TechEd is definitely turning into a major learning experience for me. For example, I’ve already discovered the world’s best hidden elevator – it leads to the guest rooms in the place called “Venezia tower”. If I don’t make it to the sessions tomorrow it’s because I took a wrong turn in one of the halls and ended in a parallel universe where Oracle ERP runs on HANA. I’m pretty sure it exists somewhere here, at the Venezia tower of terror.

Well, at least not many changes in the registration process. The attendees receive a USB memory stick and a massive water bottle. Also there are ribbons available with different statements on them, some are even mildly funny, like the one below.

I’m quite confused why on the badge the word Mentor is in quotation marks, but after looking around I realize it’s not just me but everyone’s badges look somewhat sarcastic – be it “Attendee” or “Partner”. 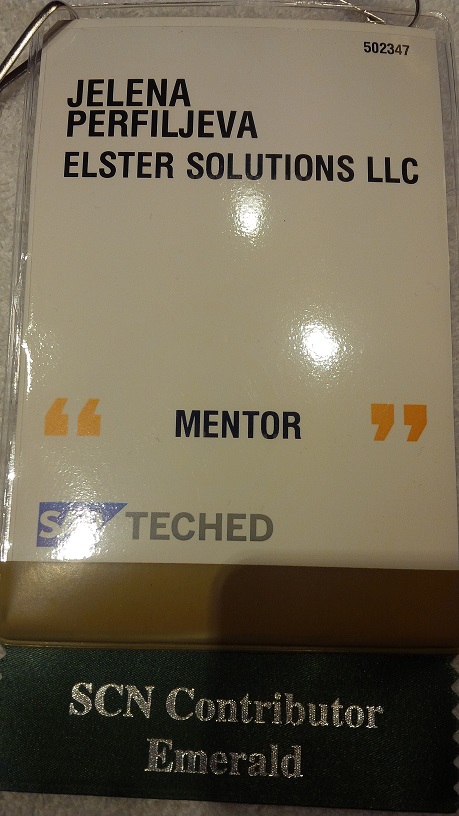 On the way to the keynote I notice a large poster with familiar face of Susan Keohan. Later I’m told that there might be another poster like this with my picture. Oh dear… 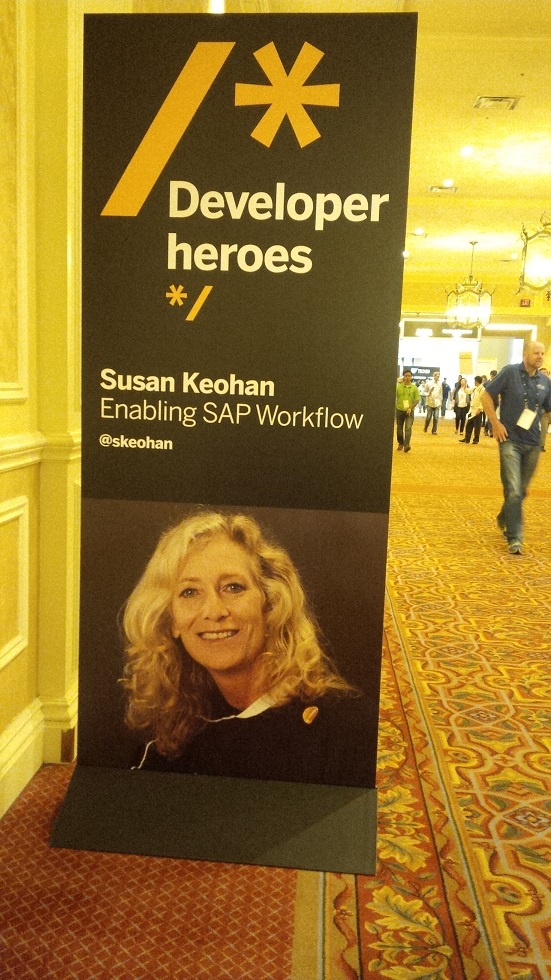 Keynote is running unfashionably late, meanwhile we get a view of live tweets from the audience. There might even be some compromising pictures of me floating around the interwebs. Everyone is paparazzi these days… 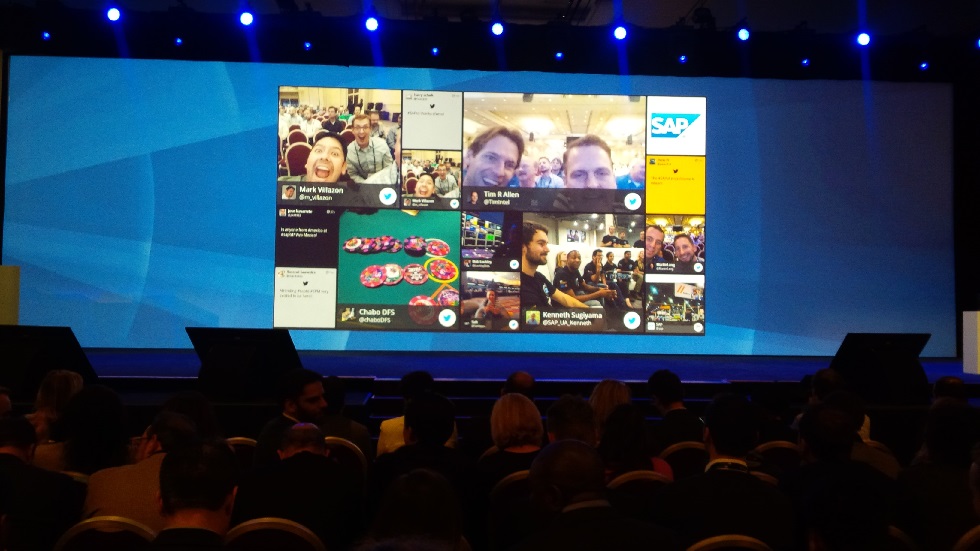 Finally Steve Lucas takes stage. He’s dressed casually in jeans, which would look very odd at SAPPHIRE, but won’t raise any eyebrows at TechEd. (Well, look who’s talking – I’ve been wearing jeans since, uhm, at least SAPPHIRE. By the way, one tip – don’t wash your jeans before a long trip! Or ever actually.) Mr. Lucas puts on his best showmanship skills and for a moment I think wow, this is going great. Some jokes are made about the keynote being “buzzword compliant”, some fun is poked at the competitors. Then somehow the subject of digital economy shifts to “digital core” and my mind immediately tries to go into the sleep mode. Well, I dare you to look at the slide below and (a) not to space out before the end of sentence; (b) make sense of it.

Anyhow, suddenly we don’t talk about “digital” anymore (might need to watch a replay, but so far I still wonder what was the point and where Mr.Lucas was going with that) and multiple “human props” come to stage, starting with Jim McKelvey from Square, Inc. Personally, I quite like his speech – he shares some personal stories, is engaging and appears genuine. Long line of other guests (including none other than SCN top contributor John Appleby) follows, yada-yada-yada, then we watch the video about the One4 initiative with Imagine Dragons and make a picture of everyone holding up their One4 message. This seems like a perfect final note, but… the keynote continues after that for what seems like another hour with more people coming on stage to show us some dashboards and tell us how HANA is awesome.

There are not that many sayings in Latvian language but the most popular one is – “the good songs are short”. I guess it applies to the blogs too, so I bid you adieu till tomorrow and hope that Mr. Leukert won’t let us down with his keynote. Well, on a bright side – there are only two of them at TechEd and we are already 50% done. 🙂

P.S. Update – was going through the keynote replay today to find the bit with Jim McKelvey to show to my workmates and was very disappointed to find that his bit was severely edited. 🙁

Loved the start of your TechEd blog series, Jelena! And yeah, someone in the organisational department seems to have overlooked the ""-thing ("Mentor"... "Partner"), or have they? Are they the same for employees, too? "SAP Employee"... I would become suspicious. ^^

By looking at that "digital core" slide I start to see new abbreviation possibilities: Next-gen ECP coupled with CBAs delivering analytic insight to operate you CCB.
Stuff like this always reminds me of the Web Economy BS Generator. 😉

Who needs to go to the hassle of flying to Vegas to attend TechEd? We've got our very own "reporter on the ground" (in quotes, even!) "Jelena Perfiljeva" (more quotes!) with the play-by-play.... 🙂 Ok, actually, I'm missing out big time, I can tell. Big posters with your pictures on them, eh? Ok, looking for a photo in your next blog of the poster of you.

Time to engage the cognitive systems (aka, drink some more coffee)...