Today was RTC of SAP NetWeaver 7.5 with AS ABAP 7.50. While there are already some big pictures around, let me provide you with some small ones. 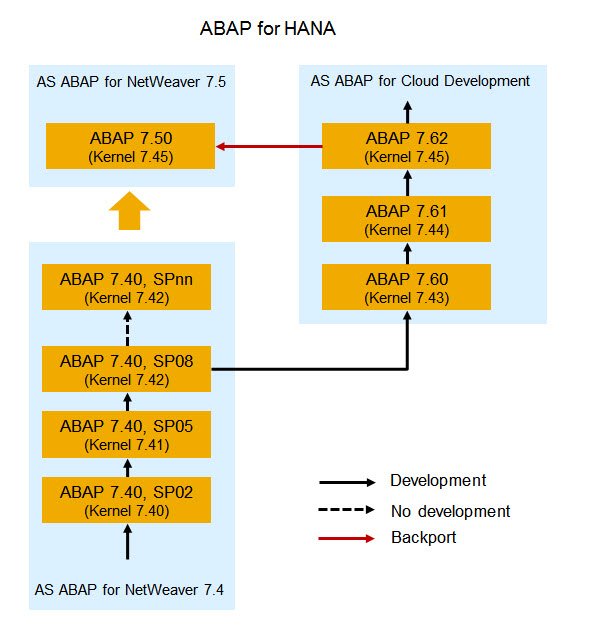 The figure shows ABAP Language and ABAP Runtime Environment as seen by sy-saprl, so to say.

Of course, the ongoing development of ABAP did not stop with that. You might have heard rumors of 7.60 and Co. already. A new release line was opened for SAP’s internal cloud development immediately, starting with ABAP 7.60 based on Kernel 7.43. This line has short release cycles, where each release is connected to an own Kernel and delivers new functionality. These releases are used – and thereby tested – by SAP-internal development teams.

For all the other environments than AS ABAP for Cloud Development, the now shipping release ABAP 7.50  was created as a copy of ABAP 7.62 based on Kernel 7.45. For these environments, as e.g. SAP S/4HANA or SAP NetWeaver 7.5 standalone, ABAP 7.50 is simply the direct successor of ABAP 7.40 and provides the ABAP Language and Runtime Environment for AS ABAP for NetWeaver 7.5. See the big pictures, where ABAP 7.50 will be available.

In an upcoming series of blogs I will present to you the most important ABAP news for ABAP 7.50. And there are quite some of them …

as always I like your blogs because it is so highly spicked with important background information to draw a bigger picture.

I was waiting for this blog since a long time 🙂

I'm looking forward for all the upcoming blogs about the new 7.50 ABAP features.

Horst thanks for the insight. Can't wait for the blog on the ABAP news. I hope there will be a ABAP 7.5 version available on CAL soon.

Waiting for your blog on release of ABAP 7.5, Kindly do let us know on the same.

You can simply check my Contents from time to time 😎 .

Iam one of the regular reader of your blogs. Its so detailed and give big picture of what things are ... Thanks Horst ! 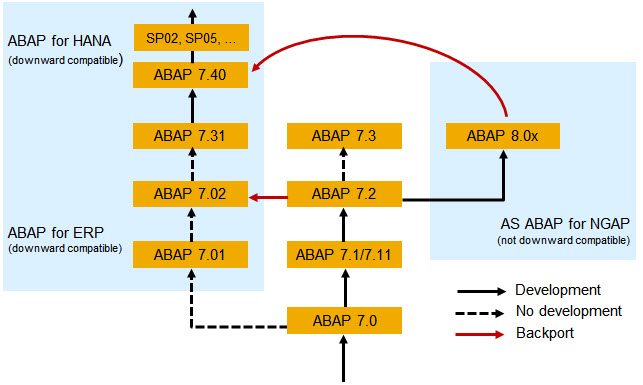 The picture has not changed. The 7.50 figure extends it on the left. NGAP is still there and used SAP-internally for ByD.

I know it's slightly off-topic. But: what will happen to the ABAP stack in the planned S4HANA environment?

As far as I read from various sources in the web, I have the following picture:

What will be the future of ABAP, NGAP etc. in the light of these plans?

Better ask that in another thread.

can you already tell, whether future versions of ABAP 7.5 will require kernel-updates, as necessary for ABAP 7.4 SP02 - SP08?

All SPs for 7.50 stay on Kernel 745 and are real support packages. Kernel changes must be done for critical patches only. A new Kernel with new functionality will be necessary for a new release of AS ABAP at the earliest. Let's give it the working title "Release 7.51".

Hi Horst,
any plans to implement something like upper in open sql to enable case insensitive searches?

we have plans, yes. But of course we can promise nothing. Emulating ABAP's UCS2 semantics on Any-DB isn't exactly like celebrating a party :-).

Of course there is even better stuff in the SQL standard, like arbitrary collations. But this is even more improbable.

This is probably bothering me way more than it should, but although the instruction below is correct from a syntax point of view, it still displays some of the characters in red, leading developers to think there is a problem.

Is there any way around this ?

Do you have the latest SAP GUI?

Thanks, indeed that was the problem. I was checking in a VM with an old version of the SAP GUI (7.30)

I checked in Eclipse and a recent SAP GUI and that's much better. ?