Stefan Wolf was born in a town on the outskirts of Frankfurt, Germany (about 100 miles from Walldorf). He has spent his entire career at SAP serving the utilities industry. I had the chance to meet him for an interview. He is currently leading a team of North American solution managers in the Industry Business Unit Utilities. Read how on September 1, 1990, this solutions manager took a gamble as a new dad and graduate and made SAP his employer of choice. 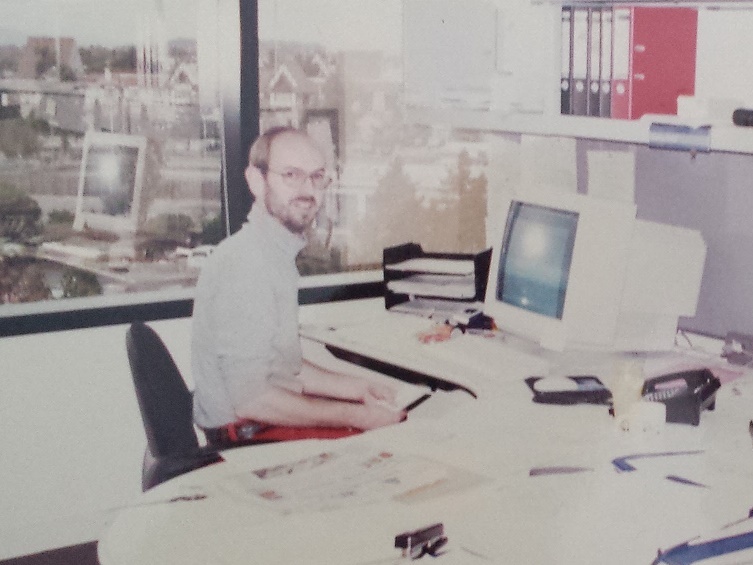 Towards the completion of my studies in the late 1980s to achieve a diploma in Computer Science I was looking for interesting employment opportunities. Studying in Erlangen near Nuremberg meant I was very close to the Siemens head quarter and many students applied there. There was also Datev in Nuremberg, the main data center for the tax accountants and consultants in Germany, another very solid employer. And of course I applied at those companies for a job. But a friend of mine told me about this new software company SAP in a small town called Walldorf. I had heard about them before through the IPO a year earlier but their initial stock price was too high for my limited investment money as a student so I did not sign up. But I applied for a job offering they had. When I received job offers from all these companies including SAP my father was astonished if not concerned that I was actually considering this unknown employer over the well-established firms. Especially since I was already married and we had a little boy. But there were a few things which drew me to SAP. For one excitement about a (relative) new and small company offering more opportunities and flexibility but also that I had my interview actually with one of the company founders, Dietmar Hopp, and the very colleagial atmosphere the interview took place. I immediately had the feeling that this company is about doing, not only planning. So I took the offer and have not regretted it since!

Besides everything I learned about my industry, utilities, and the computing expertise like ABAP programming, etc. I learned foremost that change is inevitable and flexibility is key. SAP as far as I can tell never left things unchanged for a  very long time. But not just to change but to improve. Sometimes it took a while to get it right but we never stopped trying.

When R/3 got its legs in the early 1990s it was discussed to provide our industry solution for utilities not only on the R/2 mainframe platform but bring it to the new client-server world. We eventually go the approval but only if we would made the solution available for all major countries, foremost the US. My boss was asked to establish a small development team in the US to lead the localization. I volunteered, after checking with my wife of course, since we just renovated our first owned house and had our second child a few months ago. She agreed in a hear beat which surprised me but even more our parents. The assignment was meant for 2 years, that was in 1996 and we are still here and we still like it.

How do you compare living in the U.S. with living in Germany?

Hard to compare. In Germany we have all our relatives, that is something I miss the most. Other than that life can be good and hard on both sides of the ocean. You have to arrange yourself with those conditions you cannot change (like accepting that there is very little rain in the Bay Area, I actually met Germans who did miss the weather in Germany) and you may have to pay more to get things you like to have which are not common, like good German bread, sausage and meats. But you also can appreciate the advantages like a great coast nearby.

Biggest difference I would say is the diversity here in Silicon Valley. Having people from so many corners of the world working and living together in harmony, that you can hardly find anywhere else.

That is a good one. Was it the perceived chaos through Y2K which was the biggest non-event of the millennium or the introduction of competition in the energy retail markets called deregulation but actually creating even more regulations how to de-regulate or was it the Smart Meter which in the end was seen as what it really is, just another tool reporting data and that it actually is about the data or the Smart Grid, which is sort of the evolution of the Smart Meter change throughout the distribution network or is it now the digitization of the entire utility value chain?

I guess each of those had its share of change and challenge and each provided a stepping stone for the next r-evolution. Given the magnitude and effected parts of the overall processes at a utility, the digitization including the technology advancements like real real-time data processing through in-memory computing on a business scale, the ability not only to create immense amount of data but also to process it and turn it into value, that is bigger than the changes which came before. But I am sure it will not be the last change!

Through the last 20 years or so I would think we have a trend to move more and more possibility as well as responsibility into the hands of the consumer, allowing them to not just consume but to manage. That is not going away, it is most likely accelerating. So the utilities industry will have to cope with that, providing these possibilities to their customers and helping them to take on that responsibility. The alternative is that other players will do that and render the well-known utilities unnecessary or at least turn them into sideline players without real opportunities for growth.

There will be technological advances in power generation and storage allowing the local provisioning of energy and eventually water reducing but not removing the need for costly transportation. We will also need less energy through more efficient buildings and transportation but there will be many more people and many more “things” we need in our life. Whether that will lead to a total increase or decrease of consumption is everyone’s guess. I would think in the long run we will need more but not through more use of resources, especially not the use of non-renewable resources.

SAP needs to stay on-top of these challenges and changes and needs to be ready to adapt. That includes working with our customers with existing and new, emerging players also at the risk of making mistakes. We just have to recognize them early so we can adjust and refine. But surely business will get more complex and more networked, so providing simplification to the business users, their business partners and customers can be our playing field.

In utilities we are at a point where this is ours to lose, we should not let this happen.