As the old saying goes, “build a better mousetrap and the world will beat a path to your door.” Tony Dighera of Cinagro Farms (organic spelled backwards) has taken this timeless quote of innovation to heart by thinking outside the pumpkin. His “pumpkinstein” creations – pumpkins that grow inside specially made Frankenstein molds – are flying off the shelves, fetching upwards of $100 each. 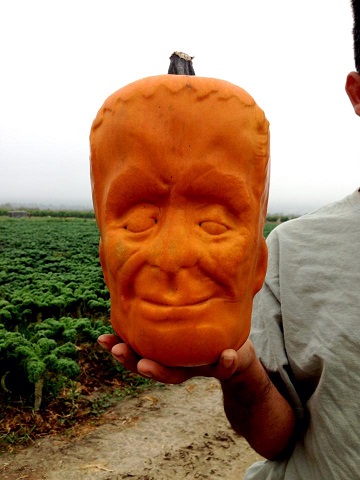 But the path to pumpkin glory was hardly an easy one. Here’s more from CNBC:

Four years of trial and error with different molds and dozens of pumpkin varieties had Dighera exasperated, but he had one more idea. “I wanted to try just to see if it would make a difference, and it did,” he said. “I knew I had it.”

Dighera’s instincts were spot-on. His mad creation landed him on the cover of the New York Times this year. Big box retailers like Sam’s Club took notice and contacted Dighera about cutting a retail deal, but he was hesitant at first. Here’s more from CNBC:

“I’ve got to be honest, originally, I just kind of blew it off,” the farmer said. After all, Cinagro was producing a manageable number of pumpkins for top dollar, “and I just didn’t think it was a fit.”

Dighera ended up striking a temporary deal with Sam’s Club who will sell pumpkinsteins for less than $30. This provides Dighera with the flexibility to still sell pumpinsteins at premium prices elsewhere – if he’s able to meet demand.

Last year, Cinagro produced about 5,000 pumpkins. This year, the farm has orders nearing 90,000. How can a company of Cinagro’s size manage such a frightening uptick in orders?

With a product like pumpkinstein, the demand can change considerably based on the hype generated by social media, according to Richard Howells, Vice President of Solution Management, SAP.

“Capturing this unstructured demand, as well as short term demand signals from point of sales devices in the store are critical,” said Howells. “Building this into the full demand picture can provide companies like Cinagro with visibility into how demand will be over time, as well as how it is changing from area to area, city to city, and even store to store during the peak season running up to Halloween.”

Will you purchase a pumpkinstein this Halloween?

Is ‘Halloween’ the Greatest Horror Movie of all Time?

Above photo courtesy of Cinagro Farms.