I, Roshan Dangol and Panshul Avasthi are the post graduate students currently studying at Victoria University, Sydney. We both teamed up together working as report analyst for large media Organisation where we are responsible for creating report on the particular issue on indigenous and non-indigenous Australians along with the visualization data with the help of visualization tool called SAP Lumira. We choose the topic  ‘status of Indigenous and Non- Indigenous Australians based on life expectancy and mortality ‘ because we are curious to know about the current patterns and trends in mortality and life expectancy among indigenous and non-indigenous people in Australia and the cause of death and the declining the mortality rate from different diseases. We would like to thank to our teacher, Parves Ahamed who has more than 15 years of experience in SAP industry. He is our mentor who influence us to write this blog and this is our first ever blog on any forum which is the challenging aspect of this analysis. During the Business Analyst class with Parves, we learned how to use SAP Lumira so we decided to use this tool to analyse the data about the cause of death and the mortality by ***, age and indigenous status within the Australia.

The main objective of this blog is to analyse variation in Australians Indigenous mortality in terms of life expectancy and mortality rates compared with non-indigenous Australians. The Australian population experiences death rates amongst the lowest in the world. However, the death rates for the Indigenous population are higher than non-Indigenous population which indicate the health status of  Indigenous people in Australia is worst compare to other Australians. Mortality rates can be used as a measure to record the continuous changes in overall health status  of Australian population. Life expectancy measures how long a person is expected to live on average. It is a measure of health of populations recognised globally which is influenced by factors like health behaviours (smoking), social determinants (education, income and employment, access to health service), social and environmental factors (overcrowding and inadequate sanitation).

According to Mahfuz,” Life expectancy at birth widely used as an indicator of overall development of a country, has increased over the last ten years in most of the countries of the world. This has a particular indication for the developing world since they striving earnestly for achieving socio-economic progress”. By analysing socio-economic factors, ‘Life expectancy’ measure is used to access the possible demographic changes by national development programmes. And the data that generated from the study contribute to economic development.

Here are the following visualizations which we create from SAP Lumira from the data available from the Australian Bureau of Statistics (ABS) Experimental Life Tables and AIHW National Mortality Database (NMD) which helped us to understand the pattern and trends in mortality among Indigenous and non-Indigenous Australian. 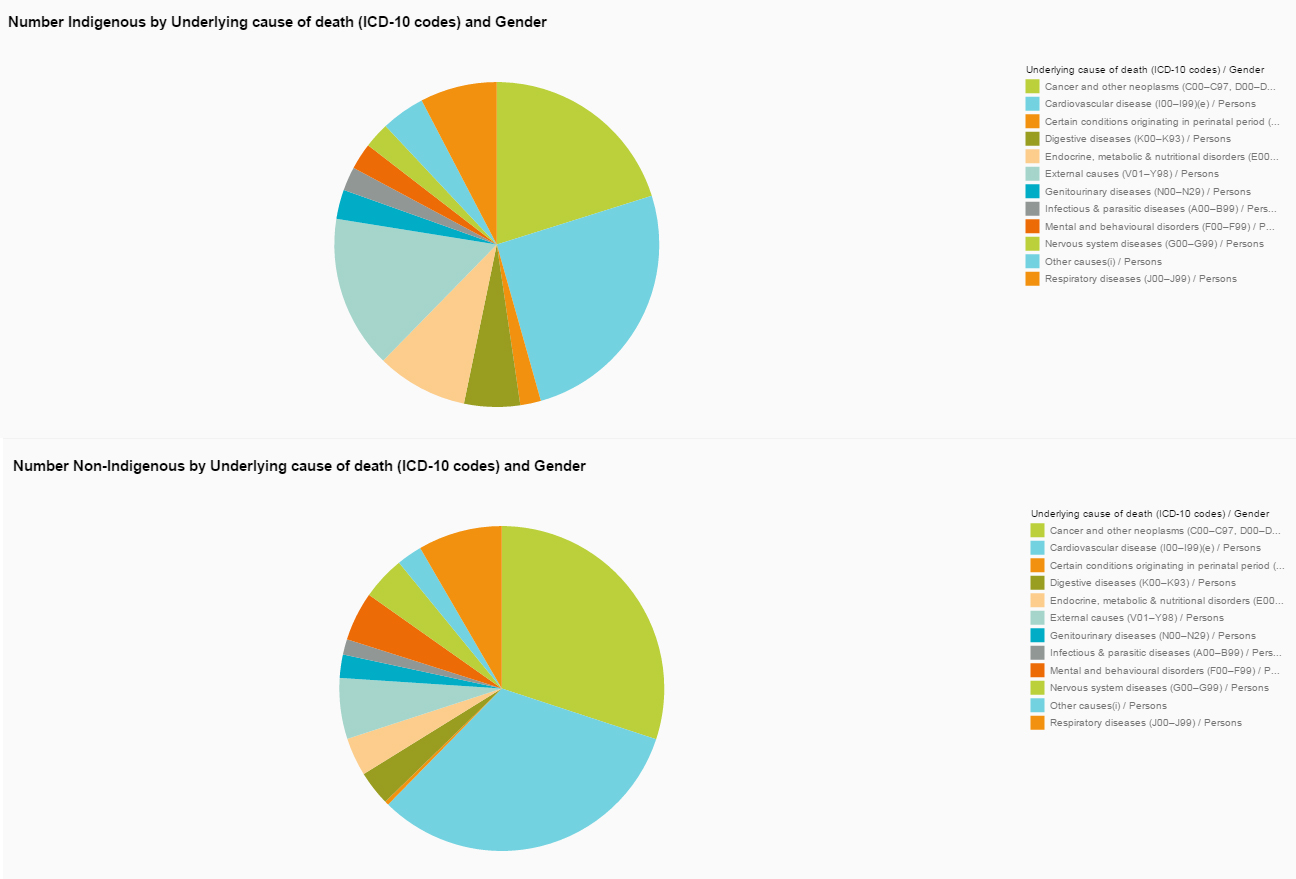 Visualization 5 shows that highest death of indigenous infant was caused by other cause whereas the highest rate of young age (15-34) indigenous people were dead due to external causes. 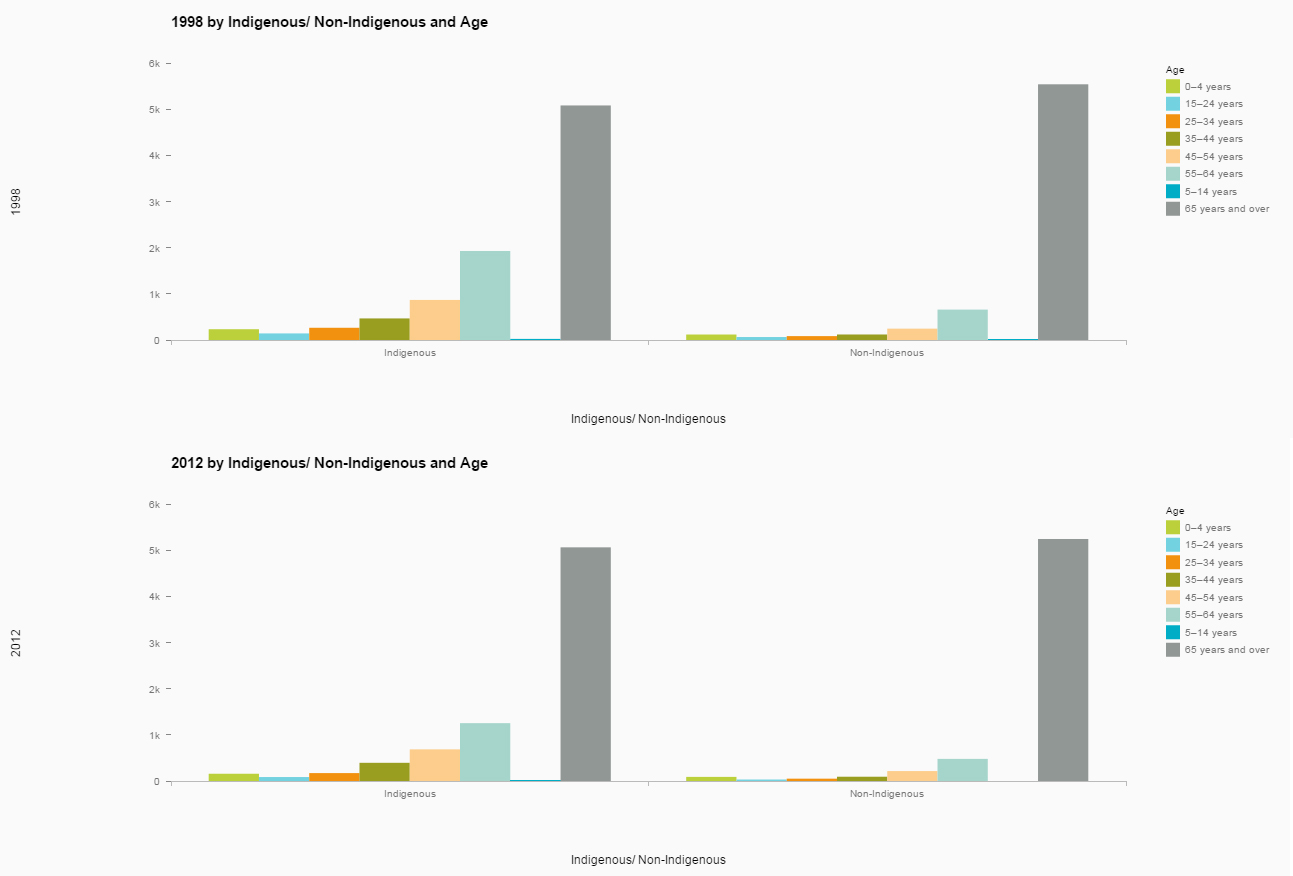 In conclusion, after analysing all the visualizations with the help of SAP Lumira, it is clear that mortality rate of indigenous Australians is higher than non-Indigenous Australians due to the causes of death such as circulatory diseases, cancer, external causes, endocrine, metabolic and nutritional disorders, respiratory diseases and digestive diseases. Change in the pattern of causes of death has reflect changes in behaviour, risk exposures, health risk, socio-environmental hindrance and medical and technological effects. Actions are needed to be taken by the government and emphasize on the indigenous people as well.

Many Thanks to Parves Ahmed