This blog is about our journey of discovery into how Aboriginal Australia differs from Non-Indigenous Australia. The Blog was written by Patrick Thomson and Aries Aprianto, two students in ERP Systems in the College of Business at Victoria University in Melbourne, Australia. As part of our Business Analytics course Associate Professor Paul Hawking gave us an assignment to use the SAP visualization tool Lumira to create a series of visualizations of data to tell our story about Australia. The accompanying video is made using Adobe Captivate to explain our findings. We used the Australian Bureau of Statistics datasets from the 2011 Census to delve into certain topics and find what highlights the differences between Aboriginal and Non-Indigenous Australia. Please join us on the journey of discovery.

Who are the Aboriginal people of Australia?

Let’s firstly look at what defines Aboriginal people: on the Aboriginal Culture website (http://www.aboriginalculture.com.au/introduction.shtml), “The word “aborigine” (with a little “a”) means one of the original native inhabitants of any country. The word “Aborigine” (with a capital “A”) is used to describe the indigenous people of Australia. In Australia, many non-Aboriginal people use the terms “Aboriginal” and “Aboriginals” as singular and plural nouns for the people. Aborigines describe themselves using the various words which mean “person” from each of their own different language groups (tribes).”

In Our Common Bond 2013 (http://www.border.gov.au/Trav/Citi/Lear/Citizenship-test/Australian-citizenship-test-resource) we learn that the first inhabitants of Australia were the Aboriginal and Torres Strait Islander people. They have one of the oldest continuing cultures in the world and have lived here for 40000-60000 years. They have a deep connection to the land that is expressed in theirs stories, art and dance. European settlement arrived in Australia with the First Fleet on 26 January 1788, and we now celebrate Australia Day on 26 January every year.

Of Australia’s three flags (National flag, Aboriginal Flag and the Torres Strait Islander flag) we would like to highlight and discuss the Aboriginal flag, which was designed by Harold Thomas, an artist and an Aboriginal in 1971. “The black represents the Aboriginal people, the red the earth and their spiritual relationship to the land, and the yellow the sun, the giver of life”.

We were interested to learn that “Aborigines have differing views on how their culture should be described. On the one hand, people are proud of their culture and want outsiders to know of it. They have seen the impact of European culture in Australia and the threat this has to their own. Fearing the loss of their knowledge, both secular (non-religious) and sacred, they have imparted much that was once secret, known only to the most senior members of their clans, to explorers, missionaries, pastoralists, interested visitors and anthropologists. On the other hand, in order to continue their cultural traditions and maintain law and order, they need some of the secrecy of their initiation rites and ceremonies kept. This secrecy makes the process meaningful for future generations.” (http://www.aboriginalculture.com.au/introduction.shtml)

This shows the damage that the Western Invasion and influence have had on the Aboriginal people and their culture. The difference Aboriginal peoples of Australia are seen as its Traditional Owners of the land and this is recognized in any official ceremony.

We decided to compare the Indigenous and Non-Indigenous people in Australia using the ABS statistics and datasets from the 2011 Census by looking at:

What story does statistics tell us about Australia?

Let’s know look at what we learnt from the statistics we had and the subsequent visualisation Lumira provided. We discuss the graphs in the video in sequence. The blog detail can be used in conjunction with the video to provide more detail.

In SAP Lumira, we have to treat the states as values therefore we have to change the setting from row into column as value in order to visualise data in SAP Lumira. Firstly we created a graph of population by adding the numbers of “Aboriginal and Torres Strait Islander people”, “Non-Indigenous people” and “Total Population 2011 Census” as Y Axis. Lastly we added “Origin” as Australian States into the X Axis. In the graph, we found that in the 2011 Census, the total population was 20,446,236 which of 19,898,113 were Non-Indigenous people and 548,123 were Aboriginal and Torres Strait Island people.

In the next graph, we were interested to look at the population numbers in states. We found that the highest number of Aboriginal people were in New South Wales with 172,624, the highest second number in Queensland with 155,825 and the lowest number in the Australian Capital Territory with 5,184.

In the language graph, if we look at the languages spoken by Aboriginal people – most aboriginal people speak English with only about 61000 speaking an indigenous language. This indicates rightly or wrongly how they associate with a western English-speaking culture or how important the retention of their Aboriginal culture is too them. 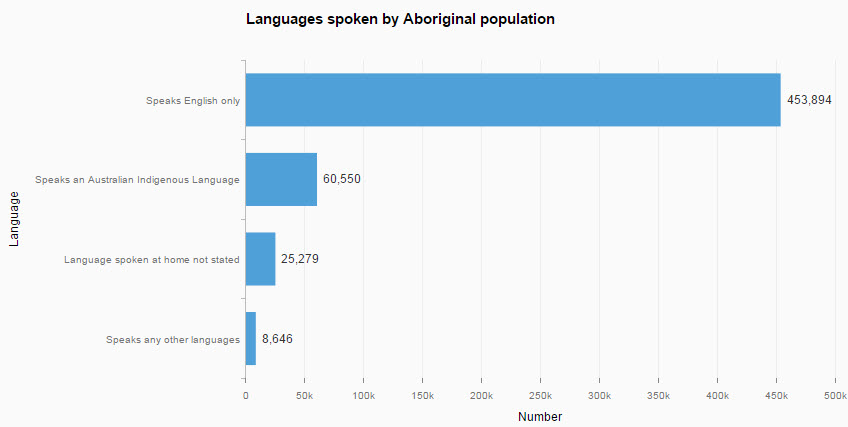 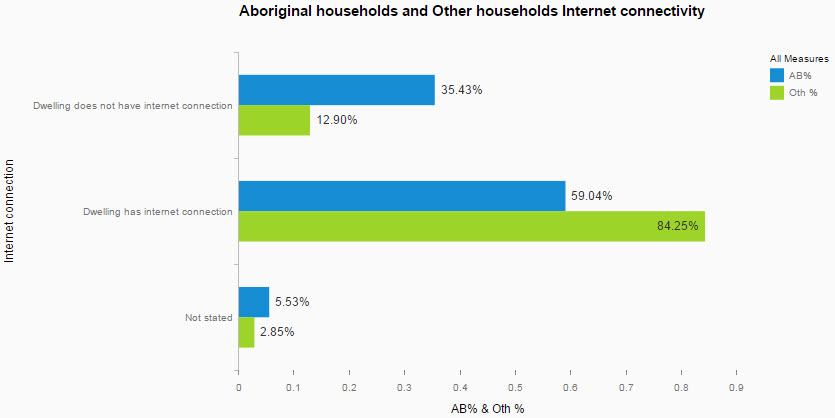 When looking at the education graph there is a very interesting trend towards better educated youth. Amongs the respondents aged over 45 years of age there were only 13% of the Aboriginal population which had a year 12 education against non-indigenous where that was 37% or nearly three times as many with a year 12 education. When looking at the younger age group from 20-24 years of age this looks a lot better where it has risen to 37 % Aboriginal and 75% non-indigenous which is really heart-warming. 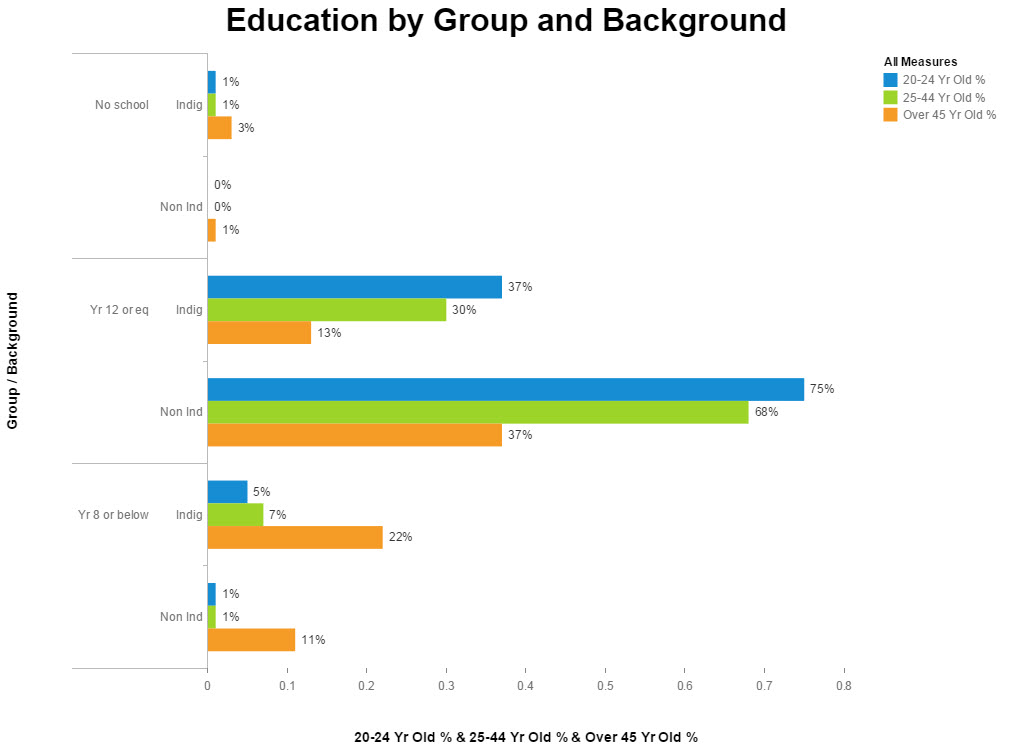 The housing graph shows how many more Aboriginal people rent houses at 59% vs 29% for non-indigenous population than own them which points to a certain economic reality which could hopefully be addressed in the future through higher employment figures. Owned houses are only 36% aboriginal vs non-indigenous at 68%, some of this may be a historical disadvantage amongst the Aboriginal population. 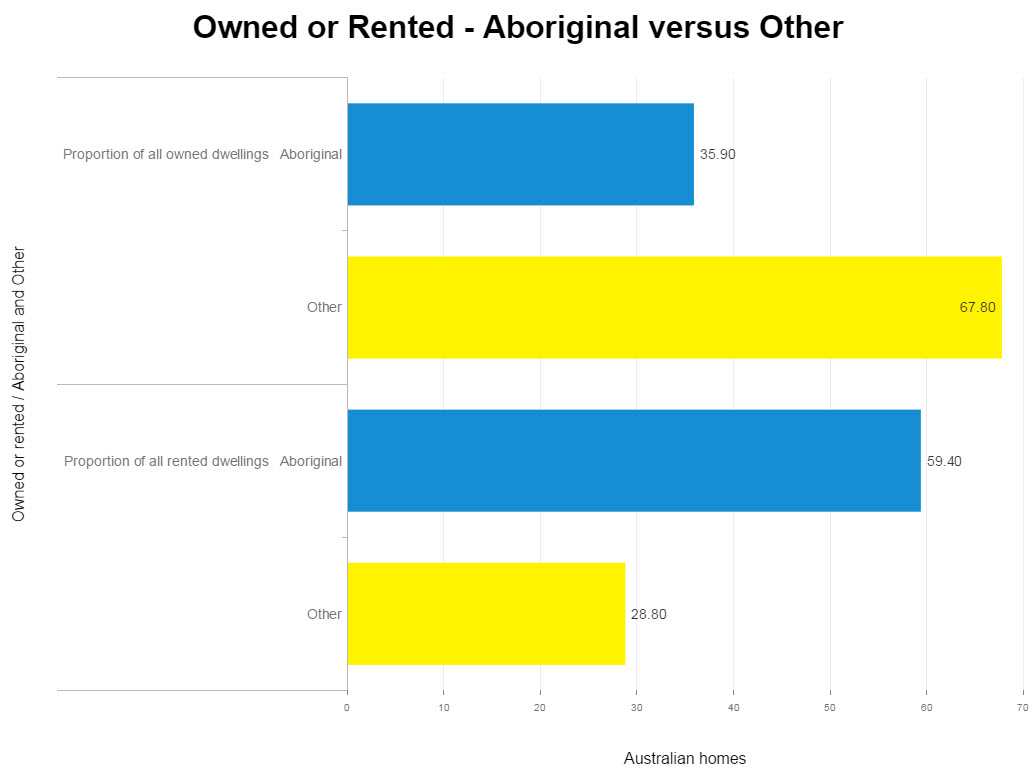 We have decided to highlight the top three crimes aboriginal people are involved on this graph and then the same in the next graph for the non-indigenous population.

The three highest crimes are assault which could highlight domestic violence. Second is unlawful entry which could be trespassing or the equivalent of breaking and entering in other words. The last is justice proceedings which could show an aversion to western norms of laws and rules. The three highest crimes are assault which could highlight domestic violence. Second is unlawful entry which could be trespassing or the equivalent of breaking and entering in other words. The last is justice proceedings which could show an aversion to western norms of laws and rules. 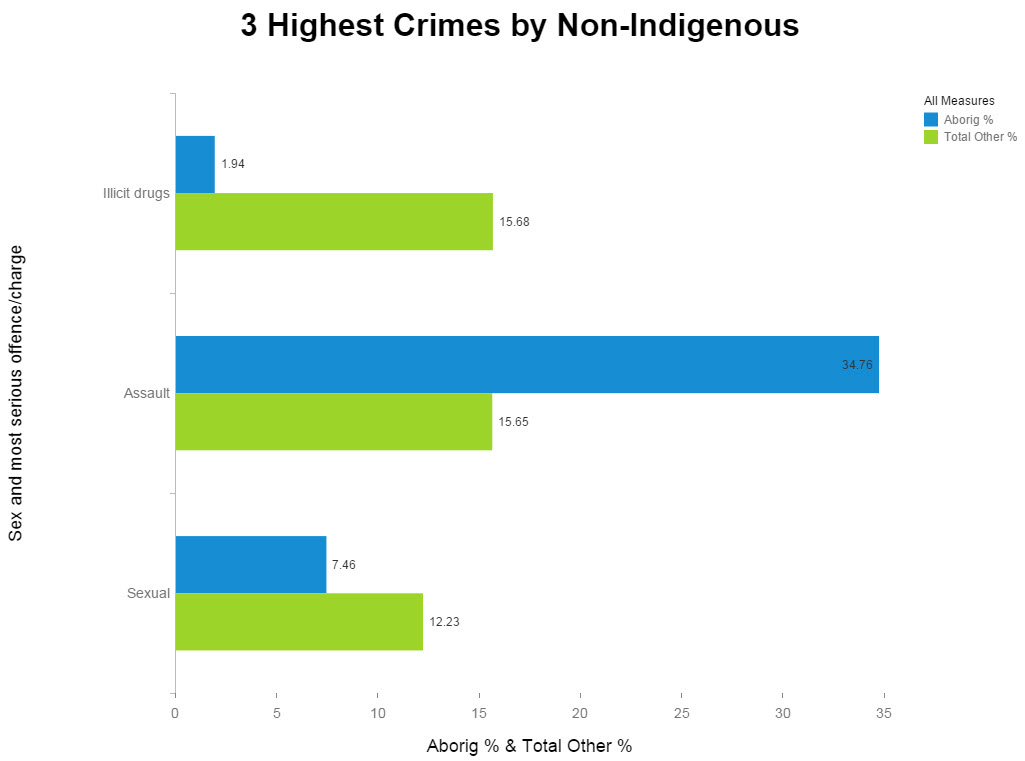 In conclusion we would like to highlight the things we have learnt from this study. We have learnt what a great and user friendly visualisation tool SAP Lumira is. We have also seen the differences between the Traditional Owners of Australia and the Non-Indigenous population living here today. This is illustrated by the differences in education, housing and crime statistics. We hope that this can be addressed through various programs of education but also a cultural awareness of what is important to the various cultures living in Australia.

We both have done an SAP Lumira workshop in our Business Analytics subject’s tutorial and discovered the benefits of SAP Lumira when we were doing our research for this assignment. As we live a fair distance from each other on opposite sides of Melbourne, we found that we could easily share our story in SAP Lumira with the Visualize and Compose features. We could fine-tune the graphs and share our changes to give us specific points of interest in the statistics and graphs via email and phone. This resulted in us saving travelling time through using technology to keep working efficiently on our assignment.