Indigenous Health – When will we close the gap.

I recently participated in a cultural awareness course at my place of work, and throughout the course it discussed many issued face by Indigenous Australians, both historically and in the present day. What struck me is that still in 2015, there remains very significant difference between non-indigenous and indigenous populations on a variety of socio-economic measures.

Before exploring the subject further, I wish to clarify, the term Indigenous refers to Australian Aboriginal and Torres Straight Islander people as detailed on the Australian Bureau of Statistics website.

The starting point for our journey of exploration was to engage with the population data, to understand the general age and mortality profiles. For this we drew census data from the ABS. 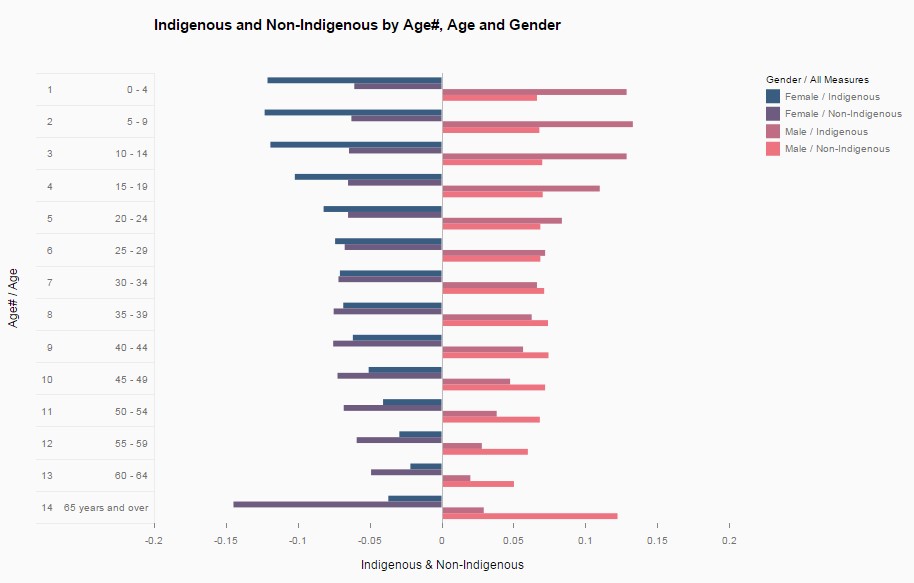 This chart conveys clearly that there are important differences between indigenous and non-indigenous populations. The age profile for non-indigenous is clearly an aging profile, while the indigenous is a much younger profile while a relatively small percentage of the population moving into older age (> 65 years). Using Lumira’s filters, we were able to study the change between census years, which reflect that both population profiles are aging progressively, however, the difference in pattern remains.

The next question to be answered was to examining more closely life expectancy. This time drawing on health statistics, we were able to examining the difference for indigenous vs non-indigenous mortality. The chart that follow is powerful. It shows the very stark contrast between population, with non-indigenous populations having very long lives, with a very significant number of women (>50%) making it into their 80. By contract, the indegnous live expectancy is far lower. Furthermore, differences in life expectancy do not seem to tell the whole story. According to the ABS, nationally, for 2005-2007 life expectancy difference between indigenous and non-indigenous was 11.5 years and 9,7 years for Males and Females respectively. Yet this doesn’t fully reflect the differences in overall health that is conveyed in the chart below. 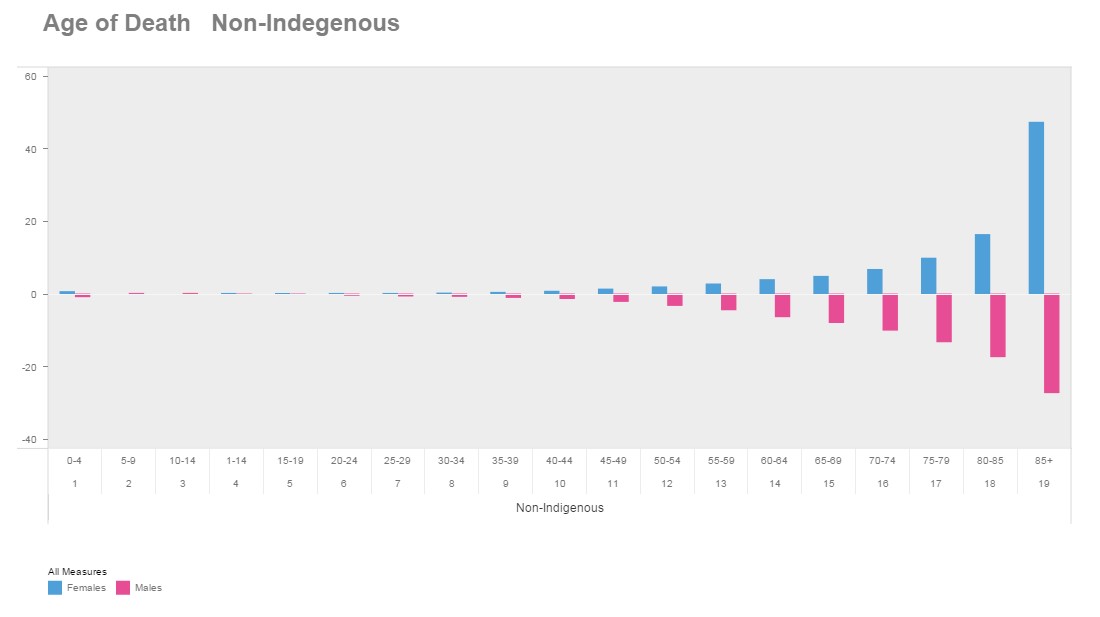 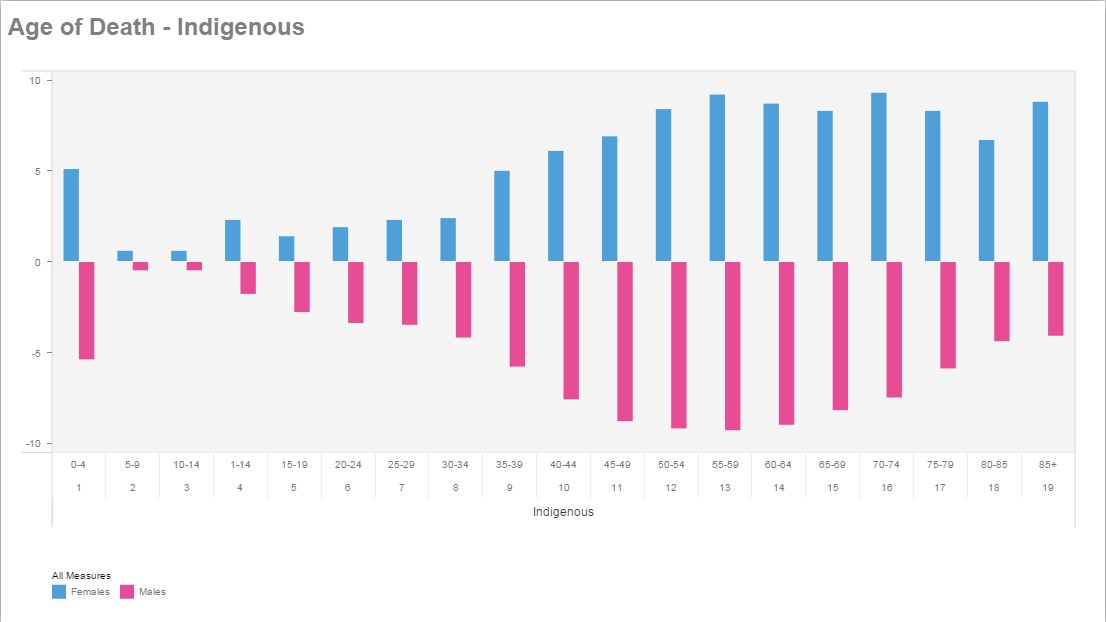 Next, we turned our attention to the major causes of death. Referring to the chart we discovered that the major cause of death for both population is circulatory disease (which includes heart attacks), secondly, non-indigenous people were more severely affected by Neoplasms (cancers). And subsequently we see that respiratory conditions and endocrine, metabolic and nutritional disorders (including diabetes) where the next most serious issues for indigenous (after cancers). Noteworthy that these condition are typically more preventable (especially nutritional disorders) 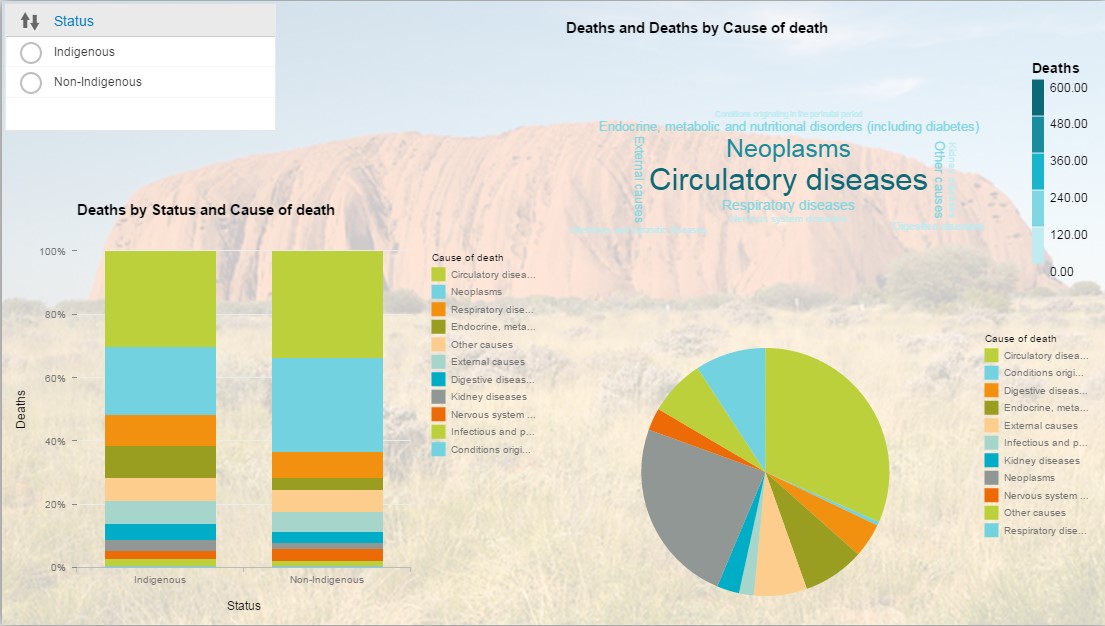 It was clear that there were many difference in terms of indigenous and non-indigenous health outcomes, but we wanted to examine possible causal factors, such as environment, or addiction. 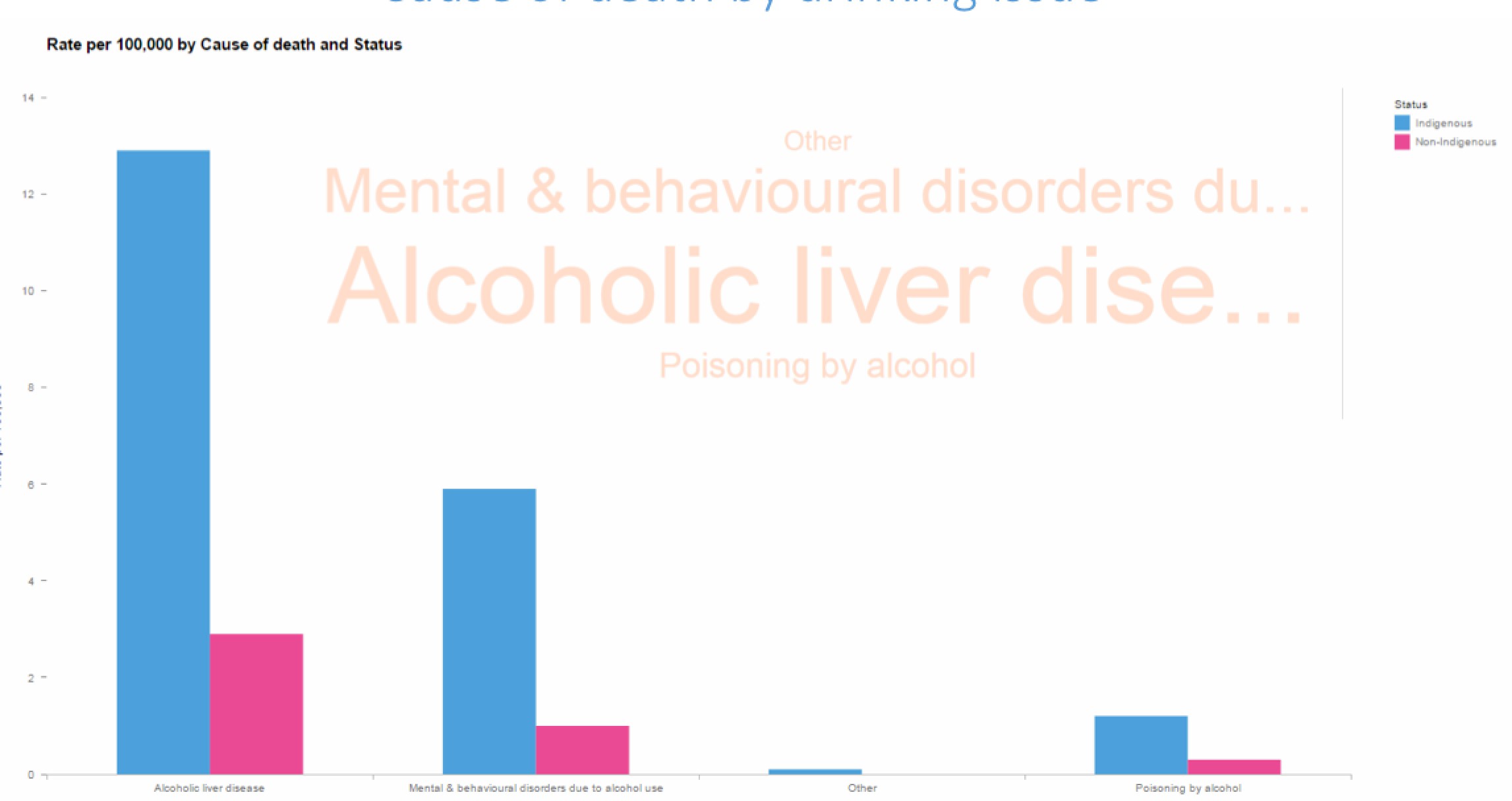 Chart: Main cause and number of death related to alcohol consumption

This chart illustrates main causes of death by inappropriate or over alcohol consumption. The major cause of death is liver disease, followed by mental/behavioural disorders and alcohol poisoning. The gap between indigenous and non-indigenous is massive. The number of indigenous death caused by liver disease was as high as 3 times than non-indigenous, the same pattern can be found in the death number caused by mental/behavioural disorders. 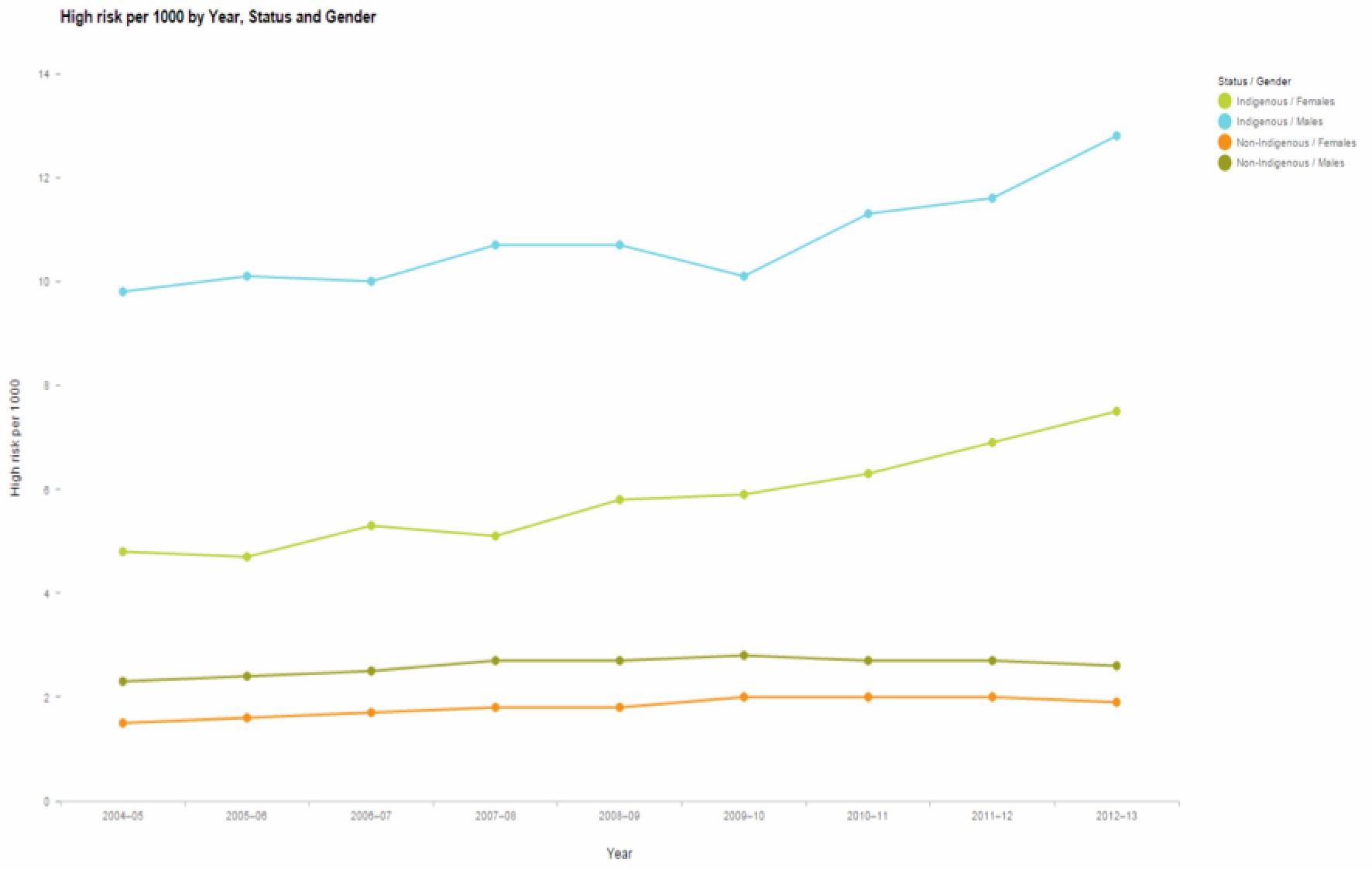 And if we relate this chart with the one above, higher risky alcohol consuming behaviour will lead to more death caused by alcohol use, the wider gap between indigenous and non-indigenous in high risky consuming behaviour will lead to wider gap of death number in between. Therefore it is of huge importance to drive more anti-driving campaigns or at least educate more public about drinking reasonably. 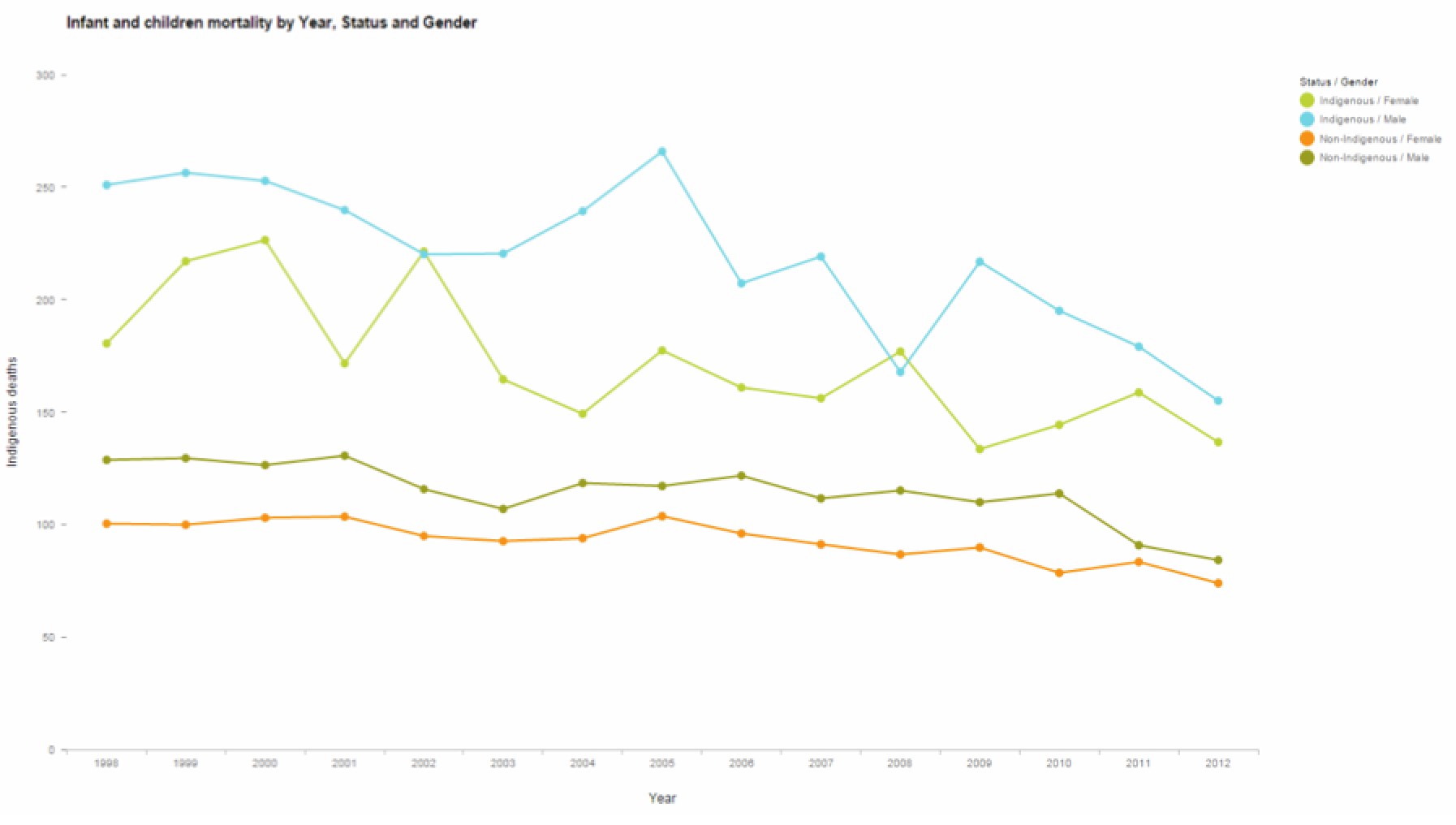 This chart is showing the number of infant and children death per 100,000 during the period from 1998 to 2012. It is more direct to understand if we convert the death number out of 100,000 to 1,000. Over the last 15 years, both male and female non-indigenous kept a very low infant mortality rate, which was around 1 per 1000 and the number kept decreasing slowly. The over all trend of indigenous was also dropping, however strong fluctuations can be seen from both male and female indigenous infant and children death number. Especially, male indigenous reached the peak in 2005 and the death rate was 2.8 per 1,000 while female indigenous achieved a record low in 2005 of 1.5 per 1,000 yet the number bounced back soon. By the end of the year 2012, the average infant death of indigenous was 1.6 per 1,000 comparing to lower than 1.0 per 1,000 of non-indigenous, still a very big gap yet much better than 15 years ago. 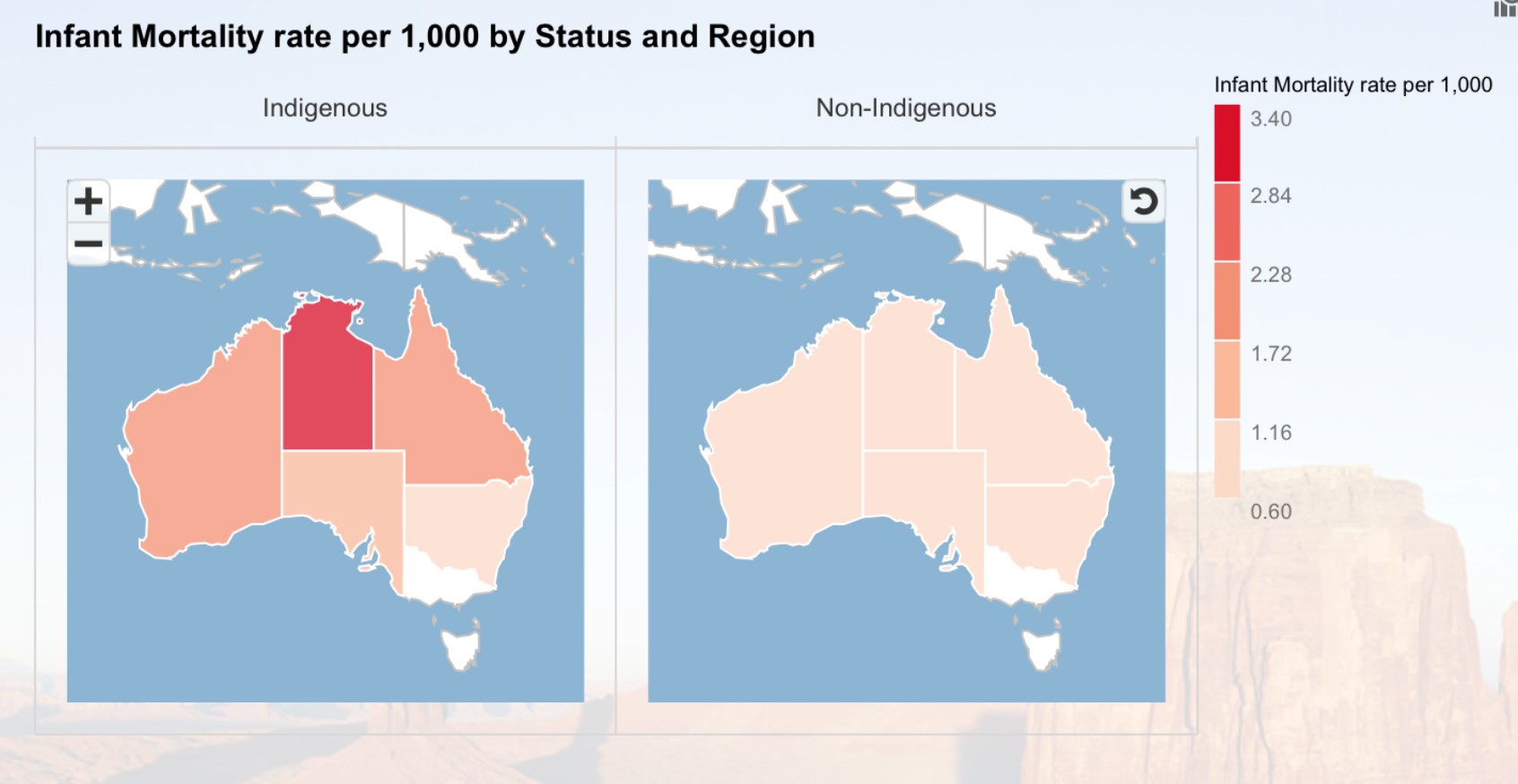 Therefore, more support should be provided to not only indigenous but also indigenous people living in remote areas such as NT in order to close or at least to narrow down the infant mortality rate gap between indigenous and non-indigenous.