Crime in NSW by Indigenous and non-Indigenous Australians 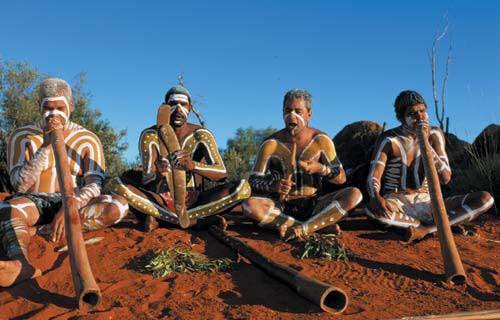 Regardless of whether you have experienced theft or damage of your property, suffered a violent attack, had someone close to you hurt or killed, or witnessed some other crime or incident, the impact can produce a variety of emotions and reactions in you and those close to you, including any children, been aware of this crimes, knowing the root and possibility of occurrence amount individuals is one of the first point of consideration, which is what this blog is about.

As post Graduate students studying at Victoria University, we are writing this blog as part of our course fulfillment for Business Analytics(BCO6007), this has been a challenging yet intriguing experience and we acknowledge our unit Coordinator Paul Hawking and PARVES, Ahmed, the Lecturer for been there throughout the semester.

We have taken data from the NSW police force and NSW health statistics to help us analyze crime rate in NSW among Indigenous and non-Indigenous Australians using SAP LUMIRA which is a self-service business intelligence for business analytics. This allows users to access, connect and visualize data with ease. The Indigenous people are the original owners of the land also known as Aboriginals and are only 3% of Australians Population while non Indigenous people are migrants from country’s like Europe, America, Asia etc. who have come to settle in Australia. 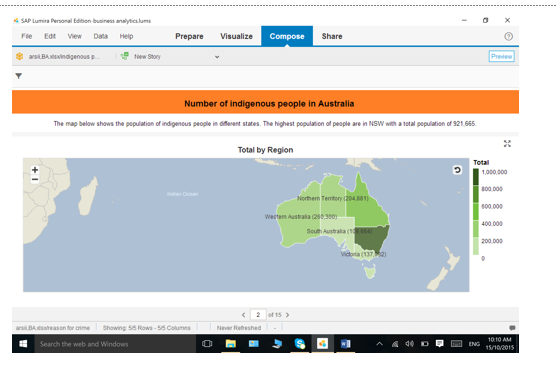 This map was used to determine the state with the largest population of Indigenous people in Australia and NSW came first with a population of 921,665 people 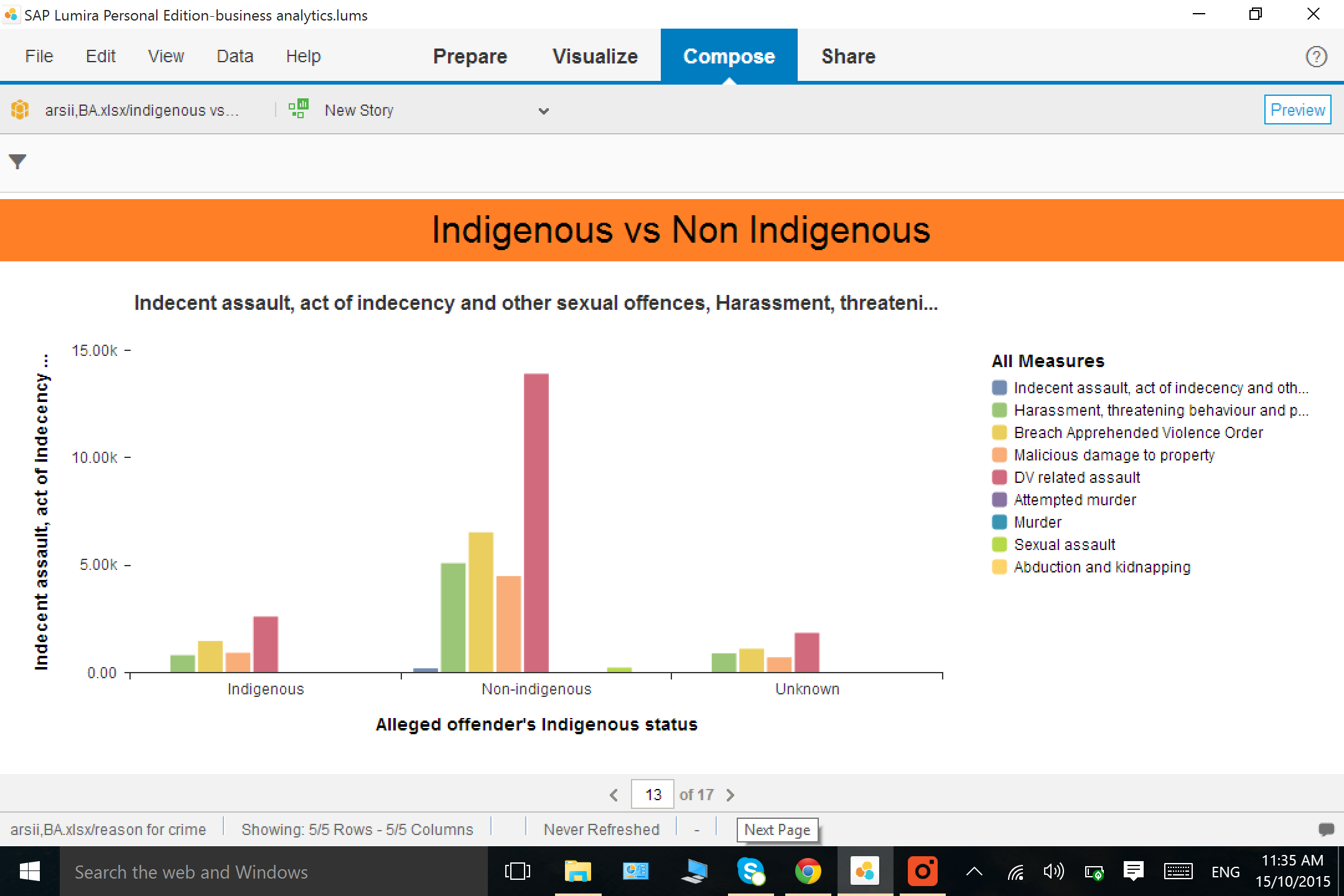 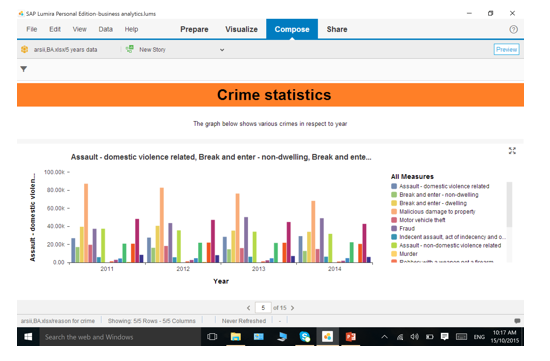 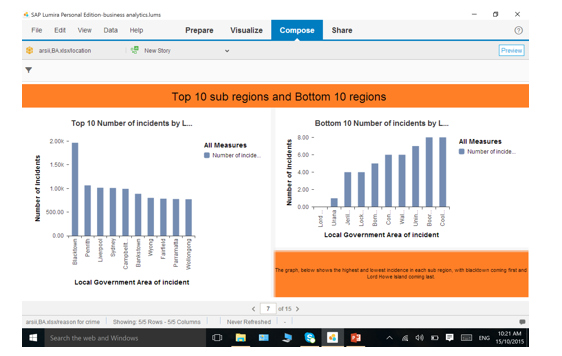 This graphs shows the top 10 and bottom 10 subregions with total number of crime and as shown Blacktown comes first while Lord Howe Island comes last. 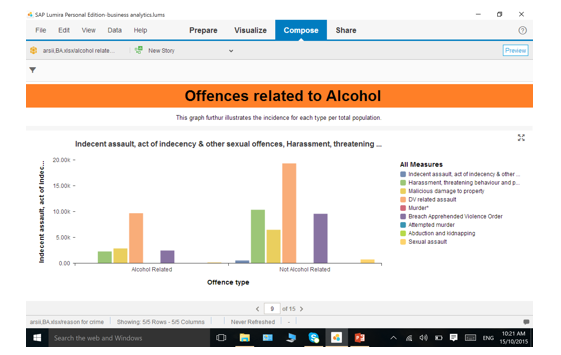 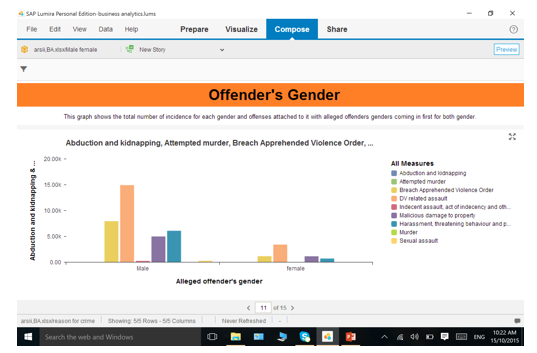 This shows the gender of people and the various crimes and as seen, high crime rate occurs mostly with men. 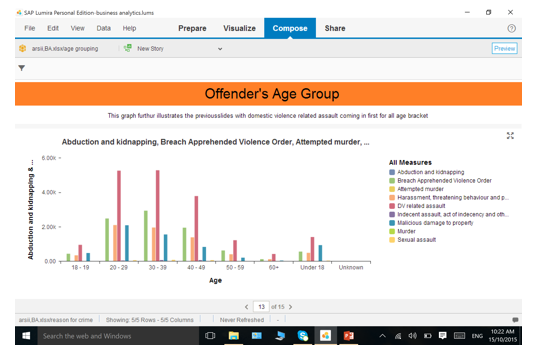 This graph shows the age bracket of people and total number of incidence. People in the age bracket 20-29, 30-39, 40-49 commit more domestic related assault, followed by breach apprehended violence order while those in the range of 60+ commit less of this crimes. 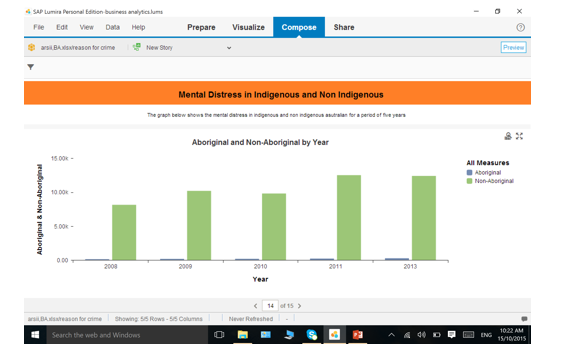 This result shows how mental stress contributes to crime occurrence and which people seem to commit more of this crime. The non-indigenous people commit more crimes as shown than the indigenous people but one can also say that this reason could also be from the fact that only 3% of Australians population are Aboriginals.

Conclusively one can say, crime is almost inevitable in our society today ranging from domestic violence to murder, assault, kidnapping etc. These crimes occur in different forms and there is no exact solution on how to handle it, however there are recommendations on how to curb crimes.

For victims of crime, making decisions can be difficult and confusing. It is important to know how or where to get information and support. During this difficult time, it is vital that a victim is treated with courtesy, compassion and respect.

Link below will take you to video demonstration of our work.

Great job Abrar and company!
Very informative. Keep it up.