Closing the Gap in Indigenous Education.

We are a group of Post Graduate students from Victoria University who currently taking the subject of Business Analytics (BCO6007). Our lecturers, Paul Hawking and his staff, have introduced us to SAP Lumira as one of the tool for data visualization. One major assessment has been assigned to the students in order to have deeper knowledge in utilizing SAP Lumira.

After getting the topic of the assessment, which is about disadvantageous of Indigenous vs. non-Indigenous, we started to do some research from number of journal articles, reports, books and videos to get a clear picture in the related areas of the topic. As the result of our first stage of our findings, we decided to focus on the education field as several studies have shown that education is a major factor to closing the gap between Indigenous and non-Indigenous society. Further, we did more research to get some relevant data with a view to analyse the factors that affected the gap between the communities.

Given this opportunity, we would like to share our analysis of the gap in education between Indigenous and non-Indigenous Australians community.

“Education is an important means by which individuals can realise their full potential and make positive, informed choices about their lives” – Western Australian Aboriginal Child Health Survey [5].

Having a good education can have an effect in the job prospects, help in socializing with valued qualities of character and behaviour, as well as support in economic, cultural, and social life. Therefore, participation in education or the educational attainment is recognised as a life changing factor for the social well being of all Australians. It is specifically important for Indigenous Australians who have lower levels of educational attainment than non-Indigenous Australians. In addition, it has been become a major strategy to ‘close the gap’ between the Australian Aboriginal and Torres Strait Islander with the non-Indigenous populations.

Moreover, as Visualization 2 shows below, the proportion of education status of Indigenous who completed year 12 or equivalent is less than half of the non-Indigenous percentages.

We can understand that the main reason for Indigenous population having small number in employment and attainment in year 12 and equivalent is due to the decrease in the retention rate from year 10 to year 12 as it shown at Visualization 3.

Apparent retention rates provide an indicative measure of the number of full-time school students who have stayed in school, as at a designated year and grade of education. It is expressed as a percentage of the respective cohort group that those students would be expected to have come from, assuming an expected rate of progression of one grade per year [2].

In the Visualization 4, it can be seen that the trend of general ARR from 2000 and 2014 between Indigenous and non-Indigenous has been improving over the years, however there is still a gap in between that puts Indigenous community at disadvantage.

Several reasons that leverage the gap as well as the completion rates for Indigenous students have been revealed by certain researchers, such as due to the geographical access, student’s attendance, achievement and school performance [3]. The factors that are involved in causing the number of students attending school could be from the combination of home, school and individual itself [4]. Purdie and Buckley (2010) [4] highlight the importance of school attendance in concerning to achieve core skills of education, for example literacy and numeracy skills. They also mentioned that students who always miss school are likely to experience indicative disruption to their education. Based on these, we can say that Indigenous students whose performance are low in school or who always miss the school are more likely to experience early drop from school which leads to the lower ARR number in higher education.

Reid (cited in [4]) also exhibits several other factors causing the non-attendance of students, in particular to Indigenous students:

In this report, we have limit our research of the factors that affecting in decreasing number of ARR to four points that we presume it might have the most influence to retention rates.

But before that, we are going to further analyse each reason, explain the rationale behind why we choose to focus on education and why we think education is the main major to close the gap.

Accordingly, based on the data that we found in Visualization 5, we can infer that the education level plays a vital role in the social well being. As we can see in the Visualization 5, the difference of employment status, health risk causing by alcohol consumption and tobacco between the Indigenous Australians who complete Bachelor degree or above with Indigenous people who only finish before year 10 are quiet significant [1]. Based on these facts, we are determined to have a closer look at education factor.

The Factors affecting the Gap

Moving on to the factors that make a gap between Indigenous and non-Indigenous, as we mentioned before, we have limit our research to four main points.

Remoteness. The first factor that we think most affecting of the retention rates of Indigenous students is the distance of the school facilitation from their community or the facility that available in their community.

Visualization 6 and 7 displays the population number of Indigenous and non-Indigenous in several categorized regions in the overall of Australia areas which have an effect to the attendance number of the students. And, in the Visualization 8 explicate the number of Indigenous people who complete year 10 or 11 and year 12 or equivalent based on the area that they are live in. (this may be due to the lack of access to higher education in Remote Areas as well as movement away from Remote Areas for greater education and work opportunities)

Crime rate. Another aspect that we presume as an indicator that influencing in the ARR is the number of Indigenous community that committed at the crime rate. From the Visualization 9 it can be explained that the number of Indigenous people who committed the crime and may also end up in prison is highest at the age groups of 15-19 and 20-24 which is the prime age to attend the high school or university. 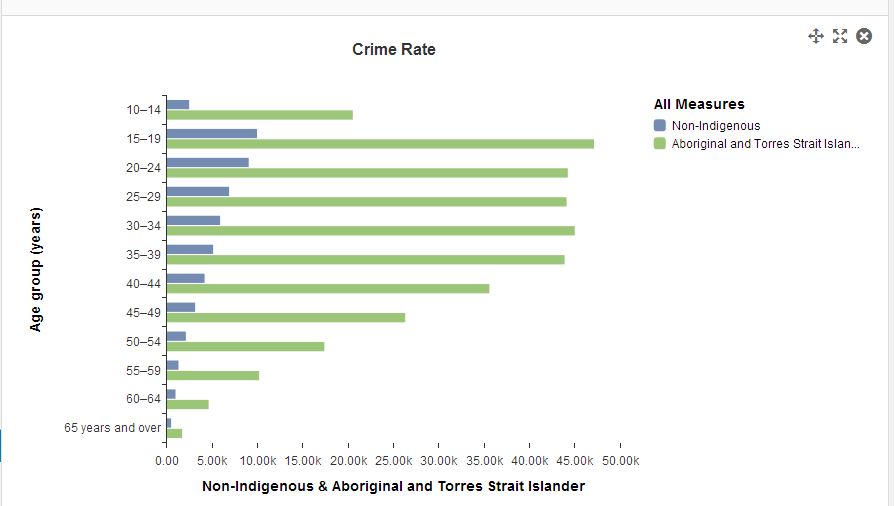 Finance. The rate of income in the family of Indigenous community has also become our concern to look for. Visualization 10 shows the possibility of Indigenous and non-Indigenous society to raise $2000 within a week. Based on our finding, the non-Indigenous people are easily could get $2000 within a week. We used this data so that we could assume this as a weekly income. From this finding, we take suspect that the elderly of Indigenous students will need them to help in their finance for daily living, so it will affect to the school performance of the students. 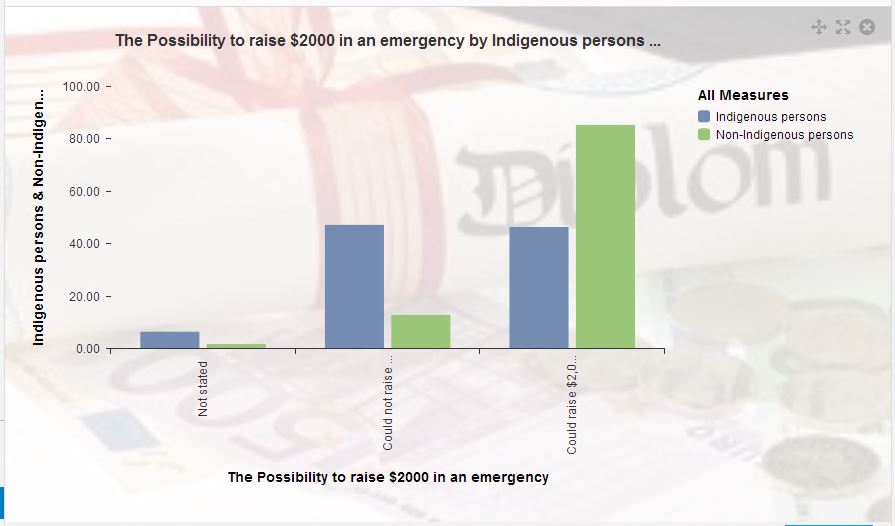 To summarize our findings, we can infer that gap in the education between the indigenous and non-indigenous is narrowing down from the year 2000 to the year 2014. However, the gap still remains due to various reasons such as the school location, facility available, crime rate, financial stress and the discrimination. If there are any improvements in these areas, it is safe to assume that the gap in education between the indigenous and the non-indigenous can be narrowed down. Out of curiosity we took advantage of SAP Lumira’s Predictive analytics to predict when the gap in education will be completely eliminated and according to the SAP Lumira it is likely to happen in the year 2017 which can be seen in the Visualization 12.