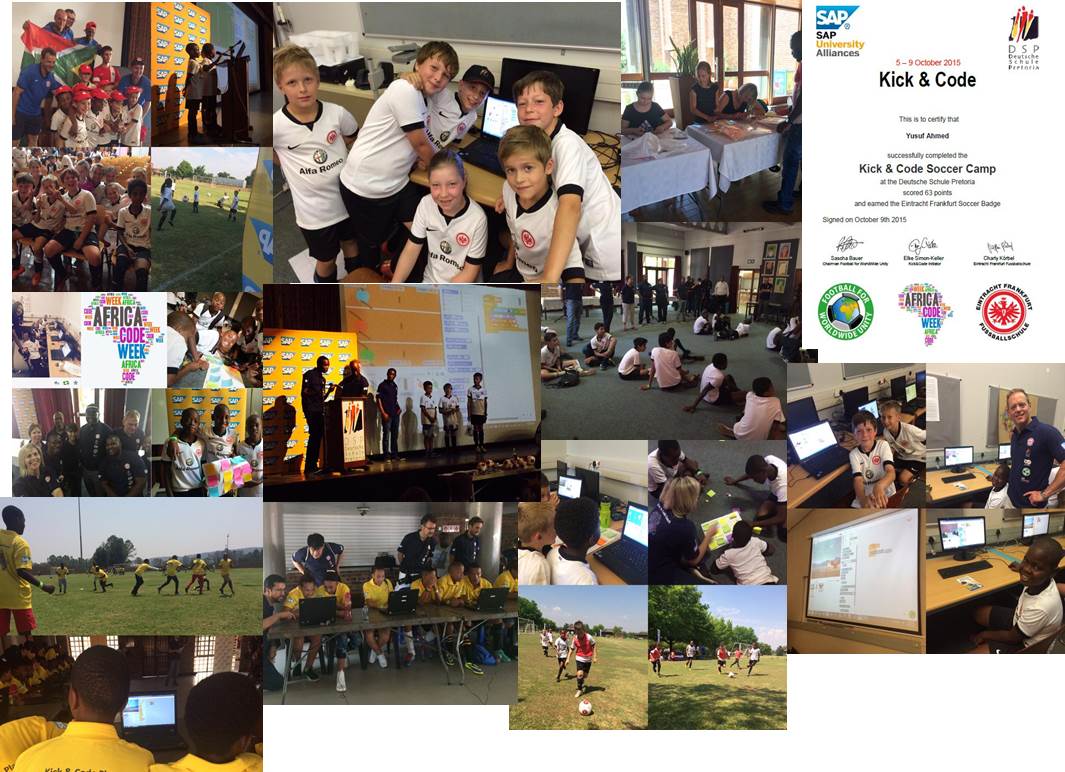 As part of the Africa Code Week initiative that ran from 1 – 10 October 2015, a highly successful Kick and Code camp was held at the Deutsche Schule Pretoria from 5 – 9 October 2015. The fun program, targeted at youngsters from ages 8 – 14, was held in conjunction with SAP University Alliances Africa team, Eintracht Frankfurt FC, Football Worldwide and the South Africa Football Association (SAFA). A total of 108 children participated.  Of these 20 children from economically-disadvantaged schools, who excel in football, were invited to participate in the week-long event.

Each day, students were divided into two groups according to their ages. Whilst one group was busy being coached in football skills on the field, the other group of students were coached on how to write software programs. At the end of each 90-minute session, the children swapped places in the lab for the pitch, and vice versa.

The coding sessions were led by four coding experts from SAP, ably assisted by other SAP volunteering staff members, who introduced the children to software coding using a program called Scratch®. They were taught how to develop various games such as “the crab and the cat”, “stick man” and “ping-pong”. This was a precursor to enable the children to conceptualise and code their own games. A full day, on Wednesday, was dedicated to teaching the children the principles of Design Thinking in which they were encouraged to brain-storm ideas and solutions in groups. The last two days of coding were used by the children to develop their own games which were judged on the final day.

The football sessions were led by coaches from Eintracht Frankfurt FC, Football Worldwide and SAFA, thus exposing the children to international football techniques and practices.

The final day of the code week culminated in a football match between the coaches and SAP staff members, a braai feast and prize-giving ceremony for the best apps developed and football skills. Each child also received a certificate and medal of participation.

On the following day, Saturday 10 October, the program was extended to the Eersterust stadium where 148 children from 10 economically-disadvantaged schools in the suburbs of Eersterust and Mamelodi (in Pretoria) were invited. The kids had fun whilst being taught how to use Scratch® as well as a coaching session with the football coaches.

The SAP UA Africa team was very instrumental in the operations and co-ordination of the Kick and Code week.  For more information on Africa Code Week, please follow the link: http://africacodeweek.org