After you import a Support Package for your SAP NetWeaver BW you notice unexpected values/numbers when consuming a BEx Query (or even a BW Infoprovider directly) or reading characteristic values (F4 value help).  The unexpected data is propagated to all front-ends that consumes BEx Queries, such as Web Intelligence (WebI) and other BO tools, Bex Analyzer, Analysis for Office (AO), Business Planning and Consolidation (BPC), Java Portal and many others.

There are two possible reasons for that. Let’s take a look below:

In the first scenario this unexpected data is really a bug in the system so we can call that wrong/incorrect data; whereas the second scenario is just a misunderstanding of query results due to the query complexity. To distinguish between the two situations, SAP has some consulting notes that provide guidance on how to check that. See the notes below:

So let’s assume you have already gone through an in-depth analysis and now you pretty sure the issue is really about wrong/incorrect data.

The OLAP processor delivers complex optimizations that safeguard system performance even when complex InfoProviders and queries are processed. In rare cases, these optimizations can cause undesirable side effects or, in the worst case scenario, incorrect data. Generally, errors of this type are very difficult to identify and might not even be noticed by the end user.

Therefore, SAP recommends that you implement the corrections for all known problems associated with a specific Support Package level and for that, development support maintains collective notes about incorrect/wrong data for the most recent BW releases and SP levels.

These SAP Note groups together corrections for certain Support Package and higher levels. The corrections are listed in the related SAP Notes section, see screen print below. 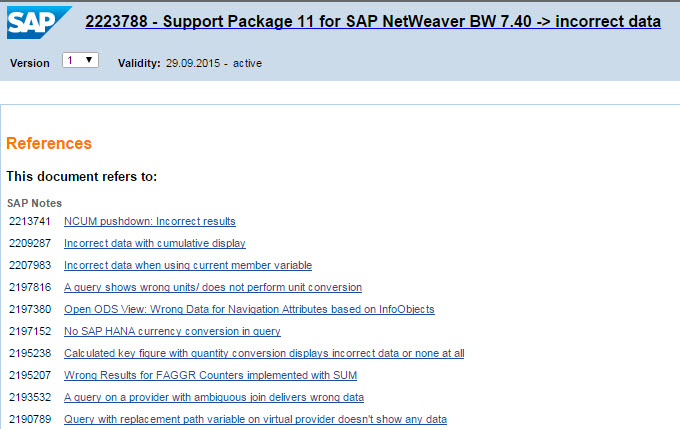 This is the beginning of the list of notes that address incorrect/wrong data available for SAP BW 7.40 SP 11 and higher.

It’s recommended to implement all SAP Notes in ascending order based on the SAP Note number.

And here is the list of collective notes according to BW releases and SP levels:

In case that does not help and you need to open an Incident with SAP support , it helps a lot to simplify analysis, and thus speed-up overall incident processing, if you follow the tips described on the following notes:

How to verify a Workbook last used date

Bex Query going into debug mode in RSRT? Check here how to find the solution

Thanks for sharing useful notes information.

Thanks for the info