Ada Lovelace day. A note to men in the software industry.

Today is Ada Lovelace day. If you work in computer science or the computer industry, and you don’t know who she was, please take a moment and google her. But briefly, without her, we would not have a software industry. She was the first programmer, ever. By remembering her pioneering, yet until recently, unheralded efforts, it brings home the point that we underestimate the impact that women have had, have, and will have on technology and how you make your living.

The state of affairs today is still less than ideal. Look around you. I bet that men outnumber women by 3 or 4 to one.  This is not really on. Heck, in the 1960’s the our industry was more welcoming than it is today. Female programmers put a man on the moon.

Many companies and univesities have noble initiatives to help address the problem, yes, attracting women into the industry is a challenge. But the bigger challenge is having them stay and thrive. My view on the main cause of this dismal state of affairs is simple. Men need to change their behaviour. It is time that we actively addressed the issues that drive women out of the industry. 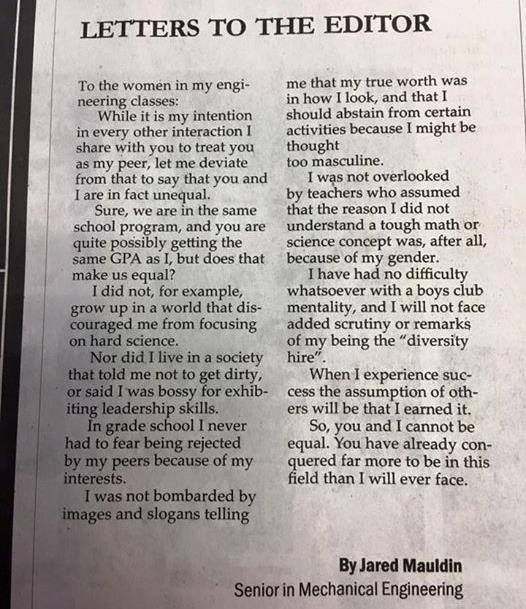 To the men, reading this. It starts with you.

What are you going to do today, tomorrow and next week to help fix this problem?

Wow!  What a fantastic and powerful message.  Thanks for writing this blog, Thomas.  I'll be passing it on!

I second that! Will share as well. Thank you Thomas!

Her name is Ada, like the ADA programming language, named to honor her.

Thank you, Thomas, for this fantastic post.  Our world would be so much richer if everyone's ideas were valued equally!

This blog gets a big smile!

And for the women reading this: Don't wait for the guys to fix this problem for us.

Interesting thought experiment: Try reading the letter to the editor as if it was written by a woman, addressed to "the OTHER women in my engineering class". Are we really all still facing these issues or are we making them up in some cases, looking for excuses? I personally haven't made these experiences. Have you?

I am not happy to see what happens in my native country now, it looks like huge steps back the last 5-10 years, from flights to the Universe back to the Middle Ages... Mathematic school without girls just because they don't want to have girls sounds badly, and real young people, not Internet anonyms, who support this decision sounds twice badly. Seems they just don't know that IT jobs were more for women till middle of 90th by us, men considered those tasks "too boring".  😆

But even in some countries where feminism seems winning you can still hear e.g. "kindergarten or private groups under 2, (3, 4)... years are for working class only, they hurt your children, they will have no success in their future carrier, stay at home and take care of them otherwise you are a bad mother".

So "why should girl and girl's parents invest time and money into learning and studying STEM if she have to break her working life for years and can hardly come back?"

I can discuss this topic hours and hours, really. 😐 But it's nice to see this article written by a man. 🙂

Thank you very much for adding this global perspective, it's easy to forget (and sad as well as shocking to hear) that a lot depends on country and culture. And that there are reactionary movements going on in quite a few countries nowadays that are taking back all the progress made in the past.

I'm glad you haven't experienced it, but I have experienced way too many examples.  Just this past year someone I work with said something to the effect of well it has to be a guy reading this text because the voice needs to sound authoritative.  Luckily it was not something overly important so I used it as an opportunity to speak to the person about what was said.  My other colleagues were happy I spoke up.  So what does that mean if there is a role open and this person thinks the hire for the role needs to be authoritative?  Will this person only look at men to fill the role?  Was this statement harmless or an indication of what this person might think in an employment situation?

In college I had a professor who told offensive jokes.  I discussed this with my male classmates and they agreed they could see how the jokes were inappropriate and alienating for women.  Only because I had the encouragement from mentors I managed to bring these issues up with the professor and was told by other students that he did better in future classes eliminating some of these jokes from his presentations.

Let's try another thought experiment - what do you do to make things better if you see a situation like the ones mentioned?

Again, it depends on where do you live and work. Only small percent of women on the planet have a possibility to claim to HR/Senior manager, to change their job easily, to leave an anonymous comment on a web-page with employer ranking.

But most of us grew up and live in "you-should-always-be-a-good-girl" mentality. I never know what advice I can give to those women whose mothers, sisters and friends telling that no reaction is the only proper way otherwise they will soon have problems and it will be only their fault... Unfortunately in case of small town and/or poor country it is often so, woman hardly helps woman if woman breaks the "main woman responsibility of being good".

That's such a great blog Thomas!!! It's so nice to see this perspective!!

Ada Lovelace has long been a hero to me, and yes, I've known who she was and what she did for all of my working life. I agree, all who choose to make software, computers, or IT their career should know the history of their chosen profession, and the giants upon whose shoulders we all stand today, and it's good to be reminded from time to time.

My team today, twelve SAP support professionals, includes four women. The ratio used to be higher, but one left to become manager of another IT development team, and her replacement is male. We don't actively recruit women, but women frequently make up the best candidates we attract. I'm not sure of the ratios in our IT department as a whole, but my general impression is that on the other software development teams, women make up about half of the developers. On the Server/Network/PC Technician teams, however, they number quite few. One of our top Network Engineers is a woman, but she is on a male-dominated team. However, our Project Managers and the various IT Managers are mostly women -- they dominate in the management ranks (though my boss is a man, but his boss is a woman).

Several years ago I saw a very hurtful comment in a local blog all about my employer (I work for a school district, so quite a few citizens are very engaged in all that we do). The comment ran something to the effect of how half of our IT department was women because women are incapable of competing for the best IT jobs in "real" high-tech companies, and as an underfunded agency we can't attract the best talent, who are all men. I took great exception to this comment on a number of fronts. Well, obviously, for one, it implied that everyone on my team was sub-par, including me, as otherwise we would be working for a "real" high-tech employer and not a school district (some of us are motivated by doing good in our communities more than making a bit more money -- and the extra vacation days are a nice incentive, too). But, more importantly, it denigrated the very possibility that a woman could ever be as good as a man at anything high-tech.

That clearly flies in the face of the whole history of our industry, most especially giants like Ada Lovelace.

Furthermore, I would challenge anyone to achieve as much as we have with as little resources as we have. We couldn't do what we do if our people were not among the best out there. Being resource-constrained, everyone on our team has to be ultra-resourceful and self-sufficient.

Beyond that, outside my own little public sector bubble, my wife, who is a mechanical engineer and project manager, works in the IT department of a company that embodies the very idea of high-tech (they put stuff in space, among other things), and many of the developers and engineers she works with are also women.

As Thomas said, it may have been a man who first set foot on the Moon -- but women in high-tech put him there.

Thank you, Thomas. It's always good to have a reminder.